According to international real estate consultant Cluttons, Bahrain's current economic stability has begun to impact its residential property market with stabilizing rates and encouraging tenants to turn their attention to quality property options. 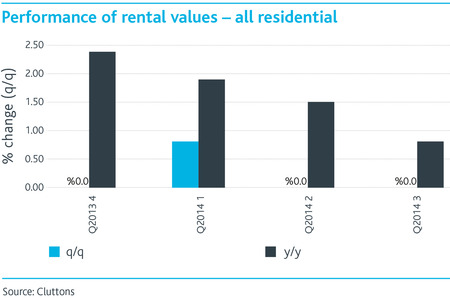 Cluttons' Winter 2014 Bahrain Residential Property Market Outlook, indicates that increased focus on higher quality developments will begin to put rents under strain at the top end of the market. In turn, it is anticipated that asking rates for such properties will start to nudge upwards over the course of the next six months, as the national stability beds in more widely across the Kingdom, driving more rigorous economic activity and therefore, job creation levels.

Head of Cluttons Bahrain, Harry Goodson-Wickes says, "A number of high quality projects are already experiencing increased interest. At the Kazerooni Homes development in Saar for instance, semi-furnished four-bedroom villas are letting for around BD 1,800 per month. Tenants are drawn towards these sorts of top tier schemes by the perceived high quality finishing and relative affordability of rents." 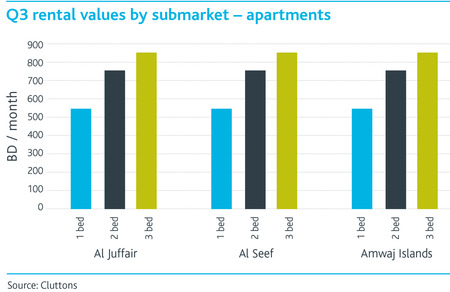 According to the report, proximity to schools has been a particularly strong driver for the relocation of existing tenants, with families seeking out accommodation within easy access to Manama's main schools. While this trend is common globally, it has re-emerged in the Kingdom as confidence and stability return, with households targeting school districts in increasing numbers. Saar has been a key beneficiary of this trend, which has been further amplified by the receding of localized disturbances in this area.

The report also highlights that economic diversification in Bahrain will bring a wider range of tenants to the Kingdom. It indicates that the residential market's dependency on the regular rotation of US Navy personnel is now starting to be complimented by the slight upturn in tenant demand from the education, law and banking, and financial services sectors, with many tenants new to the Kingdom. 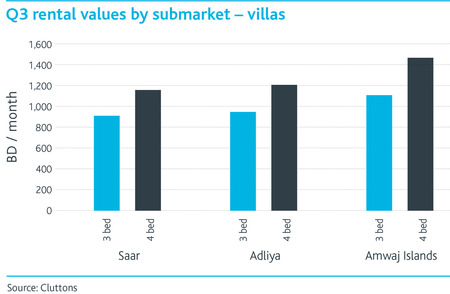 Goodson-Wickes added, "Over the medium to long term, we expect to see an even wider range of tenant requirements, as other sectors of the economy gradually return to growth, creating new jobs and therefore households. We have already seen Bahrain's non-oil sector experience 2.3% growth during Q1, while the government continues its infrastructure investment program, with funding for projects increasing by 2.4% compared to Q1 2013, which in macro terms has translated into rising business activity levels. The real estate sector has and continues to clearly benefit from this."

According to Cluttons, rents across Manama have held steady, over the course of the year, with no change being recorded through the first three quarters of 2014. In fact, rents now stand just 0.8% ahead of this time last year, the lowest rate of annual growth since Q4 2011, when rents slipped by -0.2%.

The report also reveals that during Q3, villas on the Amwaj Islands remained the most expensive in the Kingdom, commanding average monthly rents of BD 1,275, while apartments in Al Seef remained amongst the most competitively priced, with asking rental rates hovering around BD 700 per month. In general, one bedroom apartments (BD 550 per month) in Al Juffair, Al Seef, Reef Island and on the Amwaj Islands retained their position as the most affordable type of accommodation during the third quarter.

Goodson-Wickes concluded, "There is a definite gap in the Bahraini residential landscape for the development of a deeper and more widespread affordable housing program to support and deliver the National Housing Plan.

"We expect Eskan Properties' Danat Al Madina development at Isa Town to be particularly popular for this reason. We also anticipate a significant interest from developers in this area going forward."