According to Cluttons, Bahrain's office market has remained muted in the first quarter of 2015, with rents in Al Seef continuing to fluctuate between BD 5-5.5 psm, while there has been little movement elsewhere.

Overall, the Diplomatic Area and the Financial Harbour area registered rent declines of close to 6% last year, however they have stabilized and no further decreases have been recorded so far this year. That said, the weakness of oil prices will most likely filter through to the office market as overall confidence is dented by the government's falling hydrocarbon revenues.

Take up activity remains generally limited to requirements under 250 sqm, but despite this, developers, still buoyed by the positive sentiment in the market from last year, are keen to progress schemes with large floor plates. This, combined with the down side risks of the low oil price environment, is expected to stifle any strong return to rental value growth in the medium term.

Cluttons short term outlook is for office rents to continue muddling along, with downward corrections likely to materialize later in the year and into 2016 if oil prices remain below the USD 50 per barrel mark.

Furthermore, should the USD 10 billion GCC Support Fund agreed in 2011 for Bahrain be renegotiated as the region's governments feel the strain of falling hydrocarbon receipts, the likelihood of a slowdown in infrastructure project spending will be a very real threat.

Overall take up activity, job creation levels and subsequently, demand in the residential market, are all likely to be impacted. It is still too early to assess the probability of such a scenario materializing; for now it remains a risk we are monitoring closely.

Elsewhere in the commercial landscape, the retail market continues to remain resilient and is still expanding.

The silver lining in the otherwise economically debilitating tale of oil price weakness is a stronger US Dollar, to which the Bahraini Dinar maintains a fixed peg. A stronger dollar will translate into cheaper import costs, which will cascade down to consumers in the form of increased disposable income levels, which suggests a bright short-medium term outlook for the retail market.

This positive and emerging scenario is reflected in the rate of take up of retail units across the Kingdom. At Dragon City on Diyar Al Muharraq for instance, 60% of the 750 retail units have now been pre let, with completion expected later this summer as retailers jostle to enter the market.

International retailers too are mobilizing to position themselves at the forefront of the buoyancy in the market, with Carlo's Bakery from New Jersey being amongst the first in a new wave of brands making their foray into the Gulf. Carlo's Bakery will open its first Middle East outlet at The Courtyard shortly. 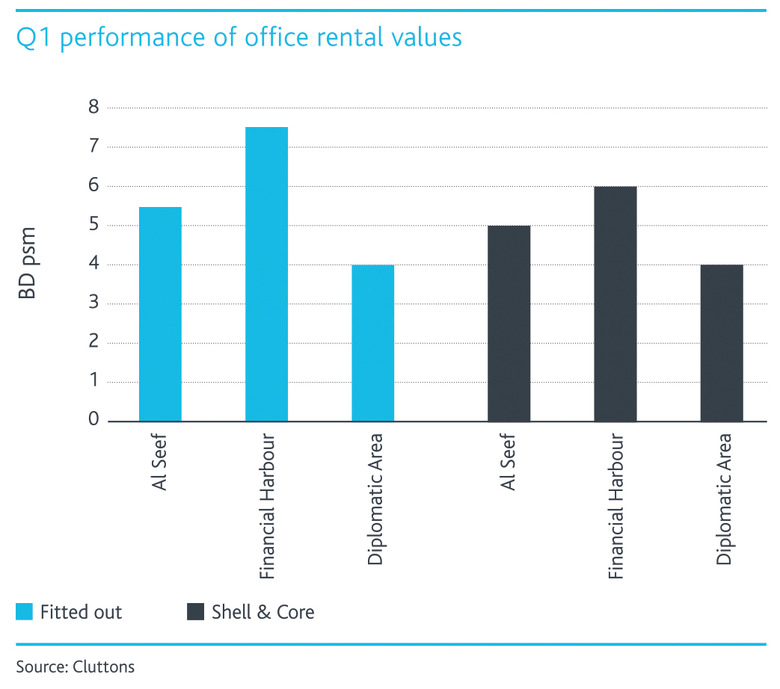