According to international real estate consultant Cluttons, values across Dubai's freehold residential areas slid by 8.8% in 2016, largely in line with Cluttons' original forecast for the year of -10%. This signals the market's weakest annual performance in five years, and sits 28.7% below the Q3 2008 market peak.

Commenting on the residential market, Faisal Durrani, Head of Research at Cluttons said, "While local economic drivers may appear robust, regional and global economic uncertainty has undoubtedly curtailed domestic growth. Despite this, the off-plan residential sales market has remained resilient and in fact accounted for 53% of all deals in 2016, suggesting that investor confidence remains strong. Clearly this has been aided by some exceptionally favorable payment plans that stretch beyond handover, negating the need for financing from the get-go, in addition to attractive gross rental yields."

"Despite the emerging focus on the residential investment market, tenant demand remains mute and has undoubtedly eased over the last 12 months. This contributed to the 9.9% drop in average rents last year. The rate of creation of senior level executive positions has fallen and this is reflected in the lower level of enquiries and budgets we are recording. The redundancy programs in the city's finance & banking sector and oil & gas sector have all but run their course, but the weak global outlook is putting other key sectors under pressure, including the hospitality and aviation sectors, both of which are long standing and historic cornerstones of economic growth. The rapid and sudden strengthening of the US dollar over the last 9 months has added to the challenges faced by the property market."

Part of this overall market weakness lies at the top. 12 of the 32 submarkets monitored by Cluttons registered price declines during Q1, with the Burj Khalifa tower (-6.9%) leading the price falls. Over the last 12-months, the Burj Khalifa has registered a 25% correction in values, making it the weakest performer across the city. Hattan Villas at The Lakes (-13.5%), Hattan Villas at Arabian Ranches (-12.6%), villas on the Palm Jumeirah (-12.3%) and apartments on the Palm Jumeirah (-11%) rounded off the list of the five weakest performing markets over the last 12 months, the Cluttons report finds.

Murray Strang, Head of Cluttons Dubai, noted, "Aside from the ultra-luxury of the Burj Khalifa tower, the lifestyle and destination living appeal of Downtown Dubai has in a way insulated the market's performance from the fall out of global geopolitical events. Bahwan Tower for example, which is located within the Burj Khalifa community, launched in November 2016 and is a prime example of sustained demand, as a strong sales performance continues ahead of a Q4 2017 completion".

Cluttons latest report also finds that a limited number of vacant plots remain within the Mohammed Bin Rashid loop, suggesting that the resilience in values is likely to persist as new opportunities to purchase in this submarket start to diminish. In fact, there was a 47% drop in the number of units launched in Downtown Dubai during 2016, with just 1,431 new homes released, compared to 2,104 unit launches in 2015.

Strang added, "While the short-term prospects appear relatively subdued, our view is that the rental market's fortunes remain tied to the looming 2020 World Expo. At this stage, the mega event is one of the primary upside risks to our outlook. We know from experience that the lag between the take up of office space and the subsequent impact on the residential rental market is usually six to nine months. Construction contracts worth AED 11 billion, linked to the Expo, are expected to be announced throughout the course of 2017, driving up the rate of job creation and tenant demand in its wake, but this is not expected for another two to three quarters at least."

Durrani highlighted, "However before the 'Expo effect' ripples through the market, we expect that rents will continue moderating during 2017, with an average decline of 5% to 7% likely over the course of the next six months. A key factor in the rental market's fortunes will be its ability to absorb the strengthening stream of buy-to-let homes, which has already upset the delicate supply-demand equation. Any impact on the sales market will likely follow, however for now we anticipate capital values will moderate by a further 5% on average before there is the potential for a more stable picture to emerge towards the end of 2017." 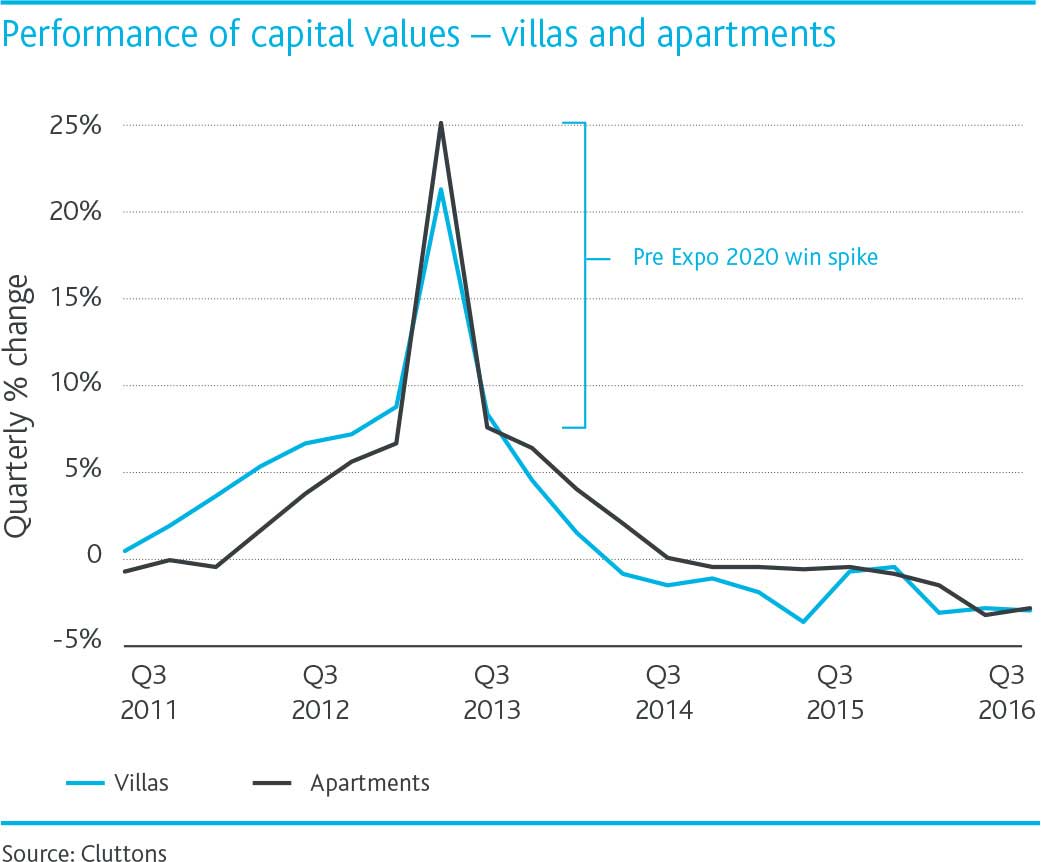