"The ongoing erosion of sale prices is a healthy correction" said Jesse Downs, Managing Director of Phidar Advisory. "The more significant concern is the scale and nature of the upcoming launched and announced projects." she added.

In the first five months of 2015, apartment transaction volumes were down a modest 1.5%, compared to the same period in 2014. SFH volumes contracted almost 25%, over the same period. This is based on initial transaction data from the Dubai Land Department, which is subject to revision.

The report references income specific supply-demand imbalances. The most vulnerable segment is housing supply with current annual rents of AED 100,000 to AED 160,000 per annum, which could be oversupplied by up to 40% in five years.

"If we consider only under construction and launched projects, the majority of the development pipeline is justified due to sufficient total demand," said Ms. Downs. "However, overbuilding in the mid-high income segment likely will increase competition and lead to supply reordering," she said.

The potential for total market disequilibrium increases significantly when adding announced projects into the supply pipeline. Total market vacancy could reach 11% by 2020. Factor in a healthy frictional vacancy and the total vacancy rate converts to a 7% oversupply.

"There is an opportunity to reposition upcoming products to meet the city's anticipated housing needs," she said. "If current announcements convert into launches, the probability for instability by 2020 will increase significantly," she concluded. 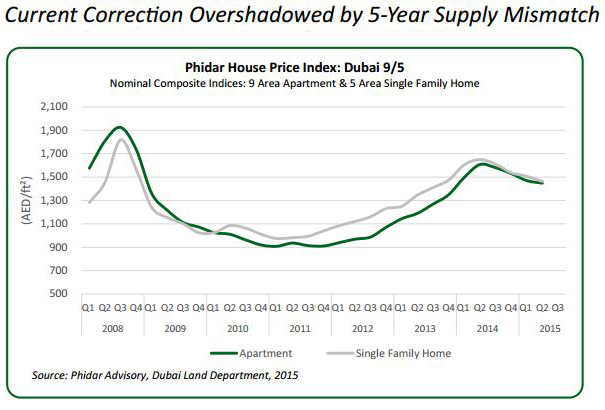