According to international real estate consultant Cluttons, the global economic anxiety and growth slowdown across regional markets has played a significant role in the decreased demand for industrial real estate in Dubai, which in turn has led to capital value corrections in most of the emirate's submarkets.

Cluttons' bi-annual Dubai Industrial Market Bulletin for Spring 2017 shows that activity in the sector has curtailed, despite it being amongst the most resilient in the emirate over the last two years. The research asserts that values are still perceived to be lean however, and notes that some opportunistic purchasers are now making acquisitions in secondary submarkets.

Faisal Durrani, head of research at Cluttons said, "Aside from a natural cyclical correction that was inevitable in the industrial market, a surge in newly completed warehouse space over the last year or two has prompted a flight to quality amongst existing occupiers, creating a growing pool of more secondary space, which is slow to let. This is driving a growing gulf in rents between older stock and state-of-the-art, modern warehouse facilities.

"While we expect the weakness to linger this year, opportunistic investors have been quick to capitalize on the quieter conditions, prompted by sliding capital values, particularly in more secondary locations where values are perceived to be lean."

As highlighted in the Cluttons report, certain stocks in JAFZA faced price drops of up to 20% over the course of 2016, largely due to the migration of occupiers from older to newer facilities within the area. JAFZA north, the original home of JAFZA, is experiencing a rising amount of secondary stock as occupiers are drifting to new facilities in JAFZA south. This has prompted JAFZA authorities to entice occupiers by offering operational incentives, including the reduction of overall set up and licensing costs. Moreover, the report mentions that Class A rents, have demonstrated greater stability, with 8 of the 12 submarkets that Cluttons track registering no change in 2016.

Murray Strang, head of Cluttons Dubai said, "Despite the sluggish conditions, we continue to record an interest from international occupiers trying to gain a foothold in the market as they still view Dubai as the primary gateway to the Middle East and Africa. In particular, logistics and distribution centres remain popular amongst retailers and food and beverage occupiers, buoyed by the strength of Dubai's tourism & hospitality market. To an extent, logistics and distribution have compensated for weakness in other industrial sub-sectors, such as manufacturing, heavy-metals, and oil and gas"

Cluttons' industrial bulletin confirmed that build-to-suit facilities remain popular amongst cost conscious developers and occupiers, particularly those unable to locate and secure large amounts of space. Carrefour, for instance, has recently opted for the construction of an 800,000 sq. ft, built-to-suit premises to support their extensive regional supermarket network. Following the trend, Landmark, Mohebi Logistics and Aramex are also constructing big box distribution hubs in Dubai to expand their abilities in the region.

Strang concluded, "We expect logistics and distribution assets to continue to perform well over the course of the year, driven by an active domestic economy and sustained growth in the tourism & hospitality sector. The looming 2020 World Expo should aid the emergence of a more stable picture towards the end of 2017." 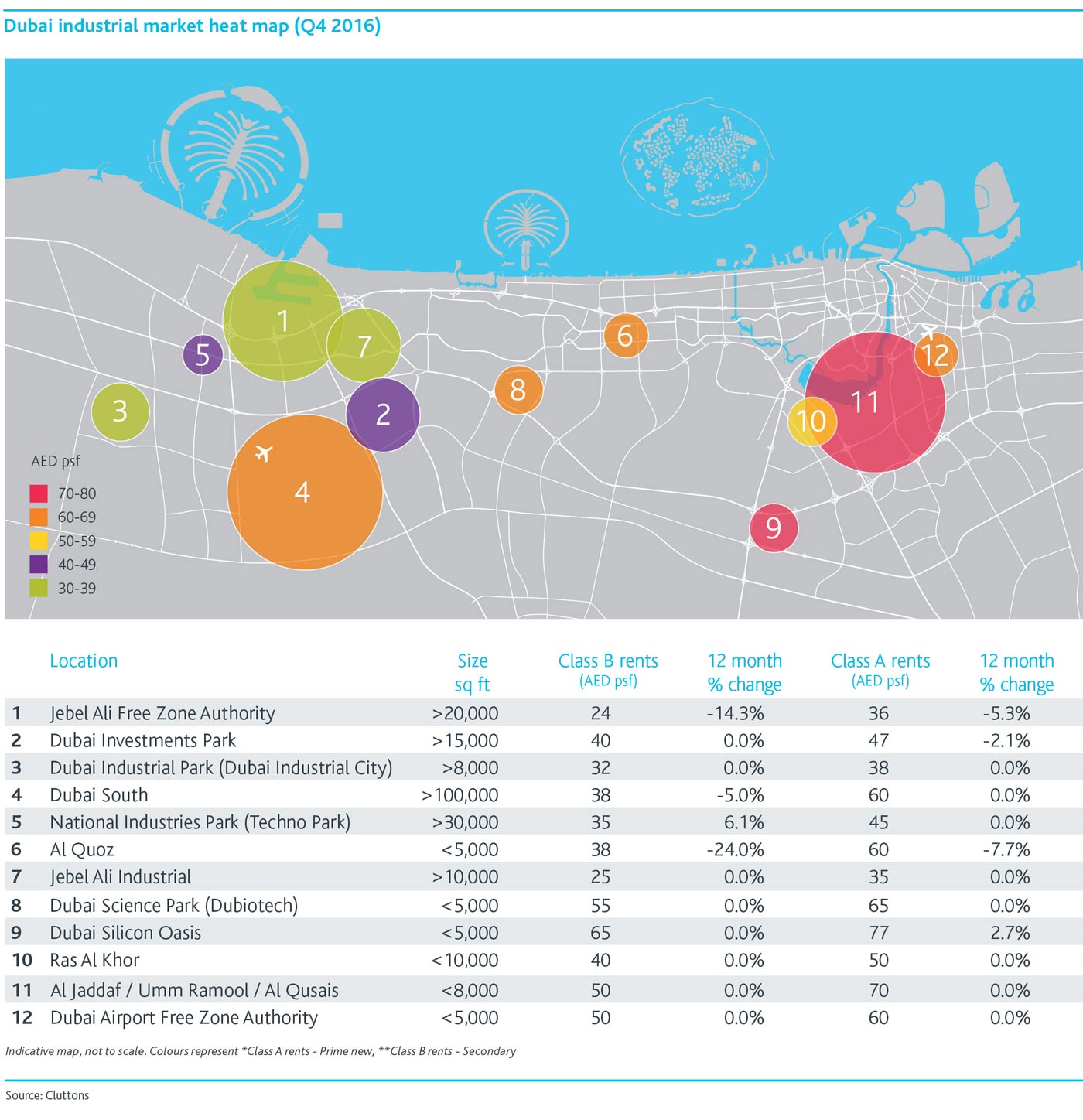