According to international real estate consultancy Cluttons, demand in Dubai's commercial market remained buoyant in the first six months of 2016, with business tenants moving and expanding their operations in greater numbers towards Dubai South, pre-empting the expansion of Al Maktoum International Airport and the World Expo in 2020.

Cluttons' Dubai Summer 2016 Industrial Bulletin shows that with the seasonal push for logistics contracts heading into Q3, key areas such as JAFZA (Jebel Ali Free Zone Authority) and onshore locations such as DIP (Dubai Investments Park) continue to command a great share of occupier interest, while Dubai's Logistics City in Dubai South is one of the largest industrial submarkets under construction in the UAE and has already attracted a number of high profile occupiers including Integrated National Logistics, Emirates Sky Cargo, Aramex and Panalpina.

Faisal Durrani, Head of Research at Cluttons said, "Interestingly, rents for Class A units in areas around Al Maktoum International Airport now stand at AED 60 psf, the same level as at Dubai Airport Free Zone, which goes to show the rising popularity of areas towards the new airport, where the next stage of expansion is set to be announced in the near term."

Cluttons latest research shows that Dubai's most expensive area for Class A and Class B industrial space is Silicon Oasis, where rents stand at AED 77 psf and AED 65 psf respectively. Jebel Ali Industrial Area remains the most competitive area for Class A space with rents standing at AED 35 psf, while secondary space at Jebel Ali Free Zone is the cities lowest, at AED 24 psf.

Durrani, continued, "Our research shows that although prices across the leasing and sales markets have softened over the first two quarters of this year, the volume of transactions has been maintained, with a number of deals being recorded across the market in both free-zone and non-free-zone areas."

According to Clutton's report, activity levels are also rising in new locations across the city, including Dubai Science Park (DSP), where a second phase of warehouse space has been commissioned and is expected to be completed in 2017.

The report highlights that build-to-suit facilities have increased in popularity over the last 12 months, with Dubai South and JAFZA being the focus of such activity. The government has been quick to react to increasing demand and has moved to support growth, recently announcing that international developers and investors will be permitted to buy land in key freehold areas of Dubai South, although it is not yet known what use permissions will be available. The new Dubai Industrial Strategy was also launched at the end of June, with an aim to enhance its image as a platform for innovative industries in an environment of growth and sustainability.

Murray Strang, Head of Cluttons Dubai also said, "Looking ahead, it is our expectation that rents for warehouses will continue to remain relatively unchanged over the next six to twelve months. With a stable and healthy level of occupier activity and a steady stream of speculative development, we are not expecting to see any major swings in average lease rates.

"Looking further ahead to next year, it is likely that there may be a slight upturn in overall warehousing activity as the World Expo draws closer. We are yet to see a major Expo-linked boost to the market; however this is something we expect will materialize 18-24 months prior to the event. Specifically, we expect to see requirements from the construction, hospitality and food and beverage sectors start to tick up directly as a result of the 2020 Expo." 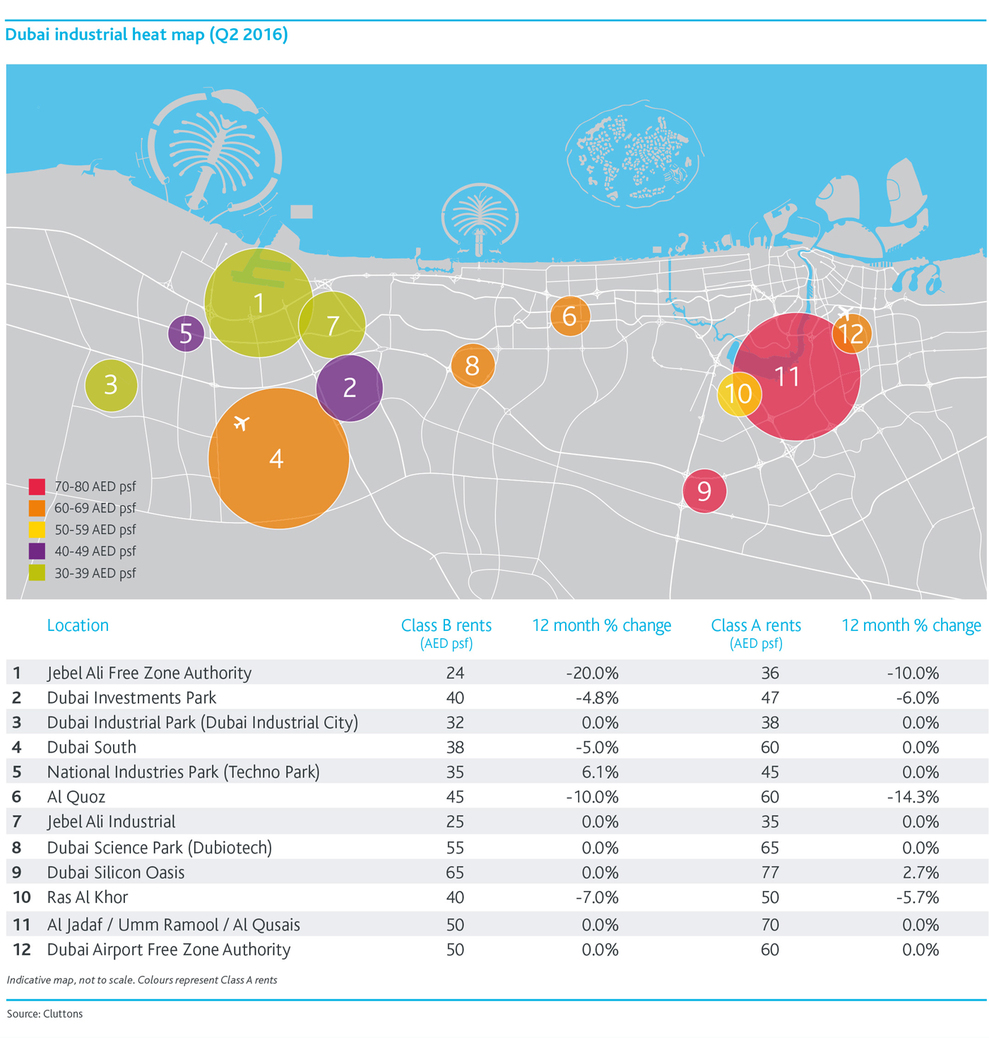