According to international real estate consultant Cluttons, even though Dubai's commercial office real estate market has experienced muted growth over the past six months, the recently announced Emirates Towers Business Park is set to become Dubai's most defining commercial development in over 10 years.

Faisal Durrani, Cluttons Head of Research commented, "As we enter the second half of 2017, we are seeing new major projects being announced and launched in central Dubai such as the AED5 billion Emirates Tower Business Park project, which is located in close proximity to Dubai's financial district. This is a huge positive for the market as the project will meet the increasing demand for Grade A office space through low- and high- rise office towers catering to a range of requirements. Dubai is moving rapidly from being a regional hub to a global one and the new Emirates Towers Business Park is expected to compliment the DIFC, effectively expanding the city's financial district and putting it on a path to rivalling The City in London, or New York's Wall Street."

The development, which is set to help triple the size of the wider DIFC by 2024, will provide a welcome source of relief to the dwindling supply of Grade A space in the area.

Paula Walshe, Head of International Corporate Services at Cluttons explained, "With DIFC regulation, and therefore Free Zone status within this premium zone, the Emirates Towers Business Park will likely relieve demand pressures on core DIFC stock around the Gate, Precinct and Village developments. Already, international occupiers pay more rent per square foot than any other commercial building in Dubai for office space within the on-shore Emirates Towers office building, which is at the heart of this new development. With that in mind we expect demand and rental levels for space in this zone to be strong."

According to Cluttons' bi-annual Dubai Office Market Bulletin for Summer 2017, the overall quieter conditions in Dubai's office market, that began to bed in at the start of the year, have persisted, with weaker-than-normal demand being reported across all quarters of the city's office market.

Durrani said,"Faltering global economic conditions are chipping away at demand, with some reports of deals falling through in recent months due to a more cautious approach being adopted by some multinational organisations. Much of the activity we have been involved with recently has involved a consolidation of operations, across a number of different sectors."

Cluttons, through its Corporate Services team, has tracked a trend this year around the ending of many five-year leases which were initially signed in mid to late 2012 as the market began to rise following the financial crisis in 2009. Occupiers who committed to new tenancies during this period are now faced with new rents that have on average, risen by 22%, if they intend to relocate, or downsize within a prime market. Cluttons cites that this uplift occurred during the period of 2012 to 2015 when rapid rental rises were a feature of the market.

Walshe highlighted, "This is making savings based relocations more challenging even where tenants are significantly reducing their footprint, especially when capital expenditure for fit out and moving costs are factored in."

Cluttons' Office Bulletin shows that Deira was the weakest performing submarket during the first six months of the year with lower limit rents receding by AED 10 psf to stand at AED50 psf at the end of June. At the other end of the spectrum, rents in the Dubai International Financial Centre core remain the priciest in the city, with occupancy levels holding at almost 100%. The strong prestige factor, combined with the attractiveness of operating in an internationally regulated free zone has meant the appeal of a DIFC base has been sustained.

The Business Bay area of Dubai has witnessed a rise in upper limit rents of AED 20 psf, making it the strongest performer in Dubai's Office market, during the second quarter of 2017.

Durrani said, "The uplift in rents in Business Bay has been driven by the emerging shortage of Grade A quality stock in the area, which remains confined to a handful of completed buildings, such as Ubora Tower, for instance, which has a sub 20% vacancy rate. Cluttons does note however that there remains a surplus of Grade B and Grade C space in the area, with more in the pipeline."

Away from Old and Central Dubai, TECOM free zones in New Dubai remain primary targets for many of the city's new market entrants. The persistent demand, predominantly from the ever-expanding technology-media-telecoms (TMT) sector has stoked upper limit rents. In Internet City, Media City and Dubai Knowledge Park area for instance, upper limit rents (including service charges) have increased by almost 5% to AED 220 psf.

Paula Walshe confirmed, "As we previously reported, the depth of demand has resulted in the fast tracking of the 1 million sq ft Innovation Hub, which is reportedly ahead of schedule and due to be completed by late 2018, or early 2019; however much of it is likely to be pre-let, suggesting the upward pressure on rents here will persist. We already have numerous corporate clients vying to get a foothold in Internet City or Media City as they remain amongst the most popular locations for new market entrants, especially those from Europe or the US." 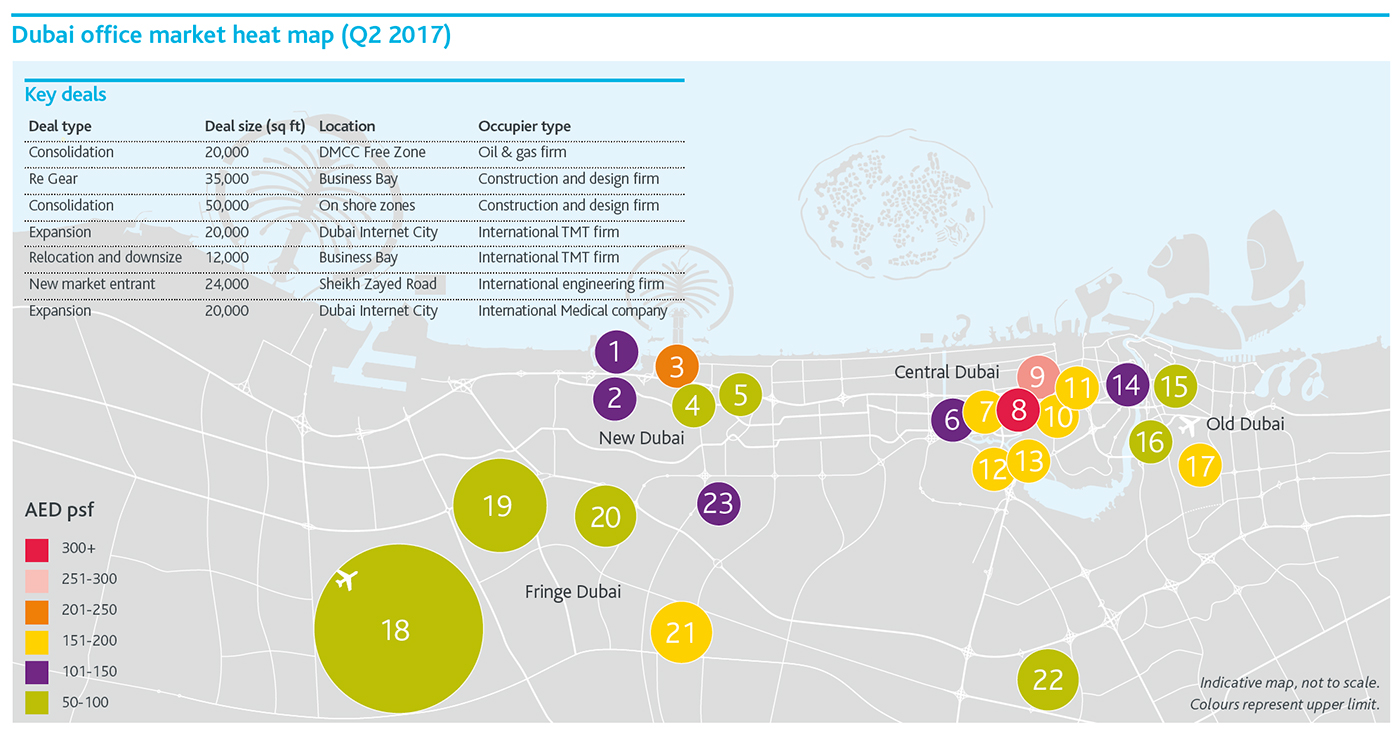