According to new research from CBRE Group, Hong Kong, New York, Paris, London and Tokyo retained their positions as the world's most expensive high-street retail destinations in Q3 2014.

"Even with the somewhat gloomy economic headlines, consumer demand is reasonably firm in most markets," said Richard Barkham, Global Chief Economist, CBRE. "We can expect to see a continuation of the post-crisis pattern of periods of optimism followed by periods of pessimism. The Americas will see stronger growth than the Eurozone, as the latter has been constrained by restructuring in the banking sector as well as overly tight fiscal and monetary policy. Asia Pacific will record slightly lower growth in 2014 over 2013, but is still expected to outpace the other two regions by a considerable margin."

The "Occupy Central" protest, which began late in the third quarter, has not yet materially impacted retail rents in Hong Kong," said Henry Chin, Head of Research, Asia Pacific, CBRE. "We did see lower shopper footfall in affected areas in October; however, the Christmas shopping season will provide some support to retail sales in the final quarter." 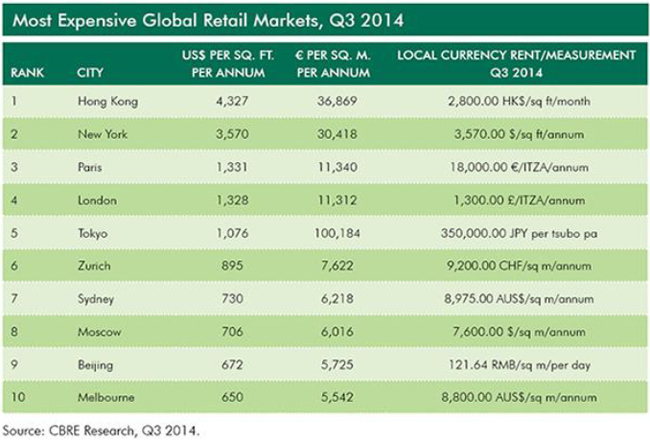 Retailer demand for prime locations in major cities across EMEA remained firm, but rental growth has tailed off, leaving most markets flat in Q3 2014. Hamburg (up 6.5 percent quarter-over-quarter) and Munich (up 5.6 percent quarter-over-quarter) were among the few markets to record growth, reflecting the fact that, despite the recent economic headlines, domestic consumption in Germany remains firm.