According to JLL's latest Land and Residential Market Review, Hong Kong residential prices are now as much as 75.9% higher than the market peak in 1997 after the city was handed back to China twenty years ago. PRC developers continue to pour into Hong Kong's land sales market, snapping up all of the residential sites tendered by government so far this year.

PRC developers, who withdrew from Hong Kong's government residential land sale market after the property market bubble burst at the end of 1997, have been steadily returning to the market since 2011. In terms of consideration, the share of residential sites awarded to PRC developers via government public land sale has gradually increased from 1% in 2011 to 100% so far this year. The names we are seeing in the market has also become increasingly varied.

In terms of maximum developable Gross Floor Area for the residential sites awarded via government public land sale, the contribution from PRC developers in 2016 has also doubled to 4 million sq. ft from the level in 2015. So far in 2017, the total GFA yielded by the residential sites sold exceeds the whole year figures for 2013, 2014 and 2015.

Hong Kong Monetary Authority introduced new management measures for lending to developers in May. These measures target developers, which use a high gearing ratio to finance the acquisition of land and construction costs. In some cases, the amount borrowed for construction was significantly higher than the cost of acquiring the land.

PRC developers are usually more likely to utilize financing early on in the development process compared with their local counterparts. These developers borrowed up to 47% of the value of the land. But the market has seen cases of some local developers taking on syndicated loans where the borrowed amount was as high as 275%. This potentially could have raised the concern of the HKMA. 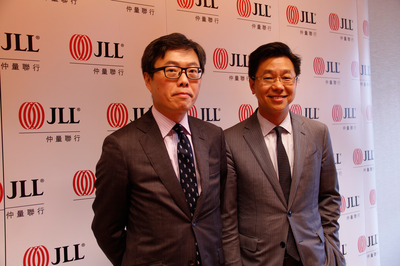 Lau Chun-kong, International Director and Head of Valuation and Advisory Services in Asia at JLL said, "We believe the government's latest tightening measures will limit the gearing ratio and increase the cost of land acquisition and property developments. Local heavyweights, which usually carry lower gearing ratios, will be minimally affected. However, the appetite of small-to-medium sized developers with less robust cash positions could potentially be reduced,"

He expects PRC developers to remain eager in seeking residential development opportunities in the city given the ongoing depreciation of the RMB and their longer-term global expansion strategies.

Our preliminary data shows that capital values of mass and luxury residential rose 9.1% and 7.5% respectively in the first five months of 2017, despite the government introducing new stamp duty measures. Prices of residential properties are now as much as 75.9% higher than the market peak in 1997 and have rebounded by as much as 140.5% from the lows following the global financial crisis.

Leasing activity gathered pace through the first five months of 2017, though ongoing downgrading trends led to a hike in vacancy levels in the top-end of the market. Still, luxury residential rents were able to edge up 0.8% over the same period.

With prices hitting new record highs, developers have increasingly sought to build smaller units, to keep lump sums affordable. The average size of new flats currently under construction stands at about 600 sq. ft, which is the smallest since 2001.

A typical flat now costs about HKD7 million, which about 17 times the average median household income. Nevertheless, the mortgage payment to private household income ratio stood at 47% at the end of May, much healthier than in 1997 when it was up to 100%.

Historically, capital values have trended in the same direction as transaction volumes. Since 2012, we have seen a divergence in this trend, where capital values either continued to rise or remained unchanged despite a drop in volume. We think that the government's cooling measures were a main culprit in distorting market ecology and a sharp drop in transaction volume.

Despite the government's cooling measures, the primary sales market continues to perform well, largely supported by strong pent-up demand from first time buyers, which accounted for about 90% of overall transactions in recent months. The appeal of primary market developments has been supported by developer financing, which helps buyers to get on the housing ladder. Some individual developments have reported as much as 35% of buyers utilizing developer financing but currently accounts for very few transactions in the overall market.

Average monthly sales in secondary market, however, fell 41% in the first four months to 3,515 compared with the previous ten years.  We believe that the secondary sales deadlock is mainly attributed to the cooling measures restricting liquidity in the secondary market.

The secondary market is a huge source of supply, with a total of 1.2 million private units. On the other hand, the primary market accounts for only a small share of the overall market, with the last 10 years (2007-2016) seeing an average of just 10,952 units being completed per year despite the government's intention to lift supply.

Joseph Tsang, Managing Director at JLL said, "Sales activity will be focused in the primary market over the next six months given the new LTV measures and deadlock in the secondary market. This will continue to benefit developers with a line-up of new project launches, against an expanding supply pipeline. Developers will actively readjust to any future government policy, whilst remaining eager in their new launches"

"With the HKMA's new measures unlikely to see changes in the current market dynamics and the impact of the anticipated interest rate rise largely factored into purchased decisions, we expect the capital values across the board to rise 10-15% for the full year. Rental of luxury residential will drop 0-5% this year," he said.