According to new research from Daft.ie, residential rents for properties close to Ireland's light-rail DART train stations and Luas stops rose by 3% to an average of €1,770 per month in the first three months of 2018.

This means that renters living close to Dublin's light rail network are now paying a premium of €3,360 per year (17%) compared to the average rent for Dublin.

Daft.ie's research team analyzed the average rental prices for one and two bedroom properties close to (controlling for time, size and type) each of the 125 stops & stations in the Greater Dublin Area for the period between April 2017 and March 2018.

Commuters living on the Dublin coastline pay on average the most, with rents close to the Sandymount DART averaging €2,282 per month. Renters close to the Sandymount DART (the most expensive station to live by) pay on average double (€2,282) than those living by the Cheeverstown Luas (€1,056), which has the least expensive rents on these new maps.

Rents near DART stations are among the most expensive analyzed with Pearse (€2,226), Lansdowne Road (€2,175) and Dalkey (€2,205) accounting for four of the top five most expensive stations to live near.

On the Luas, homes close to Spencer Dock on the red line command the highest average rents (€2,260), while those living close to the Charlemont stop (€2,091) pay most on the Luas green line.

Daft.ie also analyzed the average rents for each stop on the Luas cross-city green line, which opened in December. Properties close to the new Dominick stop came out on top, with average monthly rents of €1,894.

Commenting on the figures, Ronan Lyons, economist at Trinity College Dublin said, "The increase seen in the cross-city Luas stations between Q4 2017 and Q1 2018 is similar to the rest of the city for rents, with both rising on average 3% in the same period. Given the service only started operating at the end of 2017, this shows that when estimating the effect of investments like the cross-city Luas, it is important to factor in anticipation effects, that is, sale or rental prices rising ahead of a new amenity opening up in an area. Based on this data, it appears that the rental market on the Luas green line has now adjusted to the new service."

Commenting on the data; Martin Clancy from Daft.ie said: "Commuters living close to Dublin's DART stations are now paying €1,810 on average each month - in contrast, the average rent by a red Luas stop is now €1,652 while it costs €1,797 for those close to the green Luas line."

Most expensive (All Stops & Stations) 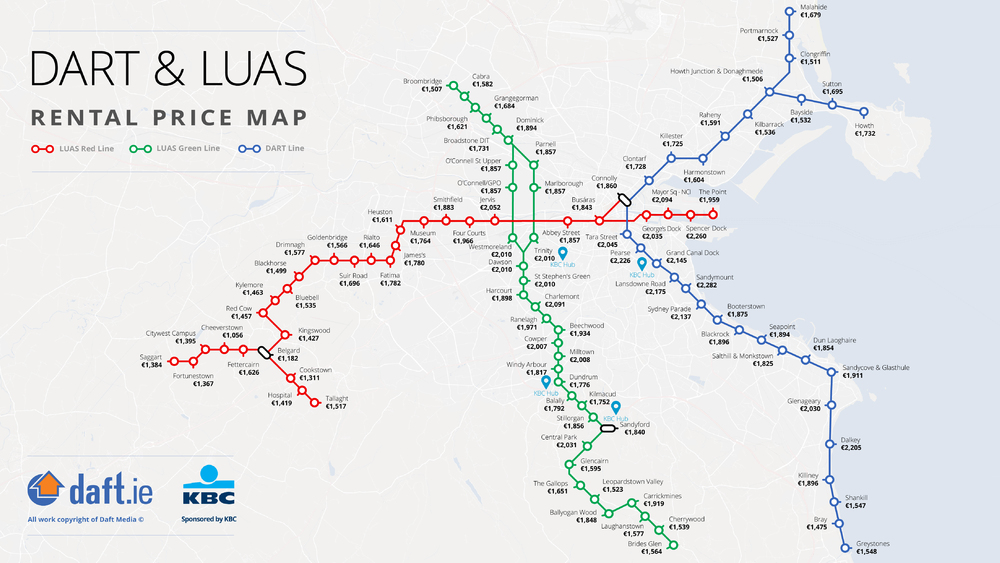