According to CBRE's How Global is the Business of Retail? report, Tokyo is the world's hottest city for new retailer expansion, attracting 63 new retail brands. Space in core areas of Tokyo remain highly sought after despite the mixed signals in the economy and an increase in sales tax of 8% introduced in April 2014.

Singapore follows Tokyo with 58 new retail brands whilst Taipei came in fourth, climbing seven places from last year's new entrants' rankings with 49 new brands this year compared to 29 in 2013. Other cities in the region which makes the top fifteen markets include Hong Kong with 45 new entrants, Beijing with 34 and Manila with 24.

Jonathan Hsu, Head of Occupier Markets Research, CBRE Asia Pacific, said, "The continued desire for expansion into new cities remains high for international brands. We are seeing a great deal of expansion into Asia and in particular into Tokyo, Singapore and Taipei. Tokyo's domestic demand is expected to strengthen by the number of tourists the local government has pledged to attract by 2020, however, overseas brands will continue to expand to exploit the growing consumption in this market. Elsewhere, in Singapore, food and beverage operators were most active whilst Taipei has become a hotspot for Japanese and Korean fashion and cosmetics brands."

Globally, mid-range fashion retailers remained the most active sector, accounting for 21% of international expansion, followed by Luxury and Business retailers with 20%. Expansion into the Asia Pacific region was dominated by Luxury & Business retailers accounting for 24% of activity, followed by Coffee and Restaurant retailers with 22%. Retailers from Asia Pacific still see substantial growth within its own region with a majority 79% of retailers continuing to target their own region for expansion; 41% of American retailers will also focus on the Asia region.

Manish Kashyap, Regional Managing Director, Head of Brokerage Services, CBRE Asia Pacific, said, "Retailer globalization continued in 2014 as retail brands targeted a wide range of locations across the world. Not surprisingly, Asia features heavily on the list of target cities of new retailer entrants with six out of the 15 cities from the region. The luxury and business fashion sector in particular contributed more than a significant portion of the new retail entrants to the region, however, this was mostly second-tier brands as mainstream brands are already well-established.

The core elements of globalization, technology and demographic change are continuing to have a dramatic impact on the retail business, encouraging global retail expansion. As retailers look to drive market share and raise their brand profile, they will continue to expand and look for opportunities beyond their home territories. We are seeing more brands open in diverse locations such as Taipei and Manila. Even though China is seeing a slowdown of demand from retailers to expand, the growth of consumer spending power of this market means it is hard for brands to resist entry for much longer." 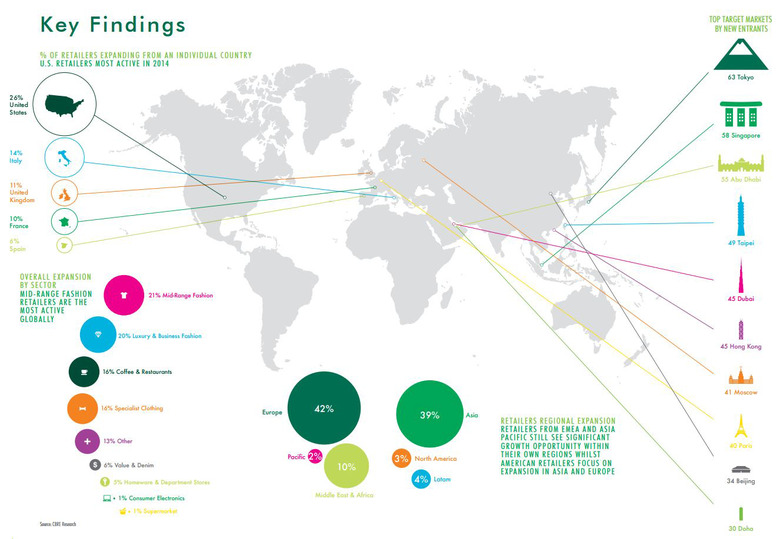