Yet investor sentiment remains strong as acquisitions by J-REITs continue to drive the overall market.

In Osaka, investments for the quarter increased 44% to JPY 101 billion. Several transactions exceeded JPY 10 billion in value, demonstrating investor's interest in areas other than Tokyo. By asset type, there was a decline y-o-y for all sectors except health care. Offices accounted for 56% of the total, followed by 16% for the retail sector, 13% for the hotels, and 11% for residential sector. Although the total value of transactions in the closely-watched health care sector of the J-REIT market was small in scale at just JPY 8 billion, it was a six-fold increase on last year's value as a severe shortage of properties in the investment market has led to intense competition for buildings, but investor sentiment remains strong amidst an abundance of funding and robust market conditions.

The latest quarterly survey for July 2015 found that average expected yields (based on NOI) in major areas of Tokyo declined across all sectors. Yields in the office sector (Otemachi, Tokyo) declined 7bps q-o-q to 3.78%, the second consecutive quarter of a record low since CBRE began its surveys in July 2003. The residential sector also fell to their lowest levels since the survey began for this sector in October 2007: studio apartments were at 4.65% (down 5bps q-o-q), while multi-room apartments declined to 4.75% (down 10bps q-o-q).

Expected yields for retail facilities (Ginza Chuo Dori), hotels (management contract, in Tokyo's 5 main wards), and multi-tenant logistics facilities (Tokyo Bay area), stood at 3.94% (down 4bps q-o-q), 5.25% (down 5bps), and 5.05% (down 10bps), respectively, the lowest since the survey for these sectors began in January 2009.

Expected yields for offices in cities other than Tokyo also declined. Osaka fell by 10bps q-o-q to 5.55%, while Nagoya was down by 7bps to 5.83%. Other cities included Hiroshima at 6.40% and Fukuoka at 5.65%, both of which are down 11bps and 13bps q-o-q respectively. Despite further compression in regional yields, they are still more than 150bps above the Tokyo yield. Given the strong interest by investors towards these regional cities, yields are likely to compress further and the gaps vis-à-vis Tokyo to narrow. 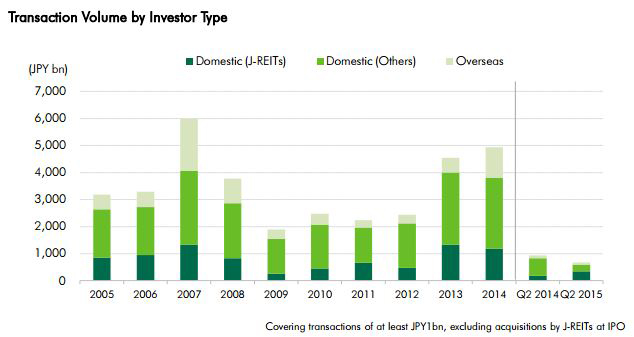