CBRE is now predicting a significant boost in outbound real estate investments by Japanese investors in the coming years, particularly through indirect investments through funds.

Japan's interest in overseas real estate assets is set to rise on the back of the strong US economic recovery, with Japanese investors expected to increasingly diversify their investments both globally and across the Asia Pacific region. CBRE's latest paper, Japan Major Report-Rising Outbound Flows: Japanese Capital in the Global Real Estate Market, provides an overview and examines the outlook for overseas real estate investment by Japanese investors.

Japanese investments into oversees real estate took off in earnest in 2011, as investors sought higher yields and greater geographical and risk diversification. The US has garnered the largest amount of Japanese capital since 2007, receiving $1.3 billion in outbound investments in 2014, mainly directed towards the office sector. CBRE now predicts growing outbound real estate investment, driven by business needs as domestic earnings stagnate due to deflation and low interest rates. Major Japanese players include real estate companies and general trading companies.

While the US remains the destination of choice for Japanese outbound capital, investment into Asia has likewise demonstrated firm growth, particularly into the emerging growth markets of the ASEAN region.

In a survey of Japanese investors carried out by CBRE in January 2015, investor interest in developed countries in Asia as well as in emerging Asia was ranked at 39% and 24% respectively, accounting for 63% of total responses. In terms of development types, the industrial sector attracted 33% of investments, followed by apartments at 21%, and both retail and mixed-use sites at 19%. 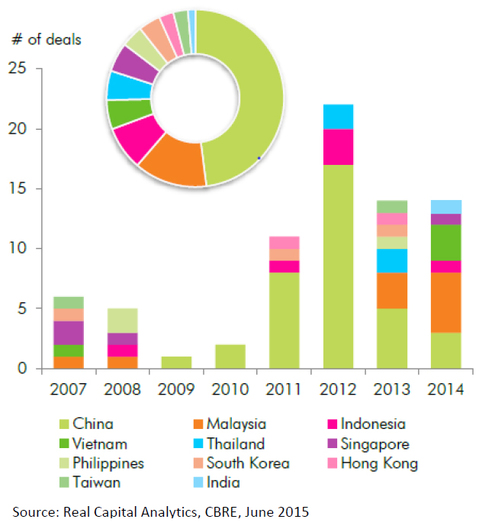 Japanese investment into real estate seemed to have widened outwards when China reached its peak in 2012, having accounted for approximately 60% of total Japanese investment. While China continues to attract healthy Japanese interest in both industrial and mixed-use developments, shares of other Asian countries have steadily risen.

Major Japanese Developments in Asia by Country and Asset Type

Change is also expected within Japan's institutional sector. The Government Pension Investment Fund (GPIF), the world's largest pension fund, is anticipated to allocate up to 5% of its approximately US$1.2 trillion of assets into alternative investments, including real estate. Assuming that it will allocate investments into foreign assets in similar levels as major US pension funds, GPIF's total investments in overseas real estate in the coming years can be estimated to reach US$1.8 billion, or equal to the total Japanese outbound real estate investment for 2014.