The small nation of Montenegro, one of Europe's newest countries, is attracting the attention of both holidaymakers and serious high rollers.  Developers are building golf resorts, marinas and residential and hotel resorts aimed at a sophisticated international audience who are attracted to the natural beauty and easy accessibility of this Balkan country. 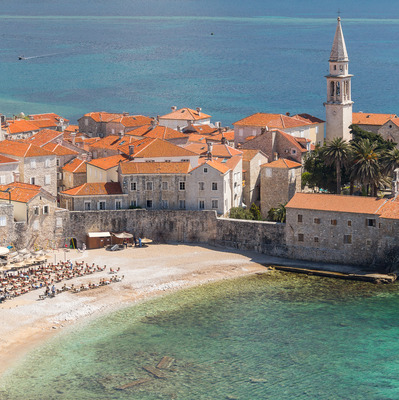 Montenegro, dubbed the Pearl of the Mediterranean, lies south of Croatia and north of Albania.  It is small in size - just 5,333 square miles with a population of 650,000 - but big on beauty with mountains, canyons and stone Venetian architecture. Inland there are five National Parks, ski resorts and the Balkans largest lake and deepest canyon but it is the slim and rocky 183-mile Adriatic coastline and in particular the waters of UNESCO Heritage Site Kotor Bay, that is attracting most international attention.

Back in the 1960s the region was something of a celebrity hangout, popular with stars including Sophia Loren and Elizabeth Taylor but the Balkan Conflict of the 1990s put paid to that. After years of destruction modern Montenegro was created in 2006 from part of the former Yugoslavia and Serbia and today the country, which uses the Euro as its currency, has applied to join NATO and the EU.

Now tourism is back with a bang too. Visitors from across Europe and Russia have helped to make tourism the fastest growing economic sector in the country with revenues increasing by 17 per cent each year. The latest data from the World Travel and Tourism Council placed Montenegro at the top of a list of 184 countries for predicted tourism growth over the coming decade. 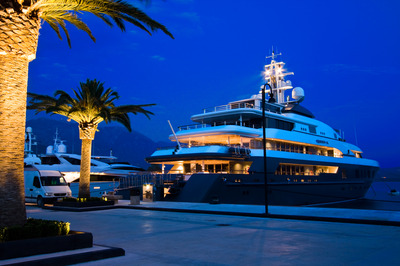 International brands have taken note of this allure and acted on it. Mighty Asian-based hotel company Aman opened their five-star 118-suite resort on the small island of Sveti Stefan in 2009, transforming the former fifteenth century fisherman's homes into an oasis of simplicity and beauty with nightly room charges from €700. This is where world number one tennis player Novak Djokovic held his wedding this summer.

In August 2014 Regent Hotel in Porto Montenegro became the second five-star international brand to open and will be joined in the coming years by One & Only and Four Seasons.

Montenegro has plenty to interest second homeowners and sailors too. Protected and wide Kotor Bay is outstandingly beautiful, with glassy waters surrounded by brooding dark mountains - Montenegro means "Black Mountains" - and the perfect place to mess about in a boat. Meanwhile the country's position in the Mediterranean provides thousands of islands to the north and south to explore as well as Venice, Corfu and Croatia on hand. It also has more appealing taxes than more established European boating countries.

"Montenegro has zero tax on charters compared with 20 per cent VAT in Antibes for example," says Nick Cassini, Sales Director at Porto Montenegro. "On top of that fuel prices are around 50 per cent lower than in Italy. Croatia, Greece and Italy are established sailing destinations and Montenegro is in the middle of all three. It is easy to see why so many yachts are moored here."

The first large-scale development, Porto Montenegro on Kotor Bay is a sparkling example of what can be achieved. Planning on the former military shipyard in Tivat started in 2007 and opened three years later with an impressive modern marina. 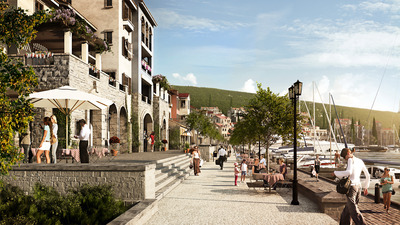 Today Porto Montenegro's marina is hugely popular. It has over 400 berths including space to moor the world's longest yacht, and plans for another 70 super-yacht berths next year. There is a newly opened Regent Hotel, seven residential apartments with over 200 apartments, a tennis club, sports facilities including pools and a gym and a range of smart shops and restaurants.

"So far in 2014 we have completed over €32 million of property sales, mainly to Europeans and Russians," says Cassini. "Prices of the remaining units start from €368,00 for a one-bedroom apartment, €1,353,000 for two-bedrooms with large terraces or €5,000,000 for a penthouse at Regent Hotel. A further phase of apartments will be released next year."

Newer but no less ambitious resorts include Lŭstica Bay, a 1,700-acre estate with five mile water frontage across Kotor Bay where Egyptian developer Orascom is planning to build an entire new town over the next 15 years. Lŭstica Bay will have seven hotels, two marinas, a Gary Player-designed golf course, an international school and year round shops and restaurants. The first waterside apartments are nearing completion while up to 1,500 townhouses, villas and apartments will be added all around the green, hilly site.

"Only 6 per cent of the site will be developed and we will have a protected marine area," says Omar Farid, Project and Development Director of Lŭstica Bay. "Most of Montenegro's coastline is rocky but Lŭstica Bay has sandy beaches. Buildings will be low-level and surrounded by botanical gardens. We aim to create a fully integrated community based around Montenegro's first golf course."

In an attempt to encourage the market, the Montenegro government has abolished all buying costs on new-build property. Resale homes meanwhile incur a three per cent Property tax. Back in pre-recession days early buyers came to snap up the older Venetian-style stone houses built around Kotor Bay and prices escalated rapidly. 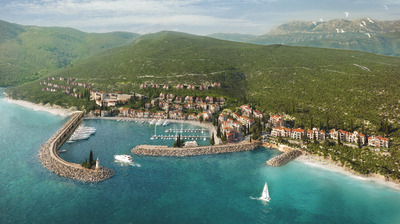 Official figures from the Statistical Office of Montenegro say that property prices fell by 0.7 per cent in the second quarter of 2014 over the previous quarter. The total number of new build apartments and houses sold in the same period rose by 16.6 per cent, evidence of the strength of demand.

"To really delve into the market, it is important to know that there are two distinct breeds: the shiny, spanking new apartments at Porto Montenegro or Lŭstica Bay for instance which sell for over  €5000 per square meter and the traditional perfect stone houses and apartments which dot Kotor Bay," says Kiernan Kelleher, MD of Savills associates Dream Estates Montenegro. The latter were being snapped up by canny buyers for €1500 per square meter in 2006 and today, even after a few bumps along the way, these early pioneers are doubling their money for decent renovated product."

Current examples for sale include a one-bedroom waterside apartment in beautiful Perast on Kotor Bay costs €155,000 while a four-bedroom villa with infinity pool overhanging the sea near Bar costs €1,350,000.

"There is still excellent value to be had on the coast whether you want to dock your big yacht next to your penthouse or get out your paint scraper and renovate a older beauty," says Kelleher. "Both are still priced well below more established destinations and experts forecast continued growth in Montenegro as additional 5 star hotels, the lifeblood of any property market we say, are introduced. Phase One of Montenegro's transformation into a world class, high-end tourism and property destination is complete."