Geographically, the vacancy rate diminished strongly in key Moscow submarkets over the last year, by 6 ppt to 11.4% in the Moscow City and by 4.4 ppt to 8.9% in the Central Business District.

"The vacancy rate in the city centre reached the ten-year minimum, at 7.7% for both Class A and B+ premises there. The Central Business District net absorption was at 75,000 sq. meters in H1 2018, in H1 2017 it was negative," comments Elizaveta Golysheva, Head of Office Agency, JLL, Russia & CIS. "The key deal was Aeroflot in the Arbat 1 business centre. Moreover, vacancy rates in such centres like Legend or Paveletskaya Tower diminished strongly. Considering the high demand and the lack of completions in the Central Business District, the vacancy rate there will continue to decline. Therefore, we expect the CBD to transition into a landlord market in H2 2018."

In Q2 2018, only 2,300 sq. meters were delivered to the market. The single business centre completed, Nikolin Park, a part of a residential complex, was located beyond MKAD on Kaluzhskoe Highway.

"In line with recent construction delays, a part of planned H1 completions was postponed to H2 or later," says Alexander Bazhenov, Office Market Analyst, JLL. "The overall H1 2018 completions were only 39,000 sq. meters, although 86% higher YoY. The delays resulted in the downgrade of overall 2018 expected completions to 217,000 sq. meters."

At the same time, the take-up has grown, reaching 633,00 sq m in H1 2018, up 41% YoY. The most significant increase, 48% YoY, was recorded in Class A, to 220,000 sq. meters. The bulk of leased and purchased space was beyond the Third Transport Ring, 46% versus 35% a year ago. Such dynamics shows the current trend of the Moscow market, when companies prefer to occupy quality buildings outside the Central Business District, which is primarily due to the shortage of large Class A premises in the CBD. 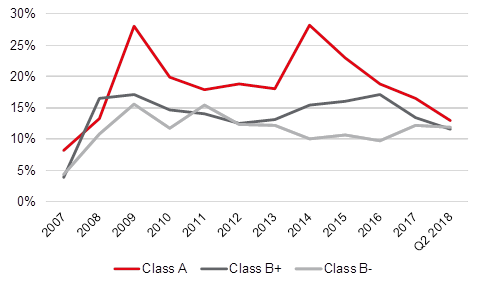 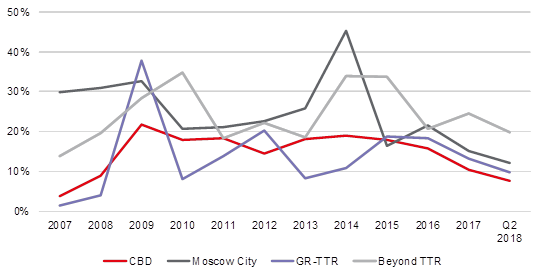 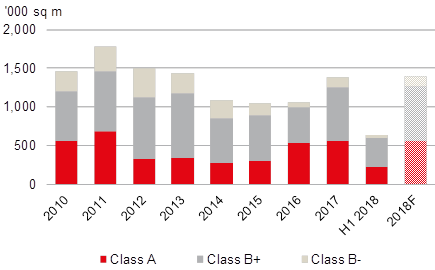