According to international property consultant JLL, with no new shopping centres delivered to the market in Q1 2017, the vacancy rate in existing retail properties in Moscow declined from 7.5% to 7.2%. Over the course of the year, JLL analysts expect this indicator to decline further, to 6.5%, the lowest level since the beginning of 2015. 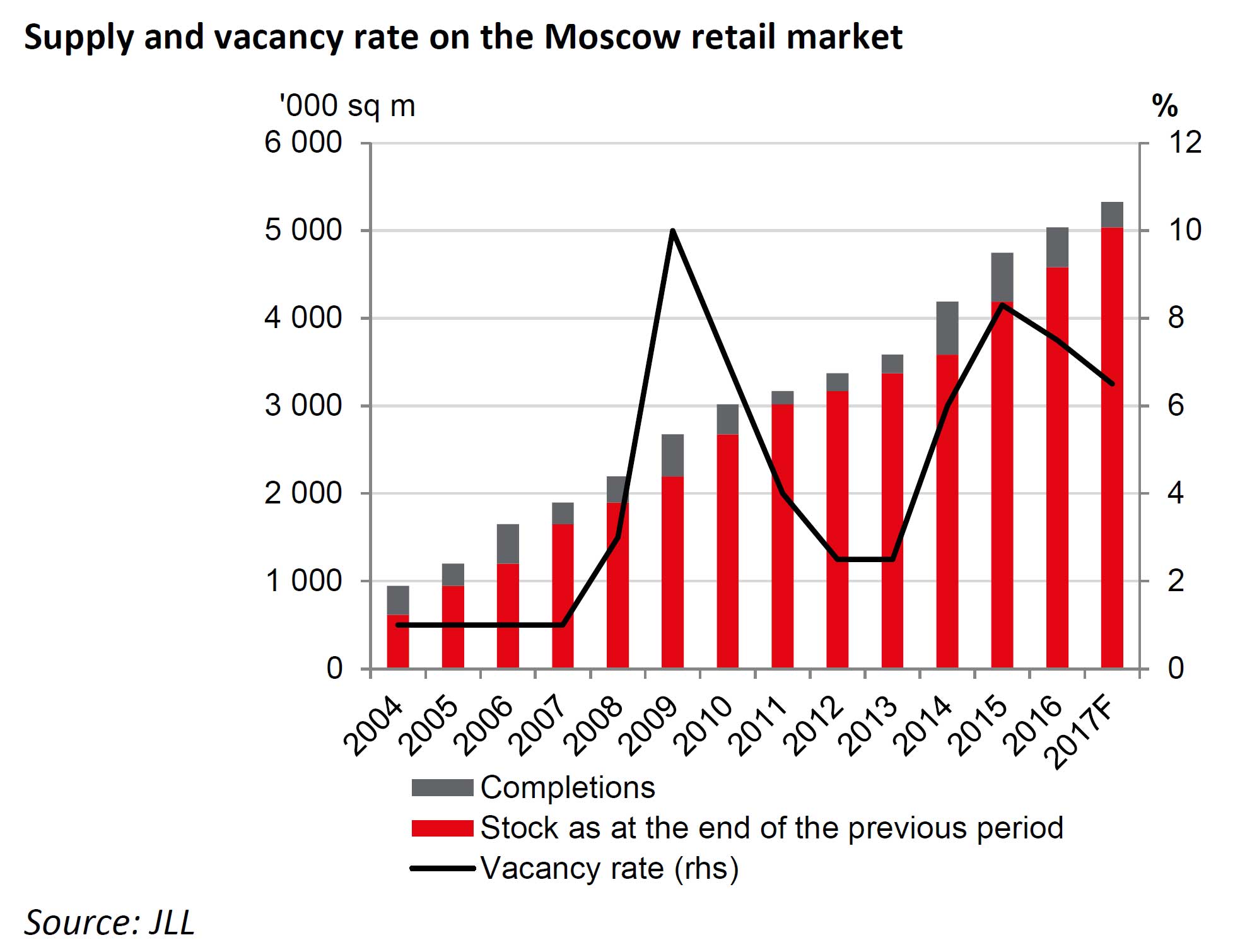 "The volume of new shopping centre supply in Moscow has been declining since 2015. Developer activity moderated considerably during the recession; projects were frozen at various completion stages." Ekaterina Zemskaya, Regional Director, Head of Retail Group, JLL, Russia & CIS, says.  "This year started with an announcement of realization of such previously suspended projects as Salaris (105,000 sq. m) and Galeon (14,000 sq. m), as well as construction plans of brand-new projects, in particular Vegas on Kievskoe highway. As economy stabilises, we expect further recovery of development activity that will restore positive completion dynamics in 2018-2020." 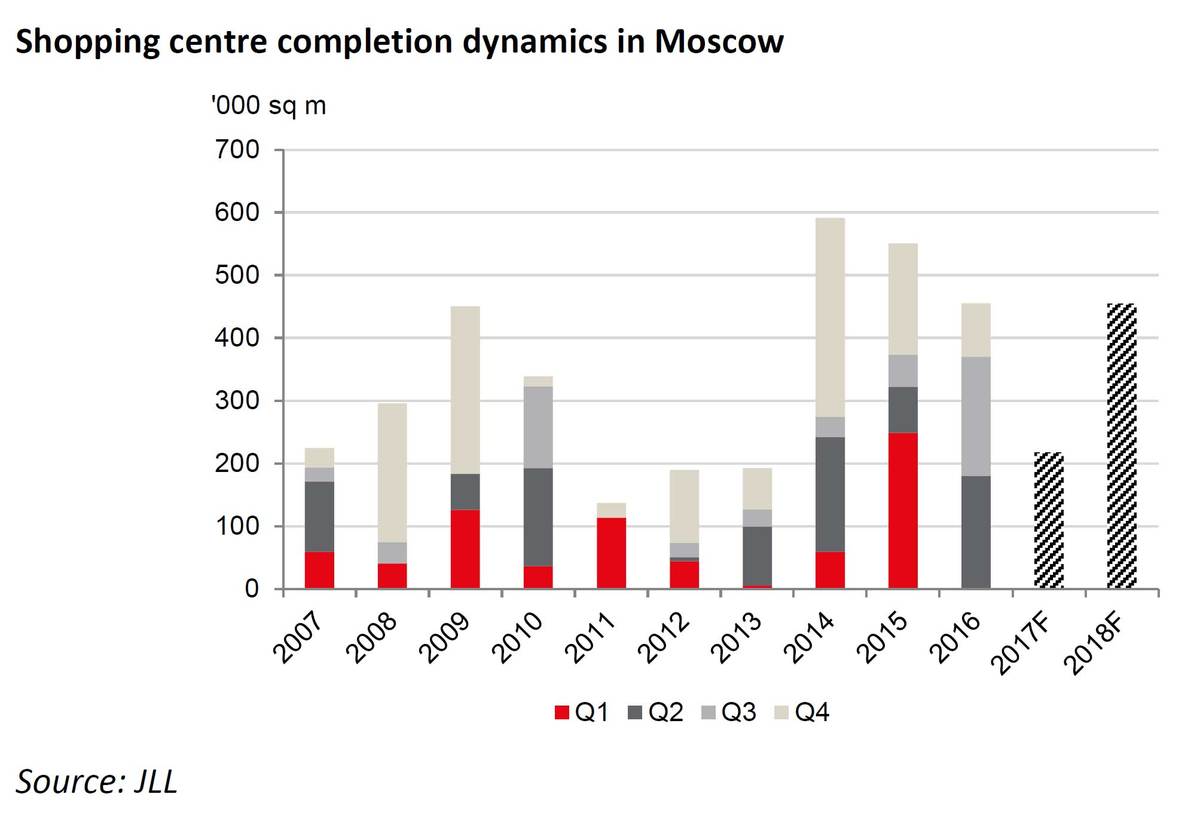 "The focus of developers is changing with a gradual market saturation by traditional shopping centres and rising competition. There is a growing interest in neighbourhood shopping centres, which not only focus on the daily needs of residents, but also offer cultural and leisure components. The share of such projects in the future supply will increase mainly as a result of ADG Group's reconstruction and reconception of 39 Soviet era cinemas (324,000 sq. m)", says Polina Zhilkina, National Director, Head of Retail Advisory, JLL, Russia & CIS. Zhilkina continues, "At the same time, construction of transport interchange hubs incorporates shopping complexes. For instance, Seligerskaya (145,000 sq. m), Cherkizovo (120,000 sq. m), and Park Pobedy TPUs. Such projects will form the bulk of the new retail supply from the beginning of 2019."

The Russian market continues to attract new international retailers: seven new brands appeared in Q1 2017, Aquazzura, Zanellato, Peter Kaiser, Japonica, Giorgio Armani Beauty, Eglo, and Ahimsa. Most of the newcomers represent the premium segment. The most notable event among the first quarter debuts was the first European opening of Italian cosmetics boutique Giorgio Armani Beauty in Atrium. The only brand opening in street retail - on Petrovka Street - was that of Italian luxury shoes store Aquazzura. Street retail traditionally attracts flagship stores of global brands, with Q1 marked by such launches as flagship Nike store (the third overall and the first in Europe new concept store); a Massimo Dutti store appeared on Kuznetsky Most Street; H&M opening on Tverskaya Street was announced for Q2 2017. 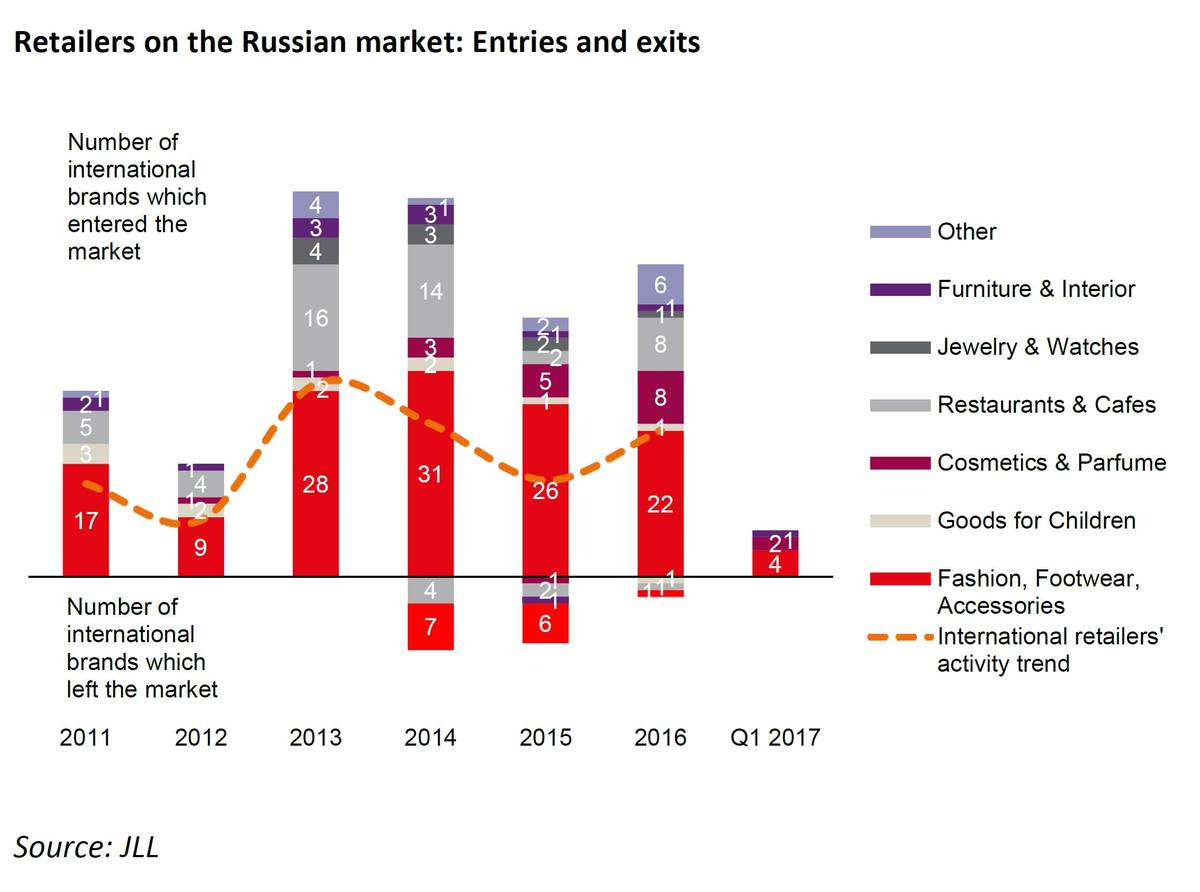 "It is too early to call a start of the consumer sector recovery", says Margarita Shebanova, Retail Market Analyst, JLL, Russia & CIS. Shebanova further said, "Although consumers, along with other market players, adjusted to the current conditions, their incomes continue to decline. Nevertheless, the expected improvement of retail turnover and real disposable income dynamics (by 2.3% in 2017, according to Oxford Economics) will support further improvement in retail leasing activity."
Sponsored by
Related News Stories