According to global property consultant JLL, tightening rate cycles and inflationary concerns led to a slowdown of direct real estate investment activity across the Asia Pacific region, which fell 37% year-on-year to $32.3 billion in Q2.

Among the hardest-hit was China, where investment volumes contracted by 61% year-on-year to $5.8 billion on the back of pandemic lockdowns.

"Investment volumes in the first half declined moderately from the high base set in 2021 as external factors emerged, resulting in investors adjusting capital deployment strategies to align with a more aggressive rate tightening cycle. Encouragingly, dry powder levels remain high and we are seeing that the appetite for real assets remains strong. Clear opportunities exist and we're advising clients to expect a new price discovery phase to remain a dominant theme for the remainder of 2022, as macroeconomic headwinds and ongoing inflationary pressures influence decisions," says Stuart Crow, CEO, Capital Markets, Asia Pacific, JLL.

The Asia Pacific office sector remained the region's most liquid asset class, drawing $30.6 billion in investments in the first half, declining a modest 8% year-on-year from last year's high base. Industrial and logistics investments ($14.6 billion) tapered off by 37% from record volumes in 2021, while deployments into retail assets ($14.0 billion) declined by 31% year-on-year. Investments into alternative assets ($1.4 billion), such as data centres declined modestly, dropping by 12% year-on-year.

The impact of the pandemic-influenced lockdowns weighed on China in the first half with investment volumes of $14.1 billion representing a year-on-year contraction of 39%. Japan volumes ($11.5 billion) decreased by 33% in the first half due to a lack of logistics transactions. Activity in Australia declined by 27% year-on-year to end the half at $9.8 billion.

South Korea ($15.3 billion) emerged as the region's largest market by volume in the first half, remaining flat year-on-year, buoyed by office transactions including SK U-Tower and A+ Asset Tower in Seoul. Gains were registered in Singapore ($9.3 billion), with 81% year-on-year growth supported by large ticket office and mixed-use transactions including Income@Raffles and in Hong Kong ($5.0 billion), up 18% driven by a number of en-bloc industrial sales.

"The market adjusted to new realities over the first half, which was reflected in more muted investment activity. Capital remains committed to the Asia Pacific real estate market but deployments will be more selective as investors play the long game and price in financial market tightening to any investments for the foreseeable future," says Pamela Ambler, Head of Investor Intelligence & Strategy, Capital Markets, Asia Pacific, JLL. 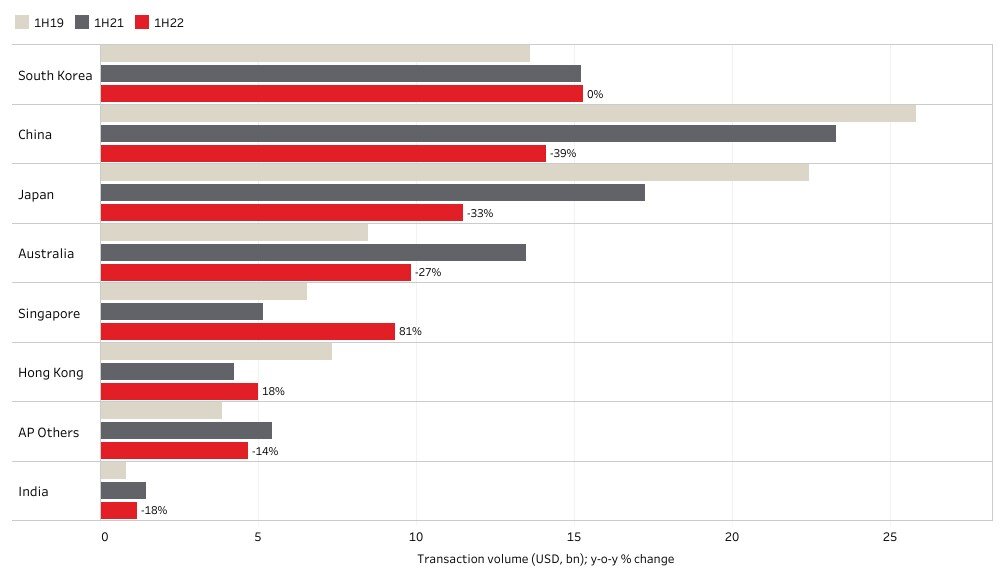