According to Knight Frank, active investors see Spain as the top investment target in Europe, with Germany following close behind in 2015.

Knight Frank's recent European poll showed 27% of over 150 investors identified Spain as their preferred investment target for next year, clearly indicating the strength of its recent recovery with values still well below their previous peak.

Humphrey White, Head of Capital Markets at Knight Frank Spain, comments "The fundamental rationale behind investing in Spain is even stronger than this time last year. Prime CBD office rents have risen by 20% over the past 12 months, but remain nearly 40% below the 2008 peak, and both footfall and sales have been increasing in dominant shopping centres for six consecutive quarters."

Over a quarter (25.4%) of attendees chose Germany as their preferred target.  Results mirror the buoyant investment activity seen in the country, with a total of â¬30 billion invested in property during H1 2015, an increase of 35% compared to H1 2014.

Joachim von Radecke, Head of German Desk at Knight Frank in London, comments "The increase is driven by the rising flow of foreign capital into the country and the 50% increase of domestic investor activity.  Foreign investors' share of the German market continues to grow, and now accounts for almost 60% of all transactions in H1 2015.

"We saw the usual trend towards the "big five" markets - Berlin, Frankfurt, Munich, Hamburg and DÃ¼sseldorf, with 78% of total office transactions recorded in these cities."

The UK again featured strongly in this year's poll, attracting 17.4% of the votes, on the back of the continuing recovery which has now extended to the UK regions.

Chris Bell, Managing Director of Europe at Knight Frank, comments, "The UK is well ahead of the rest of Europe in terms of the property cycle and has already seen significant yield compression.  However, it is encouraging that rental growth is beginning to re-emerge more widely across Europe, helped by the strengthening of occupier demand and the steadily falling availability of good quality space exacerbated by the lack of development over the preceding recessionary years." 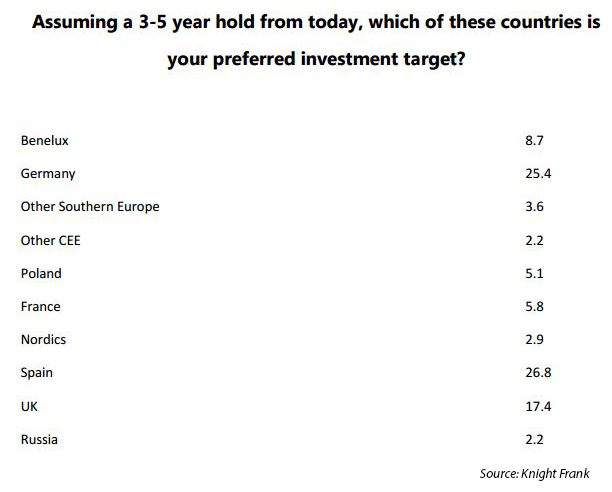