According to Cluttons, the ongoing diversification and growth of Sharjah's economy, as well as a limited supply pipeline of Grade A office space, is set to positively impact on rents in the emirate's commercial property market. 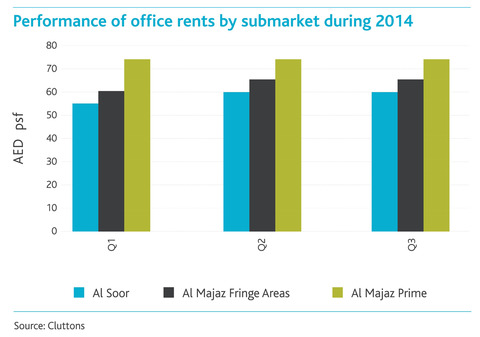 The report also highlights that this trend is expected to drive Grade A space take up, against a backdrop of low levels of Grade A stock. In the short term, while supply levels play catch up to an extent, office rents at the top end of the market are expected to come under increased upwards pressure. This will leave incumbent occupiers with little choice, but to absorb the higher costs, or seek alternative options.

According to Cluttons' Chief Executive of the Middle East Steve Morgan, "The shortage of Grade A space and capital expenditure associated with any potential move, will mean that larger occupiers will be either unwilling, or unable to relocate and are likely to absorb any rent hikes. We anticipate that smaller occupiers will be more flexible due to their cost conscious behavior."

The report shows that, during Q3 2014, rents across Sharjah's main office markets held steady, with the prime areas of Al Majaz retaining their position as the city's most expensive area for office space, with rents remaining stable at AED 75 psf. These flat rents are attributed to the sudden drop in rental rates across some Grade A buildings in the area.

Morgan continued, "This drop in rental rates has been recorded in schemes where landlords, who were previously reluctant to lower rents, are now being forced to reassess their options due to prolonged void periods. This behavior has started to undermine rents in the prime areas of Al Majaz, which is being further exacerbated by landlords attempting to undercut one another in an attempt to drive take up."

Elsewhere in the commercial sector, with both economic activity and the population continuing to expand, there has been an upturn in warehouse requirements from companies expanding operations in Sharjah, as well as those new to the emirate.

According to Cluttons, the rezoning of peripheral areas of several of Sharjah's Industrial Areas to "commercial use" has meant that there has been a steady flow of warehouse occupiers looking for alternative premises. The rezoning of these external parts of the Industrial Areas has translated into heightened interest for space in more internal areas, which have subsequently seen rents driven up.

Cluttons' international research and business development manager, Faisal Durrani commented, "Although there has been no official enforcement of the change of land use in the wider Industrial Areas yet, we have already begun to see a knock on impact on the limited number of vacant land plots in more central areas, with prices continuing to rise.

Durrani added, "Land prices in the Sharjah Industrial Areas currently stand at between AED 200 psf and AED 300 psf, depending on the size of the plot and the proximity to main roads. With the availability of larger plots dwindling, it is inevitable that values will continue to creep upwards, which is likely to catalyst the development of more peripheral and emerging industrial estates."

The report also points out that, with Sharjah Municipality's rent rules also extending to cover the commercial sector, industrial occupiers who have been in situ for a period of three years are being subjected to substantial uplifts at renewal, which is driving relocation to these more affordable areas.