According Knight Frank's latest European Quarterly Report, the European commercial property investment market enjoyed a strong start to 2015, with a total of €50.1 billion transacted during Q1, 2015.

Investment volumes in Q1 2015 were 44% higher than in Q1 2014, making it the strongest first quarter since 2007. Prospects for the rest of 2015 have been boosted by recent improvements in the European economic outlook and total investment volumes are set to exceed €200 billion for the first time since the 2007 market peak. 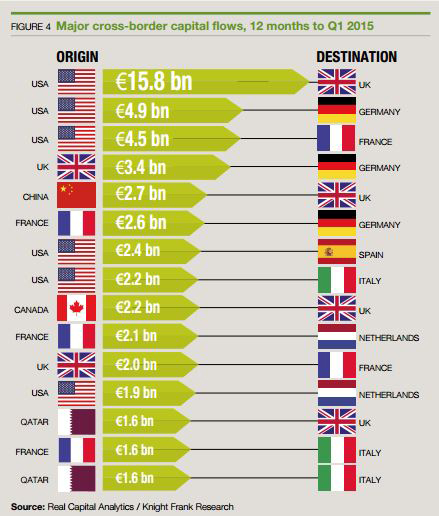 Reflecting investors' increased appetite for risk, investment volumes have continued to rise in a variety of secondary cities and peripheral markets. Following the remarkable revival of the Spanish and Irish investment markets throughout 2014, activity has picked up strongly in Italy and Portugal over the last two quarters.

Prime yields remain under downward pressure in many markets, and cities such as London, Paris, Munich and Dublin all witnessed yield compression in Q1. As a result, The Knight Frank European Weighted Average Prime Office Yield decreased by 16 basis points during Q1 to 5.05%; this was the largest quarterly movement since Q2 2010.

Matthew Colbourne, associate, international research said, "Following its very healthy performance in Q1, the European investment market is on course for another strong year. We anticipate that annual transaction volumes will reach around €220 billion in 2015, thus setting a new post-recession record. Indeed, several countries may see volumes surpass the levels seen at the market peak. The growth in investment will be supported by the improving European economic outlook and cross-border activity may be stimulated by the weakness of the Euro, which has increased the attractiveness of European property prices to many overseas buyers."