According to international real estate consultant Knight Frank, buyers from Hong Kong have purchased £2.2 billion ($2.86b USD) of office buildings in the City of London over the first half of the year. Significantly above the £458 million ($596m USD) recorded over the same time period last year. This steep rise is somewhat unsurprising given the completion of The Leadenhall Building transaction (£1.15 billion / $1.5b USD) in Q1 2017 but still reflects a significant appetite for London real estate.

But while the Hong Kong investors grab the headlines they are certainly not alone.  The deal volumes of the first half of the year reflect a number of interesting themes:


Nick Braybrook, Head of City Capital Markets at Knight Frank says, "A deep pool of buyers continue to chase City of London offices. Looking forward, we expect that Far Eastern investors, in particular Hong Kong buyers, will continue to buy strongly in the second half of 2017 and we predict that the total annual spend by Hong Kong domiciled investors will reach £4 billion - nearly four times the volumes transacted by this buyer group last year.

"Importantly, this increase in activity is being facilitated by a rise in the supply of available opportunities to purchase over the last few months.  Sellers have been attracted to the market by the continued strong demand from both domestic and overseas buyers with availability up 20 per cent in Q2 compared to last quarter and up a third on this time last year.  However, with the strong demand we expect from Hong Kong and other global and domestic investors, the supply numbers could fall rapidly over the next few months as deals are completed.  This is likely to put further downward pressure on prime yields for City of London offices; currently trading at 4.25 per cent."

Anthony Duggan, Head of Capital Markets Research, Knight Frank, said: "London is certainly not alone in attracting money from this part of the world with investors targeting assets in major cities across the globe. Indeed, Chinese and Hong Kong capital was responsible for 13 per cent of all global cross-border real estate investment last year, second only to the United States. As we explore in our new Active Capital report, while there is some uncertainty surrounding capital flows from China as part of on-going capital controls, we expect Chinese and Hong Kong investors to remain active.

"Despite the capital controls in place, limiting some outbound investment from China, it is clear that deals deemed appropriate i.e. in line with existing areas of business and business plans, will continue from both conglomerates, private investors and SOEs, with the recent CIC purchase of Logicor being a high profile example, and in addition many investors will continue to raise funds and invest through their overseas, e.g. Hong Kong or Singapore, entities." 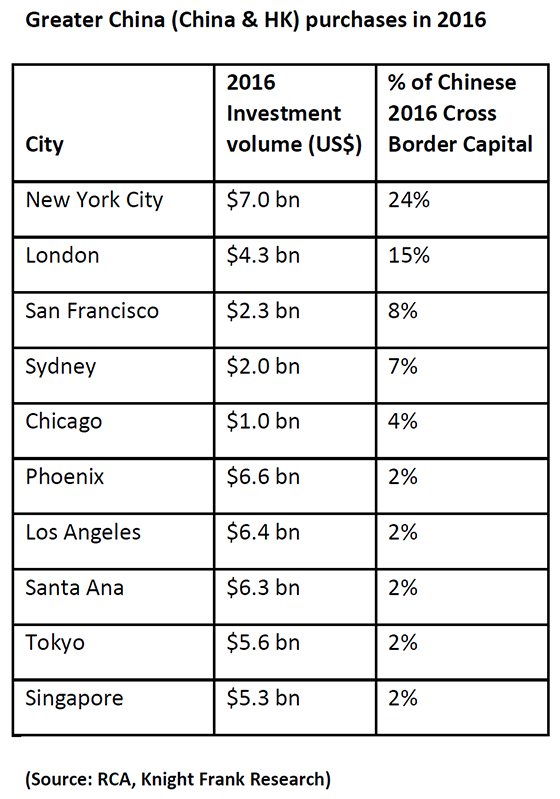