No cycle lasts forever, and a choppy July in the global financial markets reminds us that historically UK real estate has usually gone into a downturn due to an external shock in the macro-economic environment, says global real estate advisor Knight Frank.

In 1990 it was Iraq invading Kuwait, causing an oil price spike, which in turn hit growth and burst a house price bubble. In 2007, it was credit markets drying up which again caused house prices to crash. In both cases commercial real estate was dragged under by the wider economic turmoil. 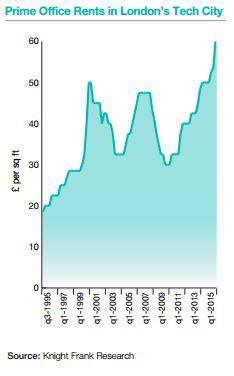 Fortunately, Knight Frank reports, the causes of the rollercoaster financial markets in July - Greece, the China stock market crashes, and a tumble for tech stocks - does not look set to destabilize the global economy, at least this time around. The Euro group remains determined to hold the currency zone together. China's equity markets probably have not yet attracted enough international money to create a systemic threat beyond its shores. The Economist journal argues that the US tech share values are more justifiable this time around than in 2001, when so few were making profits.

However, the start of the next cyclical downturn will probably resemble this July; i.e. a panic begins in the financial markets which sends aftershocks through the global economy, until eventually it reaches UK commercial property. Even if this is not the occasion that the cycle ends, there remains the question of whether that turning point is going to be sooner rather than later?

The darkest hour for the UK commercial property market during the downturn came in mid-2009, as the IPD capital growth index hit its lowest point in July of that year. While some sub-markets have only meaningfully shown signs of recovery in the last two years, it is tempting to view 2009 as the start of the present cycle. The IPD capital growth index has risen 37% since July 2009, demonstrating growth over several years, albeit with a weak patch in 2011-2012.

Certainly for the UK economy and real estate market the word 'recovery' is no longer appropriate, as the situation has moved well beyond the recovery stage. GDP expanded by a heady 3.0% last year, and the 2.5% consensus forecast for 2015 if achieved would still be impressive, even if it is less than 2014. For commercial real estate, total returns stand at 16.7% on an annual basis according to IPD, and we are seeing signs in the office market of rental growth spreading from London to the regions. 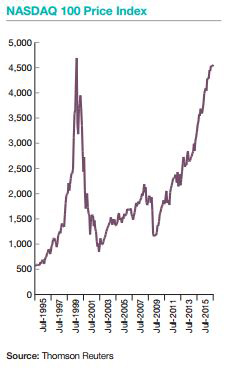 Knight Frank's chief economist James Roberts says, "No market cycle lasts forever, and a choppy July in the global financial markets reminds us that historically UK real estate has usually gone into a downturn due to an external shock in the macro-economic environment."

In January, IPD capital growth (month-on-month) hit a low point of 0.4%, but this accelerated to 0.8% in May and 0.9% in June. So rather than showing any sign of losing momentum, the market could be viewed as mid-cycle and with potential to improve further. This could be driven by the growing volume of money that is targeting the UK regions this year, and a robust performance for the economy.

However, as stated above eventually a turning point will come, and past historic experience is that the downturn starts beyond property. What could bring this turning point about?

The candidate we view as most likely to cause the next downturn is ironically a rising star in the global economy - the tech sector. Even if The Economist is correct in predicting now is not the time we see a tech driven stock market crash, we cannot rule one out at some later date. The railway share booms and busts in the Victorian era demonstrate that it is difficult (if not impossible) to accurately value future growth potential, particularly when so much speculative money is clouding the picture.

The unfolding tech revolution has had a considerable impact on UK commercial property, boosting occupier demand for offices in districts favored by tech firms (like London's Shoreditch). Sheds are popular with investors eager to get exposure to the rise of online shopping. A future crash for the tech sector will have far reaching implications for property, and in our view this should sit high on the list of potential future threats.