First time in 4 years on an annualized basis

International property consultant Knight Frank is reporting prices in prime central London grew by 0.3% in the year to May 2021.

While it wasn't a large increase, it was the first rise in five years and underlines how the recovery of the property market in PCL is not reliant on the re-opening of international travel.

Knight Frank says the last time prices increased on an annual basis was in May 2016, the month before the EU referendum. Subsequent political uncertainty, combined with a growing number of taxes on high-value property, meant average prices fell 17% in the intervening period.

A period of house price inflation in PCL has therefore been overdue and was on the horizon when the pandemic struck.

"The relaxation of international travel rules will provide a boost for the prime central London property market but prices are on the up anyway," said Tom Bill, head of UK residential research at Knight Frank. "Things are picking up where they left off after the general election in December 2019 and buyers can recognize good value after five or six years of falling prices."

The relaxing of international travel rules will, however, provide a more noticeable boost in locations such as Mayfair and Knightsbridge.

Low numbers of overseas buyers have come to the UK in recent months but the ending of quarantine rules will lift demand. Although travellers may still need to quarantine when they return home, any relaxation of the rules means visiting London will become more tenable.

The other impact of rising prices will be a further erosion of the discount for buyers denominated in overseas currencies.

The effect will be exaggerated as the pound gets stronger, which in part has been driven by the country's vaccine-fuelled economic recovery.

The effective discount based on price and currency movements in PCL compared to the period before the EU referendum for a buyer denominated in US dollars was 19.2% at the end of May. That compares to 24.3% in December last year.

Meanwhile, annual price growth in prime outer London increased to 3.1% in May, which was the strongest rate of growth since before the EU referendum in March 2016.

Growing demand for space and greenery after three national lockdowns has led to annual price growth in excess of 6% in markets like Richmond, Dulwich, Wandsworth and Belsize Park. Wimbledon experienced price growth of 9.4% in the year to May, which was the strongest of all London markets, concludes Knight Frank. 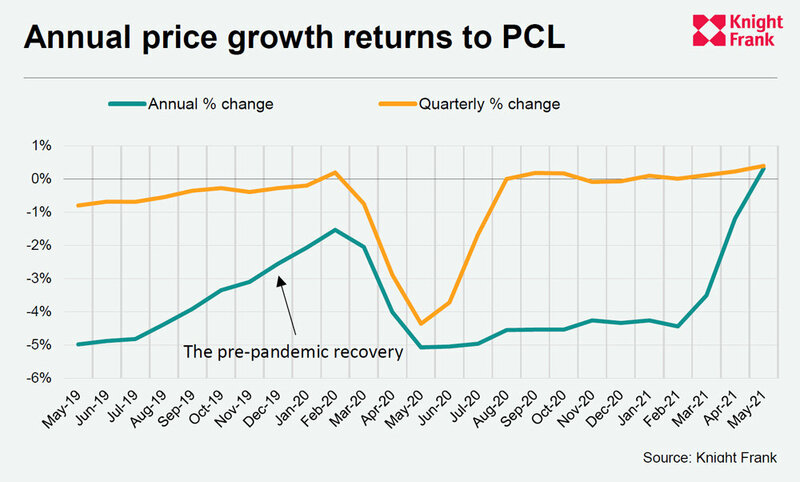