According to international property consultant Knight Frank, prices in the prime central and outer London property markets continued to recover from the impact of the pandemic at their own respective pace in the first two months of this year.

There was quarter-on-quarter growth for the seventh consecutive month in prime outer London in February, demonstrating how demand for more space has driven suburban property markets in the capital.

Average prices in Belsize Park, Dulwich and Wimbledon have all grown by 4% since April last year.

In 2021 through February, there were 1.1% more transactions than over the previous 12-month period, which underlines the strength of activity given the UK property market was closed for eight weeks last year.

While there has been a steady pick-up in prime outer London, prime central London is in more of a holding pattern, with prices flat in the three months to February.

The annual price decline was 4.4% in February, a figure that has been relatively consistent for the last six months. Most of this decline was recorded in the early months of the pandemic and average prices have only fallen by only 0.1% since the market re-opened last May.

The explanation for this differing rate of recovery is the lack of international travel, an effect that is clearly visible on the chart below.

With passenger numbers through Heathrow down by 80% to 90%, activity in the prime central London property market has been disproportionately impacted.

The number of transactions in PCL in the year to February 2021 was 20% down on the previous 12- month period.

"The prime central London property market has been in a holding pattern since travel restrictions were tightened," said Tom Bill, head of UK residential research at Knight Frank. "A gap is opening up between price growth in central and outer areas of the capital but that will close as international buyers can get back on airplanes."

For overseas buyers, there is a disparity between the desire to transact and the ability to view, an analysis of demand in the £10 million-plus price bracket. 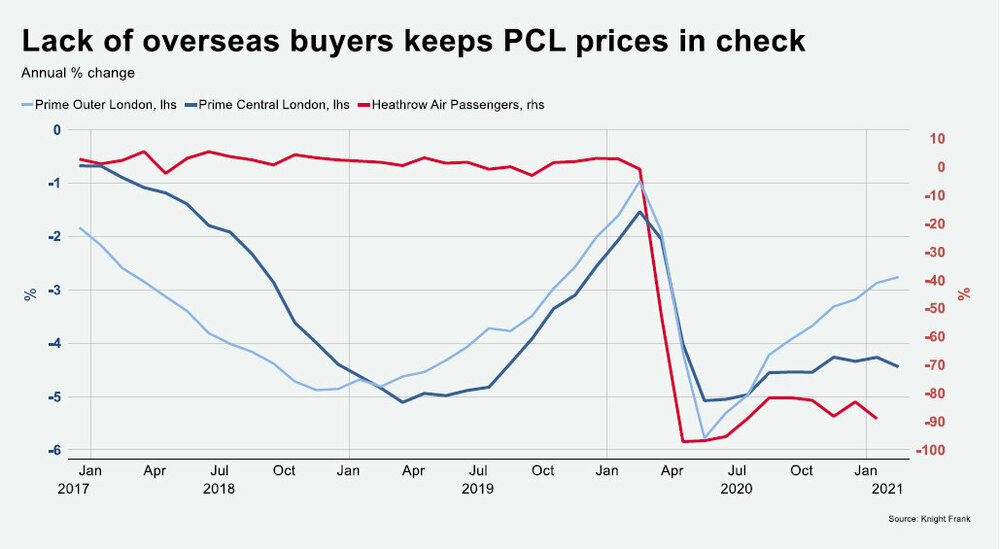