International property consultant Knight Frank is reporting March 2021 was one of the most active months in the UK property market for ten years and prime areas of London were no exception.

The combination of a stamp duty holiday, positive economic data and the vaccine roll-out meant transaction numbers across the country reached their highest point in a decade, says Knight Frank.

The stamp duty holiday, initially due to end in March but deferred by six months with a taper, would have been less of a motivating factor in prime markets in the capital.

However, a wider return to normality driven by the vaccination program produced high levels of activity in March and will continue to do so in Q2. The introduction of a 2% stamp duty surcharge for overseas buyers from April will also have driven activity in PCL last month, although travel restrictions mean many overseas buyers have been prevented from travelling to the UK.

Last month, the number of transactions in prime central London was the highest it has been since March 2016, combined LonRes and Knight Frank data shows. There was a spike in activity in March 2016 ahead of a 3% stamp duty surcharge that was introduced the following month.

Removing that anomaly, the last time sales volumes were as high in PCL was July 2014, six months before a stamp duty increase in December that had a dampening impact on higher-value transactions for several years.

"The UK property market sprang into life in March as the country began to unlock and the Covid-19 vaccine reached more people," said Tom Bill, head of UK residential research at Knight Frank. "Prime London markets benefited from this same effect but the full force of the demand that has built up over the last year will only be felt once international travel restrictions are relaxed."

In prime outer London, transaction numbers also climbed to their highest level since March 2016. The previous high-point was September 2015. Strong activity levels in POL, where there is a higher proportion of domestic buyers, demonstrate how the 2% overseas surcharge was only one of several factors driving activity in PCL.

Average prices fell by 3.5% in prime central London in March, which was the smallest decline since the onset of the pandemic 12 months ago. Prices continue to fall by more than in prime outer London due to the disproportionate impact of international travel restrictions.

In prime outer London, average prices fell by 1.4%, which was the smallest decline since last February, before the first UK national lockdown. The first two months of 2020 were marked by strong demand in the wake of the general election result in December 2019.

Underlining the impact of how demand has increasingly focused on greener suburban locations, the last time price declines were smaller in prime outer London before last February was in November 2016. 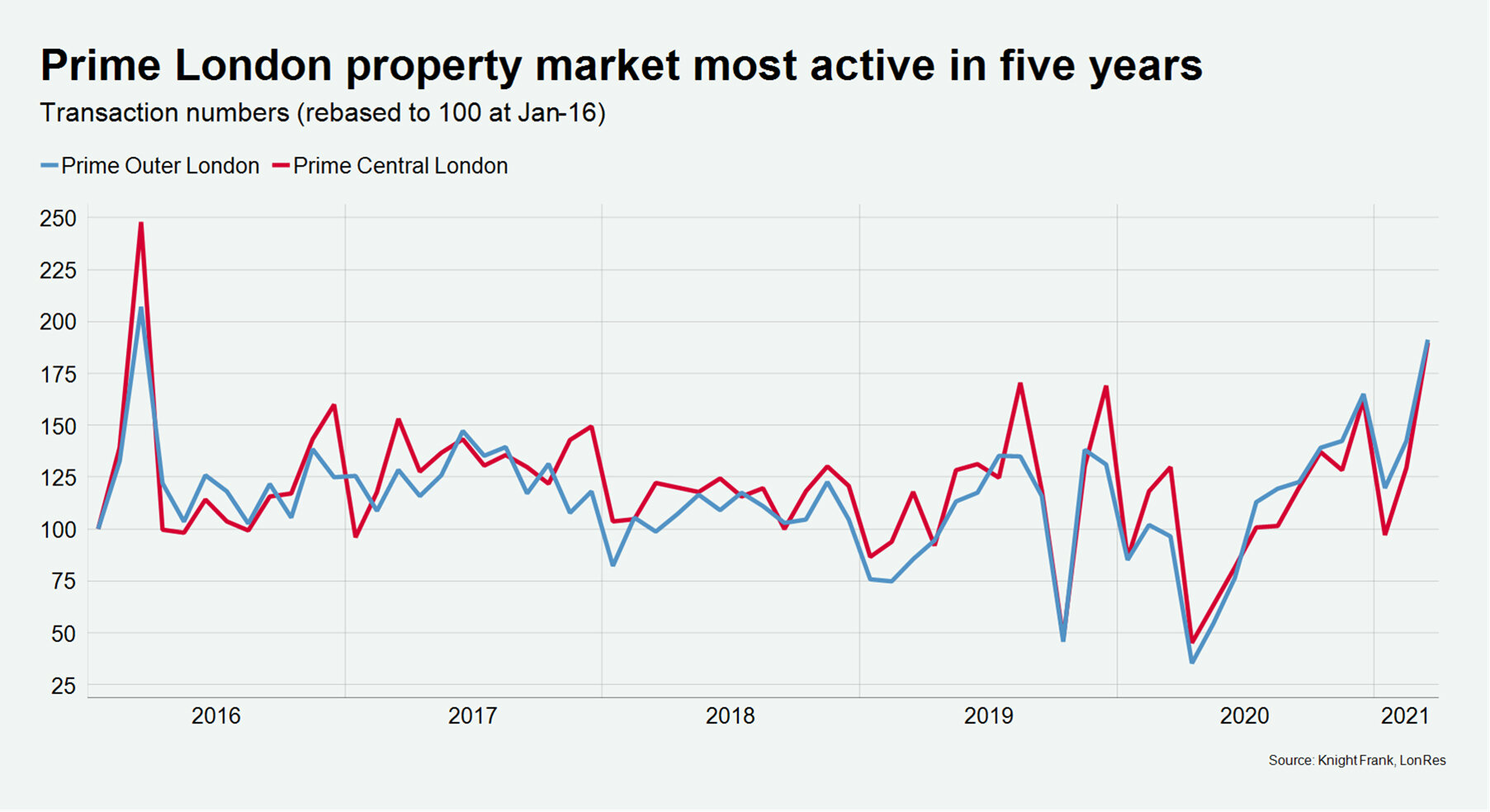