International property consultant Knight Frank is reporting this week that the number of transactions in prime London property markets in March 2021 was among the highest in a decade.

The distortive effects of stamp duty meant there was a decline of 45% in April compared to March, LonRes data shows, but activity will remain strong during the rest of Q2.

Sales volumes fell due to the introduction of a 2% stamp duty surcharge for overseas buyers in April, which was combined with the effect of the original stamp duty holiday expiring on 31 March and the end of the tax year.

However, using the number of offers accepted as a guide to future levels of activity, May and June are likely to experience numbers of exchanges that are comparable with March 2021.

The number of offers accepted in prime central and prime outer London reached its highest level in a decade in April 2021.

"The dip in sales in April is temporary", said Tom Bill, head of UK residential research at Knight Frank. "March was a particularly strong month for exchanges in prime London markets but based on the current pipeline of activity, it wouldn't be a surprise if May or June recorded comparably high numbers."

Demand could be driven higher if international travel restrictions are relaxed, as planned for later this month. There are not meaningful numbers of international buyers in London at present but they may be more willing to travel after the hospitality, retail and leisure industries fully open on 17 May.

The Bank of England estimates that UK consumers have saved £203 billion in cash over the course of the pandemic, which will help drive the country's economic recovery.

Pent-up international capital has built in a similar way and will underpin demand in London as travel rules are relaxed. We forecast this effect will contribute to an average rise in prices of 2% by the end of the year. However, the number of overseas buyers may still be limited by any quarantine rules that apply if they wish to return to their home country.

Meanwhile, prices in prime outer London grew on an annual basis in April for the first time since September 2016. In April 2020, prices fell 2.3% in a month due to the impact of the first national lockdown. Demand for suburban and rural locations remains strong due to the impact of three national lockdowns, as we explore in more detail here. In prime central London, prices fell by 1.2% in the year to April, which was the smallest decline since April 2018.

There is currently a shortage of supply in the UK housing market, which is putting upwards pressure on prices, as we analyzed in more detail here. It is less acute in London, but the shortage is more notable in higher-value markets, where there is a larger proportion of houses with outdoor space. Average prices for houses rose by 0.5% in the year to April, while flat prices declined by 1.9%. It was the first time that average house prices in prime central London have risen in three years.

Meanwhile, there was a 0.1% decline for properties valued at more than £10 million, which was smaller than the 1.1% fall registered in the £1 million to £2 million price bracket. 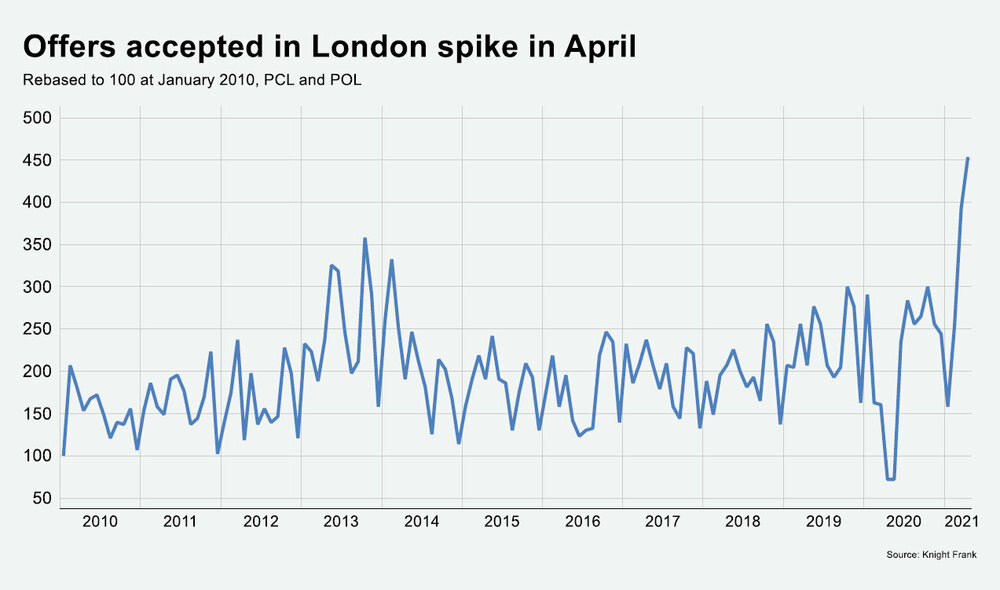