United Kingdom's national estate agency Jackson-Stops recently analyzed Rightmove data and conducted a national poll of active home movers across the UK to reveal that interest rates are driving an increase of homes for sale across the market.

Following the Bank of England's decision to raise interest rates to 2.25% last week, the latest analysis from Jackson-Stops' survey has found that nearly two thirds [61%] of current UK property sellers have cited rising interest rates as a top motivator for deciding to put their home on the market now. As a result, half [48%] of active home movers believe that they would achieve the best possible sale price for their home by selling this year instead of next.

The survey, which polled 500 active home movers who either had their home on the market right now, had sold in the past three months, or were planning to move within the next three months, has underscored just how significant interest rates are in the decision to choose to sell. Over three-quarters [76%] of respondents said borrowing rates were either crucial or important to their move, either reducing their budget for their onward purchase or stopping their move altogether.

Interest rates now sit at a 14-year high in an attempt to combat rising inflation amid the cost-of-living crisis. The latest rise means interest rates have increased by 200 basis points so far this year, from a starting rate of 0.25%. This is driving homeowners to sell now rather than wait until 2023, boosting housing stock across the country and in turn, helping to balance the scales of supply and demand.

Rightmove data from over the summer indicates that the number of homes for sale on its website is 9.6% more than the month previous. Whilst arguably this forms part of seasonal market cycles as we head into the Autumn, the latest Rightmove House Price Index confirms that listings are up 16%  year-on-year.

Nick Leeming, Chairman of Jackson-Stops, comments, "Our latest survey shows that interest rates are a driving force in the housing market. This is causing many to act now, with sellers taking advantage of both the increased buyer pool as many race to lock in more favorable mortgage rates, as well as the current period of sustained positive house price growth ahead of a more stable market next year. This sentiment is reflected in our own stock levels for August across the country, with a 9% uptick in houses on the market across all regions. Clearly both buyers and sellers are looking to transact now in a more balanced market."

He continues, "Our survey results show that 35-44 year olds are driving this uptick in listings, in a likely move to secure a larger family home with a fixed-rate deal ahead of further predicted rate rises. This in turn is helping replenish stock to more normal levels, which should help fluidity across all levels of the market in their bid to find a suitable onward purchase - one of lockdown's lasting legacies that made many hesitant to list their home altogether. After a sustained period of short supply and record high demand since the pandemic, more choice for movers is reassuring."

"Home movers should also be buoyed by the additional saving on Stamp Duty announced in the Chancellors Budget last week. This shift in monetary policy adds a renewed enthusiasm to current transactions, especially those caught in chains, whilst lenders cope with a backlog of applications. The long-term effects of interest rate rises on the wider economy might be delayed, however, with around 75% of current mortgages on a fixed rate of between two and five years."

Mortgage brokers have been keen to add context to the rate rise last week, noting a return to normal for borrowing levels and with that, an opportunity for buyers and sellers to transact in a more balanced market.

Chris Sykes, Technical Director of mortgage broker Private Finance, says: "The latest interest rate rise will drive some people to push forward any plans to purchase or remortgage, looking to secure a fixed rate deal to insulate against further rate rises. However, we have become too accustomed to the cheap cost of borrowing for too long, where if you were to look at average rates over the last 40 years, we are now at the new normal once again. It doesn't look like these rates are going to be lower at any point in the near future, so why wait to move?"

He continues, "A reduction in mortgage products available is typical during times of economic uncertainty, mostly to improve current lender service levels but also as lenders assess their split and risk of business. Regardless of lenders pulling products, buyers do not need to worry as many mortgage deals are still available and any withdrawals are likely to only be temporary. Lenders have fed back to us that they still have plenty of money to lend and we are even seeing some innovations in criteria to attract more business too."

Survey respondents in the West Midlands [55%] were the most motivated by rising interest rates when choosing to list their homes on the market, whilst sellers in the South East were least concerned, with over a third of respondents [36%] motivated by other factors beyond financial pressures. Interestingly, sellers in the the South West [34%] and Wales [46%] were most convinced that listing their home on the market now would help them achieve the best possible value. Notably, no respondents in the South West disagreed that they would achieve the best possible price for their home by selling now.

This chimes with the latest listing data, which reveals the South West counties of Devon, Dorset, and Cornwall as registering the largest increases in stock this summer.

"This uplift in stock is in stark contrast to the market we saw at the start of the year, in which we had at least 20 buyers for every one listing on our books," says Ben Standen, Director at Jackson Stops Truro. "Now we easily have double the listings that we had back in May, with a return to much more normal levels compared to the frenzied buyer numbers that previously circled each sale.

He continues, "In the past few weeks, more sellers have chosen to list their home in the belief that house prices nor buyer demand can sustain through to next year in the face of higher interest rates and a tighter borrowing climate. Interestingly however, as demand remains high especially with cash buyers, this has had little impact on sold prices being achieved. Cornwall's perfect mix of historic towns, undulating countryside and waterside living, continues to make it a haven for lifestyle buyers since the pandemic. The coast always rides the wave of a hot market and is often immune from wider house price changes." 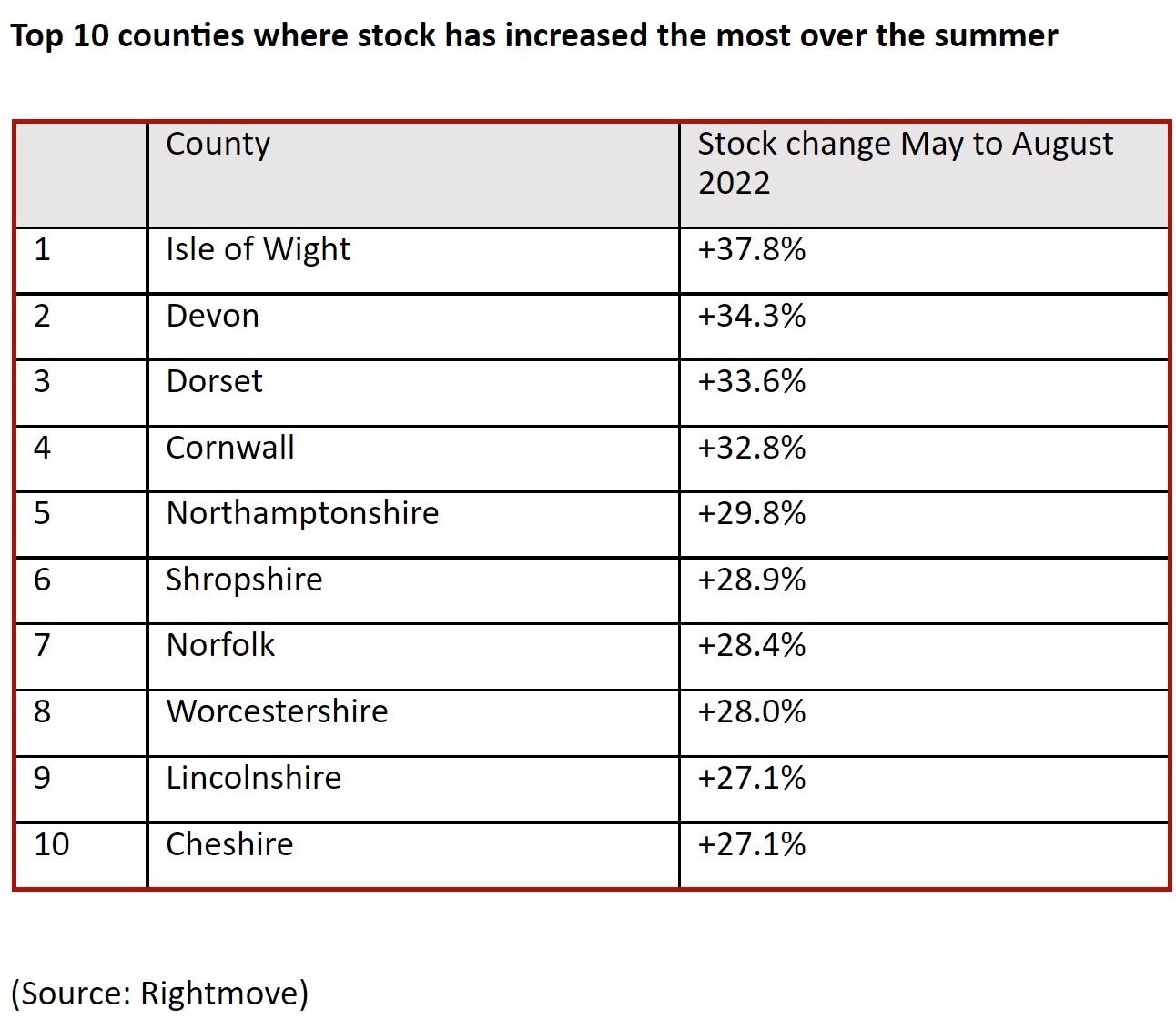 According to the survey, two-thirds [63%] of those aged over-65's have cited that financial pressures, such as interest rates, high inflation and the cost-of-living, have no impact on their decision to move house at present. This is reflective of the 74% of people aged over-65 who own their home outright, with just 4.6% of this age bracket still paying off a mortgage.

Nick says, "The split response from our survey is indicative of two property markets working in contradiction at the moment. Firstly, those existing homeowners who have been fortunate enough to benefit from house price growth over the past five to ten years, seeing their capital - and borrowing power - grow before their eyes. The other market is the many first-time buyers who don't have a capital asset to benefit from and are inevitably hardest hit by the cost-of-living squeeze. With this in mind, we were pleased to see the Government's update last week on Stamp Duty Land Tax relief directed to first-time buyers."