Affordable Atlanta a popular destination for home buyers leaving expensive coastal cities this year
According to property broker Redfin, people moving to the Atlanta area from pricey, liberal metros like New York, Washington, D.C. and Los Angeles is likely one factor helping tilt Georgia blue in the 2020 presidential election for the first time in 28 years

About 50,000 more people moved into Georgia from other states than left in 2019, the sixth biggest net increase of any state in the U.S., according to the U.S. Census.

In the Atlanta metro, 26% of Redfin.com home searches were from users outside the state in October. Atlanta was the fifth-most popular destination in the U.S. for Redfin.com users looking outside their home metro in October, behind Sacramento, Las Vegas, Phoenix and Austin. Atlanta is perennially on the list of most popular destinations for people looking to move to a different area, and the net inflow of people looking to move to Atlanta has increased 43% since last year. A net inflow means more people are looking to move in than leave.

"Atlanta has grown tremendously in the last two decades, which is one reason why Georgia is turning blue," said local Redfin real estate agent Cynthia Little. "The area is a magnet for people from all over the country because in addition to having a lower cost of living than most big cities, Atlanta is home to many big companies like Delta, Home Depot and Coca Cola, plus a fast-growing film and television business. Put it all together and the population is shifting away from older, Republican-minded residents and toward a younger, more diverse group of people, many who are migrating from Democratic states like California and New York."

The New York City metro was the top origin for people looking to move into Atlanta from out of state in October, with 37.3% of searches from outside the area coming from New York. Washington, D.C., Los Angeles, the Bay Area and Chicago round out the top five most common origins for people moving to Atlanta.

Affordability is a key reason people are moving to Atlanta from outside the area, particularly as people become more free to move to different metro areas with pandemic-driven remote work opportunities. The typical home in the Atlanta metro sold for $285,000 in October, compared with $550,000 in the New York metro (excluding Manhattan), $458,000 in Washington, D.C., $735,000 in Los Angeles, $1.43 million in San Francisco and $275,000 in Chicago.

The Atlanta suburbs, key to flipping Georgia blue, are more Democratic and more diverse than they were a decade ago

"The pandemic has caused people who are moving to the Atlanta area from out of state--and people who currently live in the city--to flock to the suburbs," Little said. "Priorities have changed, with people looking for room to work, homeschool and entertain themselves on their own property. Now suburbs are attracting people from all walks of life who want more space for less money."

The uptick in people of color is one reason the Atlanta suburbs became more Democratic in 2020; preliminary data from the New York Times shows that 87% of Black Americans, 65% of Hispanic/Latino Americans and 61% of Asian Americans nationwide voted for Joe Biden, versus 41% of white Americans. In

People of color making up a larger share of the suburban Atlanta population has not translated to an increase in Black homeownership. In Fulton County, 37.8% of Black households owned their homes in 2018, down from 44.1% in 2010. The homeownership rate for white households in Fulton County also declined, from 69.8% to 66.2%.

The city of Atlanta and its suburbs have also become denser over the last decade, which is partly a reflection of the area's increasing popularity. There were 16% more people living in the city of Atlanta in 2018 than 2010, and 13% more people living in the Atlanta suburbs over that same time period. That's a significantly bigger uptick than the country as a whole, which saw a 5.1% increase in city population and a 4.4% increase in suburban population. 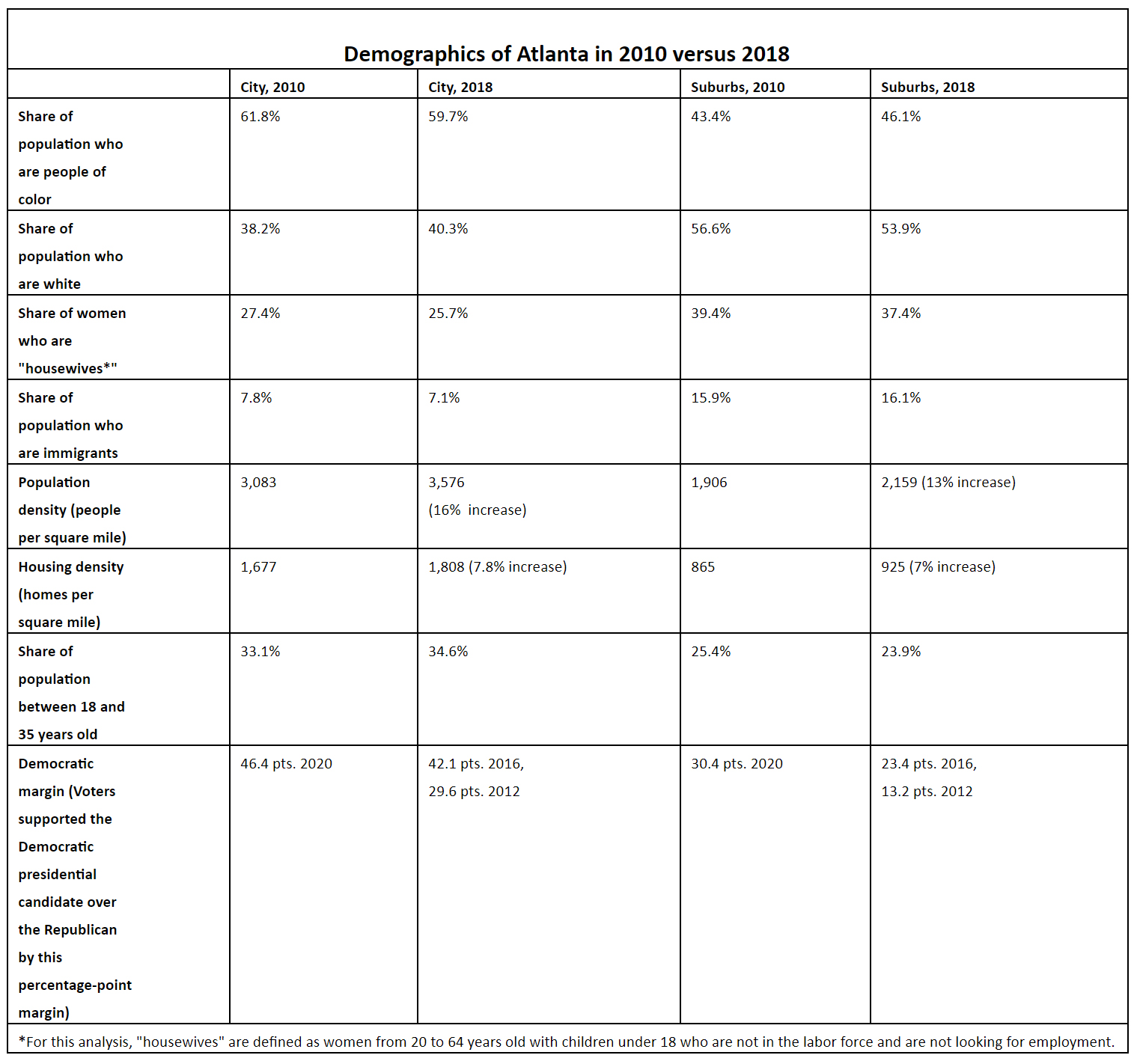 Home prices are up; supply is tight in the Atlanta metro

The typical home in the Atlanta metro sold for a record $285,000 in October, up 16.3% from the year before. That's a more affordable price than the national median of $335,000, but a larger year-over-year increase than the 14.1% national uptick.

"The trend toward remote work has given many people the freedom to move to different parts of the country and the ability to prioritize affordability over living close to a job center," said Redfin chief economist Daryl Fairweather. "Atlanta and its suburbs exemplify what people are looking for right now, with spacious homes for affordable prices in a warmer climate than the Northeast. And given the choice to live anywhere in the country, some homebuyers prefer southern living to the East or West coast."

There was a 17.4% increase in Atlanta-area home sales in October from the year before, with 28% fewer homes for sale than the year prior.

Competition is also up significantly in Atlanta, with the typical home spending just 25 days on the market before going under contract, 12 fewer days than a year ago. Nearly 31% of homes that sold in October went for above list price, an 11.7 percentage-point increase from the year before.