According to a new joint study on millennial student loan debt released today by the National Association of Realtors and nonprofit American Student Assistance, despite being in the prime years to buy their first home in the U.S., an overwhelming majority of millennials with student debt currently do not own a home and believe this debt is to blame for what they typically expect to be a seven-year delay from buying.

The survey additionally revealed that student debt is holding back millennials from financial decisions and personal milestones, such as adequately saving for retirement, changing careers, continuing their education, marrying and having children.

NAR and ASA's new study found that only 20 percent of millennial respondents currently own a home, and that they are typically carrying a student debt load ($41,200) that surpasses their annual income ($38,800). Most respondents borrowed money to finance their education at a four-year college (79 percent), and slightly over half (51 percent) are repaying a balance of over $40,000.

Among the 80 percent of millennials in the survey who said they do not own a home, 83 percent believe their student loan debt has affected their ability to buy. The median amount of time these millennials expect to be delayed from buying a home is seven years, and overall, 84 percent expect to postpone buying by at least three years.

"The tens of thousands of dollars many millennials needed to borrow to earn a college degree have come at a financial and emotional cost that's influencing millennials' housing choices and other major life decisions," said Lawrence Yun, NAR chief economist. "Sales to first-time buyers have been underwhelming for several years now, and this survey indicates student debt is a big part of the blame. Even a large majority of older millennials and those with higher incomes say they're being forced to delay homeownership because they can't save for a down payment and don't feel financially secure enough to buy."

According to Yun, the housing market's lifecycle is being disrupted by the $1.4 trillion of student debt U.S. households are currently carrying. In addition to softer demand at the entry-level portion of the market, a quarter of current millennial homeowners said their student debt is preventing them from selling their home to buy a new one, either because it's too expensive to move and upgrade, or because their loans have impacted their credit for a future mortgage.

"Millennial homeowners who can't afford to trade up because of their student debt end up staying put, which slows the turnover in the housing market and exacerbates the low supply levels and affordability pressures for those trying to buy their first home," added Yun.

In addition to postponing a home purchase, the survey found that student debt is forcing millennials to put aside several additional life choices and financial decisions that contribute to the economy and their overall happiness. Eighty-six percent have made sacrifices in their professional career, including taking a second job, remaining in a position in which they were unhappy, or taking one outside their field. Furthermore, more than half say they are delayed in continuing their education and starting a family, and 41 percent would like to marry but are stalling because of their debt.

Even more concerning, according to Yun, is that it appears many millennials are putting saving for retirement on the backburner because of their student debt. Sixty-one percent of respondents at times have not been able to make a contribution to their retirement, and nearly a third (32 percent) said they were at times able to contribute but with a reduced amount.

"Being unable to adequately save for retirement on top of not experiencing the wealth building benefits of owning a home is an unfortunate situation that could have long-term consequences to the financial well-being of these millennials," said Yun. "A scenario where only those with minimal or no student debt can afford to buy a home and save for retirement is not an ideal situation and is one that weakens the economy and contributes to widening inequality."

A better understanding of college costs is needed

The financial pressures many millennials with student debt are now experiencing appear to somewhat come from not having a complete understanding of the expenses needed to pay for college. Only one-in-five borrowers indicated in the survey that they understood all of the costs, including tuition, fees and housing.

"Student debt is a reality for the majority of students attending colleges and universities across our country. We cannot allow educational debt to hold back whole generations from the financial milestones that underpin the American Dream, like home ownership," said Jean Eddy, president and CEO at ASA. "The results of this study reinforce the need for solutions that both reduce education debt levels for future students, and enable current borrowers to make that debt manageable, so they don't have to put the rest of their financial goals on hold."

"Realtors are actively working with consumers and policy leaders to address the growing burden student debt is having on homeownership," President William E. Brown, a Realtor from Alamo, California. "We support efforts that promote education and simplify the student borrowing process, as well as underwriting measures that make it easier for homebuyers carrying student loan debt to qualify for a mortgage." 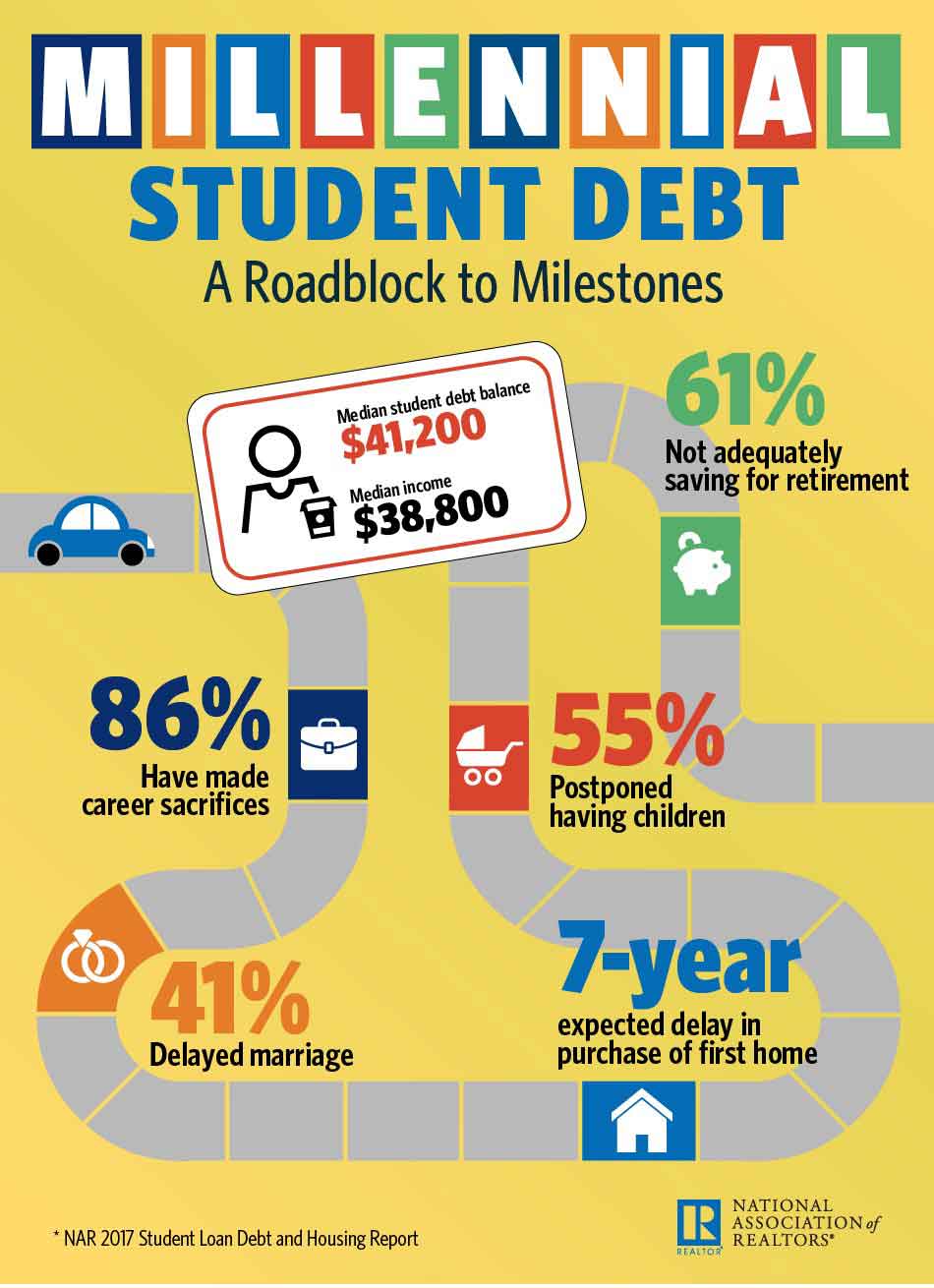 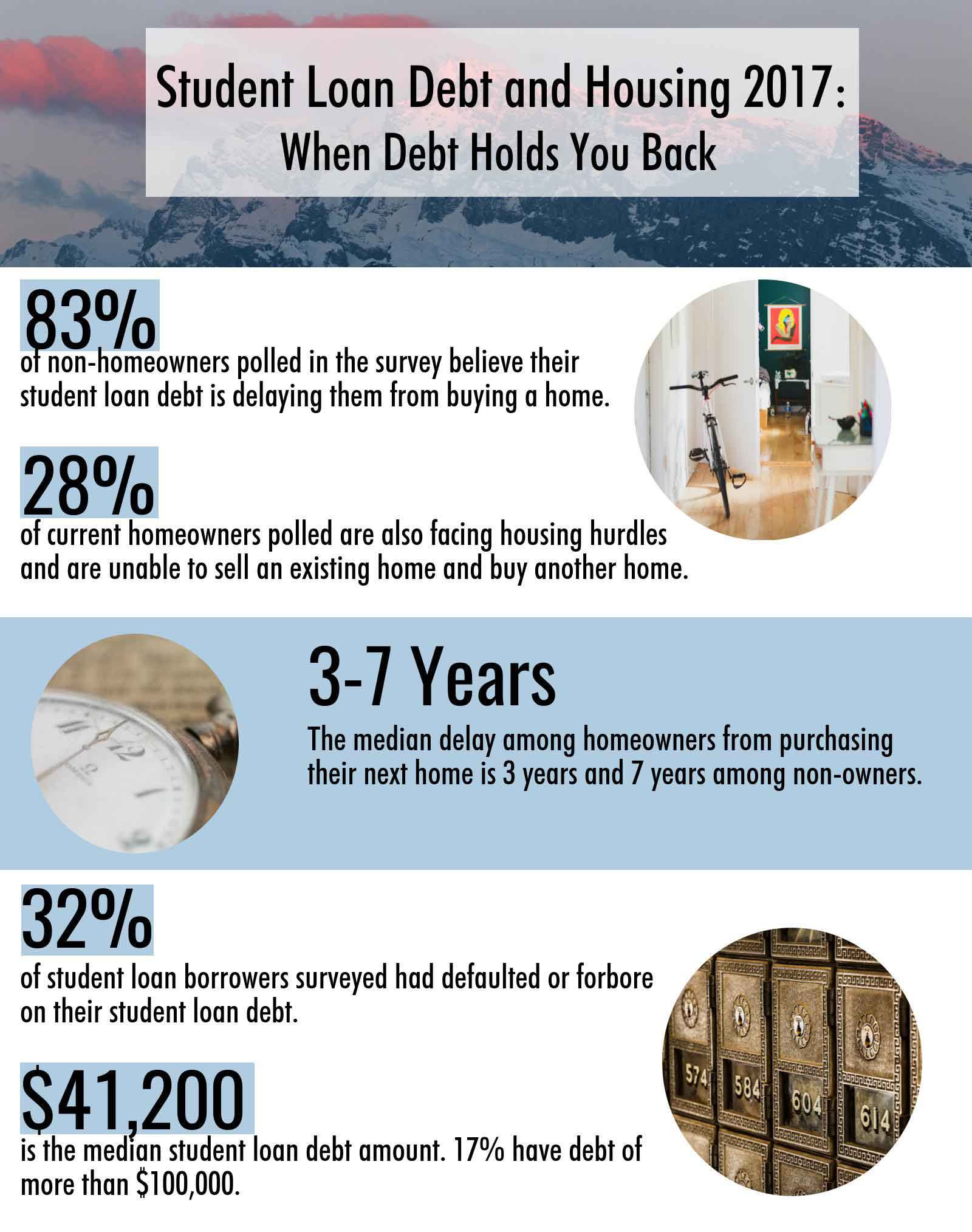