According to the National Association of Realtors, existing-home sales rebounded in May following a notable decline in April, and low inventory levels helped propel the median sales price to a new high while pushing down the median days a home is on the market to a new low. All major regions except for the Midwest saw an increase in sales last month.

Total existing-home sales, which are completed transactions that include single-family homes, townhomes, condominiums and co-ops, climbed 1.1 percent to a seasonally adjusted annual rate of 5.62 million in May from a downwardly revised 5.56 million in April. Last month's sales pace is 2.7 percent above a year ago and is the third highest over the past year.

Lawrence Yun, NAR chief economist, says sales activity expanded in May as more buyers overcame the increasingly challenging market conditions prevalent in many areas. "The job market in most of the country is healthy and the recent downward trend in mortgage rates continues to keep buyer interest at a robust level," he said. "Those able to close on a home last month are probably feeling both happy and relieved. Listings in the affordable price range are scarce, homes are coming off the market at an extremely fast pace and the prevalence of multiple offers in some markets are pushing prices higher."

Total housing inventory at the end of May rose 2.1 percent to 1.96 million existing homes available for sale, but is still 8.4 percent lower than a year ago (2.14 million) and has fallen year-over-year for 24 consecutive months. Unsold inventory is at a 4.2-month supply at the current sales pace, which is down from 4.7 months a year ago.

"Home prices keep chugging along at a pace that is not sustainable in the long run," added Yun. "Current demand levels indicate sales should be stronger, but it's clear some would-be buyers are having to delay or postpone their home search because low supply is leading to worsening affordability conditions."

Inventory data from realtor.com reveals that the metropolitan statistical areas where listings stayed on the market the shortest amount of time in May were Seattle-Tacoma-Bellevue, Wash., 20 days; San Francisco-Oakland-Hayward, Calif., 24 days; San Jose-Sunnyvale-Santa Clara, Calif., 25 days; and Salt Lake City, Utah and Ogden-Clearfield, Utah, both at 26 days.

"With new and existing supply failing to catch up with demand, several markets this summer will continue to see homes going under contract at this remarkably fast pace of under a month," said Yun.

First-time buyers were 33 percent of sales in May, which is down from 34 percent in April but up from 30 percent a year ago. NAR's 2016 Profile of Home Buyers and Sellers - released in late 2016 - revealed that the annual share of first-time buyers was 35 percent.

Existing condominium and co-op sales climbed 1.6 percent to a seasonally adjusted annual rate of 640,000 units in May, and are 3.2 percent higher than a year ago. The median existing condo price was $238,700 in May, which is 4.8 percent above a year ago. 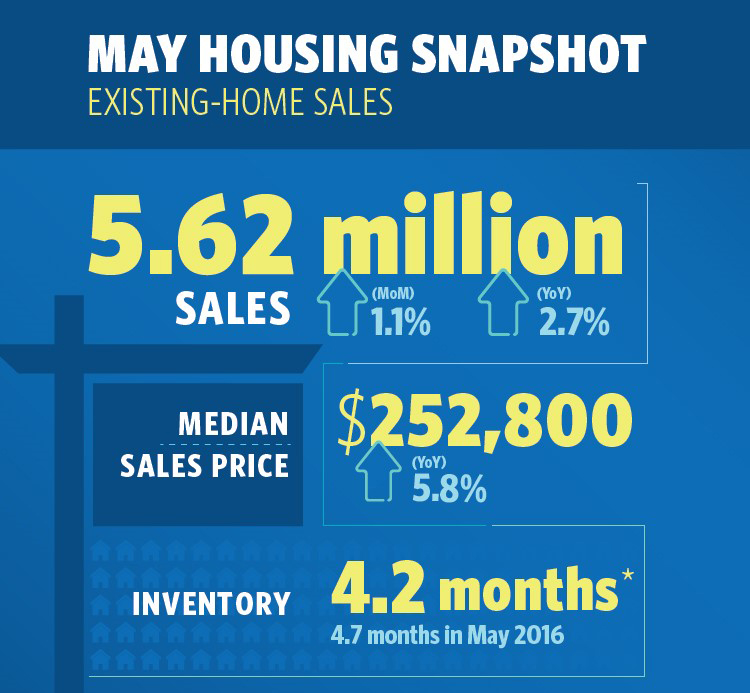