New Home Construction Sales in Q3 Reached a Record-High in the U.S.

Newly-built homes have been taking up a growing portion of overall housing supply since 2011, when building started to rebound after the financial crisis. The trend is now intensifying due to a surge in construction during the pandemic and a recent slowdown in existing homeowners putting their houses up for sale. Single-family housing starts rose 14% year over year in 2021, the largest annual increase since 2013. As a result, more single-family homes housing units were completed in the third quarter than any quarter since 2007. In September alone, the number of completed new homes for sale was up 19% from the prior month.

"Homebuilders started scores of projects during the pandemic moving frenzy and are now stuck with a bunch of new houses that are hard to sell because mortgage rates have risen to 7%," said Faith Floyd, a Redfin real estate agent in Houston. "Builders are giving away everything but the kitchen sink to attract bidders. Many are offering to buy down the buyer's mortgage rate by 1.5 points, and I've seen at least one offer a $10,000 check for closing costs, a $3,000 gift card and a free fridge. This one way builders will dig themselves out of the hole they're in."

Floyd continued: "Many builders are offering more incentives than regular sellers. A lot of individual sellers are still pricing their homes too high because they're having a hard time accepting that the pandemic housing boom is over and they're not going to get 30 offers like their neighbor did last year."

Builders are also dangling incentives in front of real estate agents. Floyd said some are offering agents a 5% commission, up from 0% during the pandemic and the typical 3% before the pandemic, in addition to bonuses of $6,000.

With a glut of inventory on their hands, builders will likely ease up on construction in 2023, according to Redfin Deputy Chief Economist Taylor Marr.

"Homebuilders will take on fewer new projects next year as they focus on getting their existing projects sold," Marr said. "Builders will also shift more toward multifamily units, for which there is still relatively high demand because rents remain high."

Many of the metro areas with relatively high shares of new homes for sale have something in common: They ramped up building during the pandemic because they exploded in popularity with out-of-town buyers, and are now seeing significant slowdowns in their housing markets. More than half of the metros in the top 20 are in Texas or Florida--hot pandemic migration destinations with room to build. More than one-quarter of the top 20 are now on Redfin's list of fastest cooling housing markets.

The southwestern Florida metro of North Port was consistently one of the top migration destinations during the pandemic because it offers relative affordability and sunshine. That caused home prices and construction to surge. Building permits in North Port soared 68% year over year in 2021, while home prices rose 21%. Because it heated up so much during the pandemic, it's now one of the fastest cooling markets. That's causing many existing homeowners to hold off on listing, which is causing listings of newly built homes to take up an even larger share of the market.

It's worth noting that North Port was hit hard by Hurricane Ian in late September, and has since seen a large drop in sales and new listings as a result--intensifying the market slowdown. 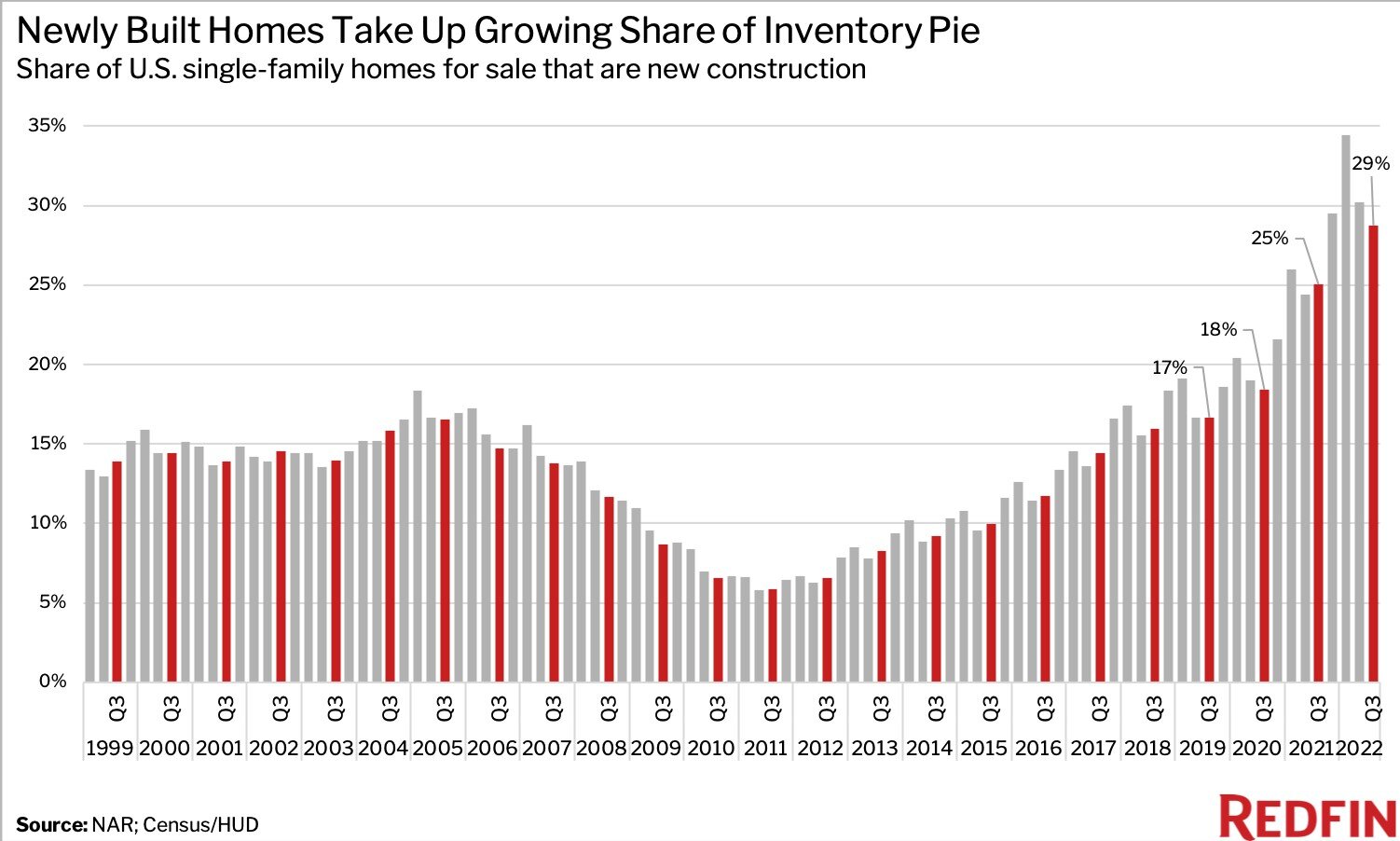