According to the National Association of Realtors, despite ongoing inventory shortages and faster price growth, U.S. existing-home sales sustained their recent momentum and moved higher for the second consecutive month. A surge in sales in the Midwest and a decent increase in the Northeast offset smaller declines in the South and West.

Total existing-home sales, which are completed transactions that include single-family homes, townhomes, condominiums and co-ops, rose 1.7 percent to a seasonally adjusted annual rate of 5.45 million in April from an upwardly revised 5.36 million in March. After last month's gain, sales are now up 6.0 percent from April 2015.

Lawrence Yun, NAR chief economist, says April's sales increase signals slowly building momentum for the housing market this spring. "Primarily driven by a convincing jump in the Midwest, where home prices are most affordable, sales activity overall was at a healthy pace last month as very low mortgage rates and modest seasonal inventory gains encouraged more households to search for and close on a home," he said. "Except for in the West - where supply shortages and stark price growth are hampering buyers the most - sales are meaningfully higher than a year ago in much of the country."

Total housing inventory at the end of April increased 9.2 percent to 2.14 million existing homes available for sale, but is still 3.6 percent lower than a year ago (2.22 million). Unsold inventory is at a 4.7-month supply at the current sales pace, up from 4.4 months in March.

"The temporary relief from mortgage rates currently near three-year lows has helped preserve housing affordability this spring, but there's growing concern a number of buyers will be unable to find homes at affordable prices if wages don't rise and price growth doesn't slow," adds Yun.

"Looking ahead, with demand holding steady and supply levels still far from sufficient, the market for entry-level and mid-priced homes will likely continue to be the most competitive heading into the summer months," says Yun. 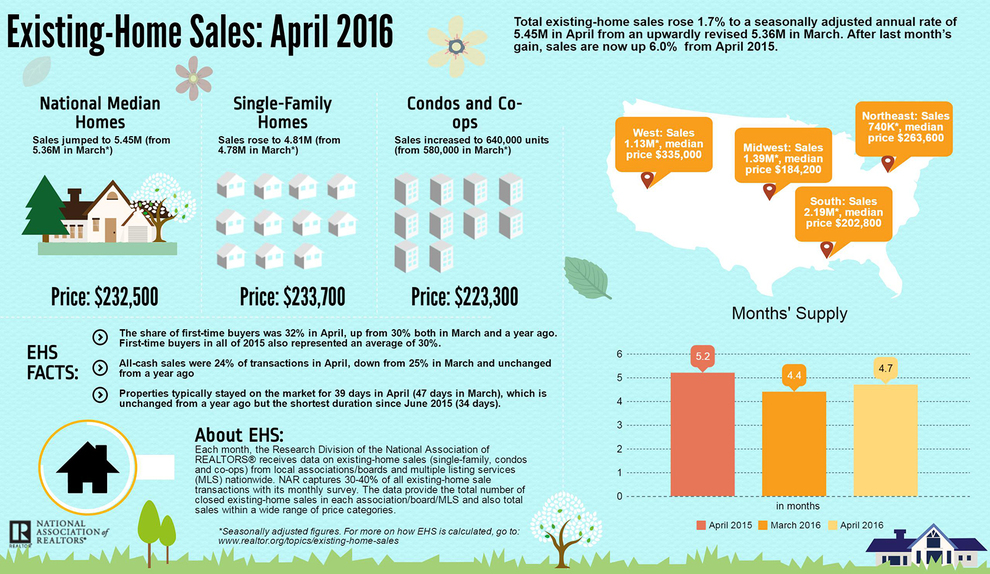