When Captain James Cook was credited with discovering Hawaii in 1778, the British explorer landed on what is considered one of the most remote land masses in the world. Situated near the center of the Pacific Ocean, Hawaii is a long 2,390 miles west of California and 3,850 miles east of Japan.

Remote status notwithstanding, visitors continue to flock to this dreamy Pacific Ocean paradise. For full disclosure, my family discovered Hawaii in 1977 and we've been residents ever since.

Personal connections notwithstanding, whether it's the lovely year-round weather, lush tropical settings, pleasant Polynesian culture or world-class beaches and resorts, the Islands offer a certain allure that resonates on many levels to the 8.2 million tourists that visited last year.

Unbeknownst to many visitors is the Hawaiian archipelago actually comprises 132 islands, reefs and shoals extending 1,523 miles from Kure Atoll in the north to Nihoa in the south.

Overall the islands cover 6,423 square miles. Of course, Hawaii has eight main islands that make up more than 99 percent of the state's total land area. In order of size:  Hawaii, or the Big Island as it's commonly called, Maui, Oahu, Kauai, Lanai, Molokai, Niihau and Kahoolawe.

Of the six main islands tourists typically visit (Niihau is privately owned and Kahoolawe is set aside as state land and not accessible to the public), Oahu is where all the action is.  The island's nickname is the "Gathering Place" and with good reason considering its home to more than 70 percent of Hawaii's 1.36 million people - my family included.

Indeed, Oahu is the bustling "big-city' main island, known for its signature city, Honolulu, and the world-renowned Waikiki Beach and its 2-mile-long stretch of high-end shops, beautiful beaches and top-rated resort and restaurants. But Oahu also is home to historic Pearl Harbor, famous North Shore surfing spots such as Pipeline, Waimea Bay and Sunset Beach and the upscale kickback community of Kailua, where President Obama and his family stays on vacation in a rented beachfront home.

Here's an itinerary I'd recommend to anybody visiting my home island of Oahu: 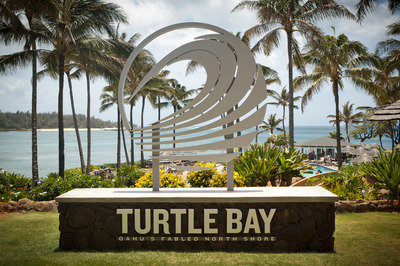 I love peninsulas. I live on one in Florida. And I had the pleasure to recently enjoy one of the most beautiful peninsulas on the planet here on Oahu's fabled North Shore.

Few resorts can claim 100 percent of their guest rooms, spa treatment rooms, fitness room bikes, restaurants and ballrooms have an ocean view. Then again, how many resorts are built on a peninsula at the northernmost tip of an island at the last break along a famous stretch of surfing coastline?

Turtle Bay Resort might be the only one that fits that bill. Located on a pristine 840-acre stretch of raw one-time Kahuku sugar plantation land, Turtle Bay features five miles of unspoiled beach and every one of the resort's 410 rooms and 42 beach cottages have unobstructed views of the Pacific from the ocean's edge.

This rare beauty is what initially attracted Del Webb in 1972 to build a resort community in what was then a sleepy sugar cane mill town. More than 40 years later, the place is even sweeter thanks to a fresh $30 million renovation by the new owners and the attentive care of new asset manager Replay Resorts. 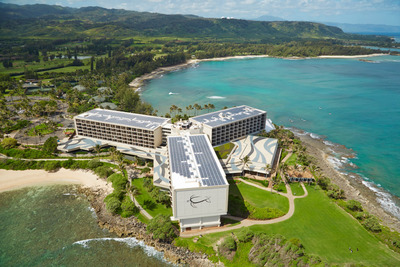 The new infusion of capital improvements, about a decade after previous owners invested $60 million into the property, is an important milestone for Turtle Bay as it continues an extensive re-branding campaign focusing on creating "authentic, once-in-a-lifetime experiences found only on the North Shore," according to Replay Resorts.

Situated at the start of the mecca of surf, or the "7-mile miracle," Turtle Bay is positioning itself as the epicenter of health, wellness and adventure. If you want to discover another side of Oahu, or Hawaii for that matter, this is it.

Whether it's horseback riding, playing 36 holes of golf designed by Arnold Palmer and Tom Fazio that has played host to numerous Senior PGA Tour and LPGA Tour events, taking a helicopter ride, hiking or ending water sports, Turtle Bay has it all in a unrefined laidback sophisticated setting.

And the best part is all 410 main building guest rooms and hallways have been upgraded and completely modeled and the restaurant and bar scene has been greatly enhanced with North Shore Kula Grille and Pa'akai restaurants and Surfer, The Bar - a collaboration between Turtle Bay and Surfer magazine.

For those seeking a private residence inside the unmanned gates of the main resort (Replay decided to do away with the un-Hawaiian like gated resort feel), Kuilima Estates along the first hole of the Fazio Course has several fee-simple 1-bedroom condos built in 1973 for sale as high as $396,000. Meanwhile, a stunning 4-bedroom, 3-bathroom, 2,549-square-foot ground-floor townhome with direct oceanfront access is listed at $2.9 million. 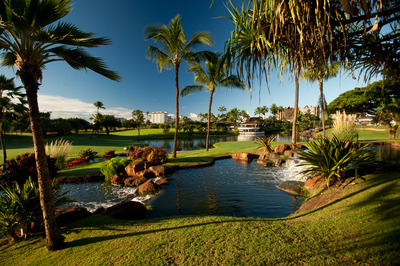 As you head back into "town," or the hub of Honolulu, a booming part of Oahu on the leeward dry coast is this 642-acre master-planned vacation and residential community. Just 17 miles northwest of Honolulu, Ko Olina features two miles of coastal frontage, including three natural and four man-made lagoons and a string of world-class resort accommodations.

Now for the first time ever, you can own a piece of an island paradise that truly embraces the beauty and 'Aloha Spirit of Hawaii' with the family-oriented 'Magic of Disney'. And it can be done at a remarkably affordable way courtesy of Disney Vacation Club, which comprises half of the 800-unit resort. 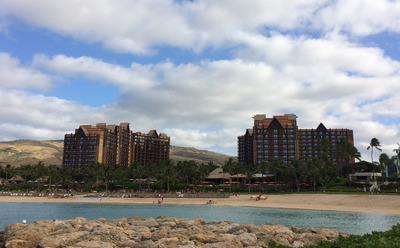 Indeed, this small timeshare piece of paradise is good through the year 2062 and starts at approximately $30,000 for a peak-season week in an ocean-view studio.

What makes highly acclaimed Aulani so special is the authenticity of the place. For instance, overall architectural and interior design elements are inspired by Hawaii's rich history, culture and natural beauty, from touches of dramatic volcanic rock throughout the open-air lobby to various pools of water, lush tropical landscaping and the world-class 18,000 square-foot-spa.

In fact, this part of Oahu is so special that in true Disney story-telling fashion, Ko Olina actually dates back to King Kamehameha the Great and his favorite wife Queen Ka'ahumanu, who used to come to what is now Ko Olina for sacred retreats, rest and relaxation themselves.

"This resort hotel will give our guests another way to visit an exciting part of the world with a brand they trust," former Walt Disney Parks & Recreation chairman Jay Rasulo was quoted at the time Disney announced it was finalizing plans to purchase the 21 acres of oceanfront property.  "In fact, Hawaii has been among our most requested Disney Vacation Club getaway locations beyond our theme parks. We are looking forward to building a special family resort that honors the cultural diversity of Hawaii and reflects the spirit of aloha that makes this location so unique."

Jeff Stone, President of The Resort Group and master developer of Ko Olina, was thrilled to have the Disney brand help bring greater awareness to his upstart growing community.

"Ko Olina means 'place of joy,' and I can't imagine a more perfect fit here than a Disney resort that will bring joy to people from around the world," Stone was quoted as saying. "For many years, it has been our vision to continue to expand Ko Olina as a premier vacation destination for families and business travelers, and this new Disney resort hotel is making that vision a wonderful reality."

This resort is one of Hawaii's most prestigious vacation properties, situated around the corner from iconic Diamond Head Crater on the end of the exclusive and secluded Kahala Avenue. Set on an 800-foot stretch of sugary white sand beach just ten minutes from the world-class shopping and entertainment district of Waikiki, this legendary Hawaiian hideaway in the plush Kahala district is a favorite with heads of state, honeymooners, celebrities and corporate executives. 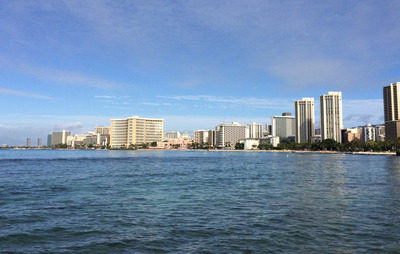 Bordering the property is famous Waialae Country Club, which plays host to the PGA Tour every year, and Honolulu International Airport is a quick and convenient 13 miles away via the H-1 freeway.

Since its opening in 1964, The Kahala has hosted for accommodations or held events for every American President since Lyndon Baines Johnson, legions of foreign royalty and dignitaries, a plethora of cinema and rock stars, and even His Holiness the Dalai Lama.

Just minutes away from the resort is Kahala Mall and nearby is the ocean-side "Shangri La" estate of famed heiress Doris Duke with its collection of Islamic art and artifacts, now under the direction of the Honolulu Museum of Art. Just east of The Kahala are snorkeling the famous snorkeling and surfing spots of Hanauma Bay and Sandy Beach.

For those seeking a more permanent residency in this ritzy section of Oahu, publicly traded Alexander & Baldwin has been helping drive a resurgence in top-dollar Kahala real estate properties. For instance, the large landowner/developer reported in its first quarter earnings report May 7 that it was scheduled to close on the sale of two Kahala Avenue oceanfront properties formerly owned by controversial Japanese businessman Genshiro Kawamoto

The two sales would bring the total Kahala Avenue property purchases to 20 for a total revenue of about $120 million. Local experts value the properties at $200 million.

Of the remaining 10 properties left in the former Kawamoto portfolio, four, which comprise of nearly 70 percent of the portfolio's remaining saleable square footage, are oceanfront parcels, A&B said.

In its 2014 annual report released in March, A&B said it sold about half of the Kahala properties it acquired from Kawamoto in 2013. Alexander & Baldwin had purchased the 30 "Estates of Kahala" properties for about $128 million. As of Dec. 31, sales of the properties had generated a total of $82.5 million, the company reported.
Last November, A&B sold the beachfront property once owned by Hawaii philanthropist and Pacific Construction Company co-founder Cecily Johnston for $19.4 million. Once a gorgeous estate that hosted celebrities, presidents and heads of state, Kawamoto demolished the home and let the 63,000-square-foot parcels deteriorate.

According to the Coldwell Banker Pacific Properties team that brokered the sale, it was Oahu's highest-priced land sale since 2006. The wealthy new Kahala property owners buying up these A&B lots are already starting to put new life into the parcels, pumping millions of dollars into construction and landscaping. They include a professional poker player, South Korea's wealthiest person, a car-racing money manager from Michigan and an Australian billionaire, according to Pacific Business News.

For a more laidback, peaceful boutique experience, this local institution never disappoints. Situated at the base of Diamond Head, across from Kapiolani Park and at the far eastern edge of busy Waikiki, Kaimana is a taste of old Hawaii in a stunning setting.

Kaimana opened in the late 1940s on property that once belonged to the McInerny family of traders. In 1964, it changed hands and the 9-story building underwent major renovations, reopening with 156 rooms, including a collection of must-stay family suites, overlooking one of the most popular local hangouts, Sans Souci Beach.

Kaimana is so popular, generations of families have been frequenting the property for decades, often times staying weeks and months on end. One of the most peaceful settings in all of Honolulu is Kaimana's Hau Tree Lanai, where locals, celebrities and repeat tourists come for the best breakfast atmosphere in town.

The popular restaurant is named after the massive late 19th-century Hau Tree or Hawaiian Banyan Tree that sits in the middle of the open-air beachfront "lanai," and once provided shade for Scottish writer Robert Louis Stevenson in his post "Treasure Island" days. Today, it's a place that serves the perfect 10 of a breakfast: fresh papaya with lime, eggs benedict and Kona coffee as the Hawaiian sun rises over the glistening blue Pacific waters and surfers catch the early morning waves.