According to Cushman and Wakefield, U.S. industrial property vacancy rates have dropped to its lowest level in more than a decade during the third quarter of 2014.

"Continued economic recovery, the evolution of e-commerce and a resurgence in domestic manufacturing have infused resiliency into the market for industrial space," noted Cushman & Wakefield's John Morris, leader of Industrial Services for the Americas. "Our sector continues to expand faster than other property classes, fueled by shifting consumer demand and retail service paradigms, and global growth dynamics."

"Robust demand has led to 255.2 million square feet of leasing activity year-to-date, which is about the same level as a year ago and on track to surpass last year's total," Morris said. Sixteen markets posted increased activity year-over-year. Eleven markets showed double-digit gains, led by Atlanta and Central New Jersey, where leasing volume was up 32.3 percent and 25.2 percent year-over-year, respectively.

"We are on pace to easily surpass last year's absorption total," Morris said. "Demand from both traditional and online retailers is putting a strain on the supply of available class A logistics product. This, in turn, is resulting in substantial rental growth. Average industrial direct asking rent in the U.S. is up 6.2 percent from a year ago to $6.21 per square foot." Peak direct asking rentals can be found in California's San Francisco Peninsula, $19.62 per square foot; Silicon Valley, $15.76 per square foot; and San Diego, $11.40 per square foot.

The growing supply/demand imbalance also has pushed the market for spec development into high gear, according to Morris. "Spec building now accounts for 63 percent of the 99.9 million square feet currently under construction in the U.S.," he noted. "Developers are responding to both current and anticipated demand. Spec had dropped to about half the pipeline earlier in the year. "

Construction projects involving large buildings of at least 500,000 square feet are on the rise, in response to requirements from e-commerce, 3PLs, and consumer goods. "Industrial buildings are setting new records for scope," Morris said. "The need to improve supply chain efficiency to save time, money and fuel is a driving force behind the rise of 'mega' distribution centers, which allow companies to experiment with different fulfillment strategies and respond to the demands of high-turnover online retailing."

Looking ahead, Cushman & Wakefield anticipates that e-commerce will continue to dominate the conversation when it comes to industrial real estate development.

"Forrester Research has estimated that the online share of the retail sector will rise to the mid-teens during the coming decade, up from less than 10 percent today," Morris noted. "We continue to see a greater emphasis on high-quality space, higher ceiling heights and superior infill locations." 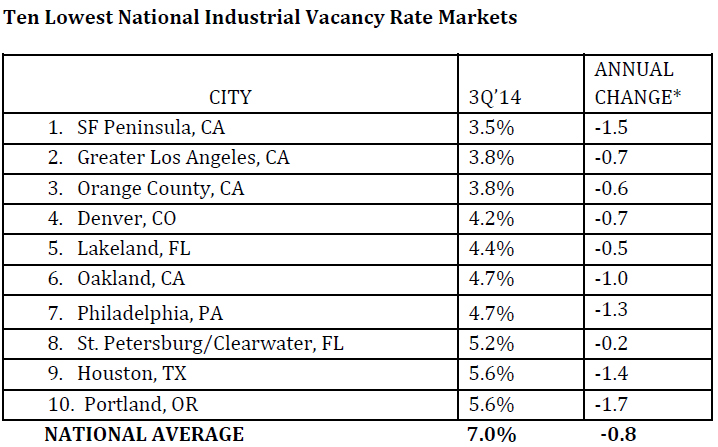