The report also shows that homeowners who sold in the second quarter had owned an average of 8.05 years, up from 7.85 years in the previous quarter and up from 7.59 years in Q2 2016 to the longest average homeownership tenure as far back as data is available, Q1 2000.

"Potential home sellers in today's market are caught in a Catch-22. While it's the most profitable time to sell in a decade, it's also extremely difficult to find another home to purchase, which is helping to keep homeowners in their homes longer before selling," said Daren Blomquist, senior vice president at ATTOM Data Solutions. "And the market is becoming even more competitive, with the share of cash buyers in the second quarter increasing annually for the first time in four years."

Institutional investor sales share down nationwide, up in 26 percent of local markets

The share of U.S. single family home and condo sales sold to institutional investors (entities buying at least 10 properties in a calendar year) was 2.1 percent in the second quarter, up from 1.8 percent in the first quarter but down from 2.6 percent a year ago.

"An ongoing issue in the greater Seattle area is a lack of supply which is aggressively driving up home prices," said Matthew Gardner, chief economist at Windermere Real Estate, covering the Seattle market. "The only short-term solution is to build more homes, but thanks to land constraints and construction costs, this simply is not happening at a rate that you would normally expect in a market like this. Unfortunately I do not expect this trend to change until zoning and regulation costs change, which is unlikely in the current political climate."

Counter to the national trend, the average homeownership tenure in Q2 2017 decreased from a year ago in 25 of 89 metro areas analyzed in the report (28 percent), including Chicago, Dallas, Philadelphia, Washington, D.C., and Detroit.

Counter to the national trend, 39 of the 141 metro areas (28 percent) posted year-over-year increases in share of distressed sales, including New York, New York (up 13 percent); Denver, Colorado (up 3 percent); Pittsburgh, Pennsylvania (up 31 percent); Cincinnati, Ohio (up 19 percent); and Cleveland, Ohio (up 5 percent).

Sales to FHA buyers (typically first time homebuyers or other buyers with a low down payment) represented 14.3 percent of all U.S. single family and condo sales in Q2 2017, down from 14.4 percent of all sales in the first quarter and down from 16.0 percent in Q2 2016 to the lowest level since Q1 2015. 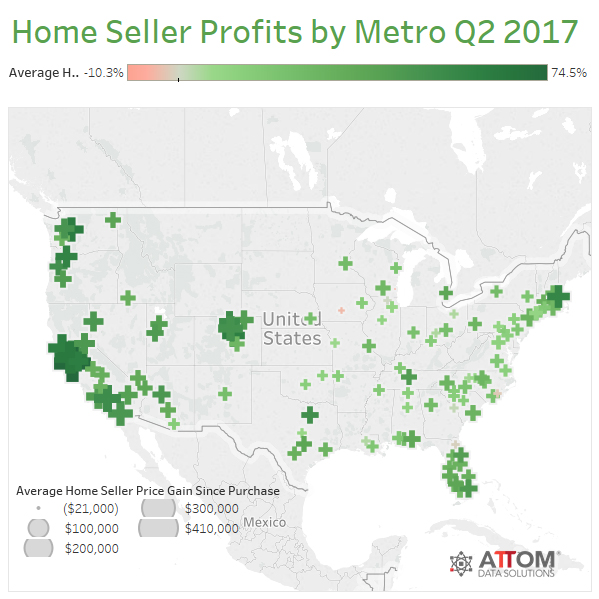