Among the same 123 metro areas analyzed for the report, those with the lowest pre-mover indices in the third quarter were Rochester, New York (35); Akron, Ohio (47); Myrtle Beach, South Carolina (47); Providence, Rhode Island (52); and Cleveland, Ohio (52).

"Home buyers are most likely to move -- and homeowners are more likely to move up -- in markets with plenty of available jobs along with a reasonable supply of homes for sale," said Daren Blomquist, senior vice president at ATTOM Data Solutions. "Markets with this enviable and increasingly rare combination of jobs and housing inventory tend to be in secondary and even tertiary markets that are somewhat off the beaten path. Even in more mainstream markets, the counties with the highest pre-mover indices tend to be in outlying areas where more inventory is available or can be built."

Counties with highest and lowest pre-mover indices in Q3 2017

Among 331 U.S. counties with at least 50,000 single family homes and condos and at least 50 pre-movers in the third quarter, those with the highest pre-mover index were Loudon County, Virginia in the Washington, D.C. area (304); El Paso County, Colorado in the Colorado Springs metro area (300); Prince William County, Virginia in the Washington, D.C. metro area (298); Will County, Illinois in the Chicago metro area (298); and Champaign County, Illinois (258). 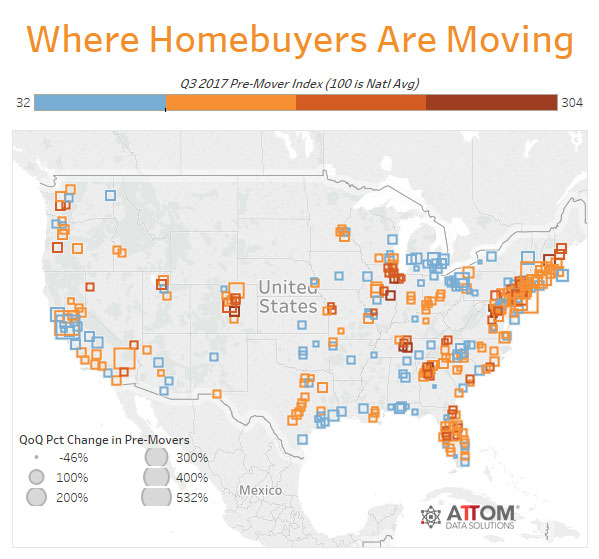