The loan origination report is derived from publicly recorded mortgages and deeds of trust collected by ATTOM Data Solutions in more than 1,700 counties accounting for more than 87 percent of the U.S. population. Counts and dollar volumes for the two most recent quarters are projected based on available data at the time of the report (see full methodology below).

"Buying a home has become a full-contact sport in many markets across the country, and buyers with the beefiest down payments -- not to mention all-cash buyers -- are often able to muscle out those with scrawnier savings," said Daren Blomquist, senior vice president with ATTOM Data Solutions. "Despite the increasingly competitive nature of homebuying, the number of residential property purchase loans nationwide increased to a 10-year high in the third quarter."

Median down payment tops $50,000 in a dozen markets

"Across Southern California factors such as low available listing inventory have resulted in many consumers turning to cash or leveraging investment accounts for cash as alternative methods for funding home ownership and beating out competitors for acceptance of their purchase offers in a highly competitive market," said Michael Mahon president at First Team Real Estate, covering the Southern California market.

"Rising home prices in the Seattle area combined with changes in the mortgage underwriting process have pushed the median down payment over $50,000 and the average down payment to over $100,000," said Matthew Gardner, chief economist at Windermere Real Estate, covering the Seattle market. "We've also seen an increase in new mortgages which is an indication of rising home sales. Most interesting to me is the big jump in new lines of credit which is likely a result of frustrated buyers deciding to stay in their existing homes and remodel rather than deal with the highly competitive Seattle housing market."

Nearly 2.4 million loans (2,386,518) secured by residential property (1 to 4 units) were originated in the third quarter, up 17 percent from the previous quarter but still down 5 percent from a year ago.

A total of 981,773 refinance loans secured by residential property were originated in the third quarter, up 28 percent from the previous quarter but still down 19 percent from a year ago.

A total of 393,602 home equity lines of credit (HELOCs) secured by residential property were originated in the third quarter, up 19 percent from the previous quarter and up 12 percent from a year ago to the highest level since Q2 2008, a more than nine-year high.

Counter to the national trend, 58 of the 120 metro areas analyzed in the report (48 percent) posted a year-over-year decrease in residential property purchase loan originations, including Houston (down 10 percent); Miami (down 6 percent); Atlanta (down 15 percent); Boston (down 7 percent); and Detroit (down 7 percent).

Among 120 metropolitan statistical areas analyzed in the report, those with the biggest year-over-year increase in residential property HELOC loan originations were Reno, Nevada (up 80 percent); Fort Wayne, Indiana (up 74 percent); Peoria, Illinois (up 46 percent); Bremerton, Washington (up 45 percent); and Dallas, Texas (up 43 percent).

Counter to the national trend, 43 of the 120 metro areas analyzed in the report (36 percent) posted a year-over-year decrease in HELOC loan originations, including Houston (down 17 percent); Miami (down 3 percent); Atlanta (down 6 percent); San Francisco (down 1 percent); and St. Louis (down 4 percent).

The report also found that 23.4 percent of all purchase loan originations on single family homes in Q3 2017 involved co-borrowers -- multiple, non-married borrowers listed on the mortgage or deed of trust -- up from 22.8 percent in the previous quarter and up from 21.1 percent in Q3 2016.

The share of co-borrowers increased from a year ago in 33 of 38 U.S. cities analyzed in the report (87 percent), including Las Vegas, Nevada; Houston, Texas; San Antonio, Texas; Phoenix, Arizona; and Colorado Springs, Colorado.

Counter to the national trend, the share of co-borrowers decreased from a year ago in five markets: Austin, Texas; Dallas, Texas; Miami, Florida; Aurora, Colorado; and Memphis, Tennessee.

Share of FHA and VA loans drops from a year ago

Loans backed by the Federal Housing Administration (FHA) accounted for 12.9 percent of all residential property loans originated in the third quarter, down from 13.6 percent in the previous quarter and down from 13.2 percent in Q3 2016.

Loans backed by the U.S. Department of Veterans Affairs (VA) accounted for 6.6 percent of all residential property loans originated in the third quarter, up from 6.5 percent in the previous quarter but down from 7.5 percent in Q3 2016. 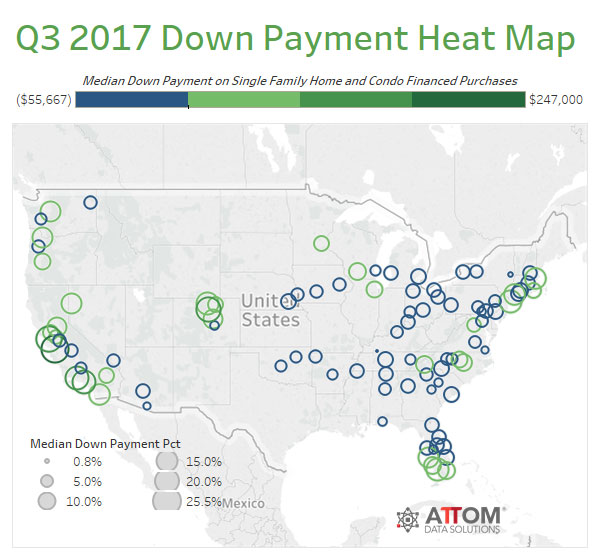