Based on ATTOM Data Solutions newly released Q3 2018 U.S. Home Affordability Report, U.S. home prices in the third quarter of 2018 were at the least affordable level since Q3 2008 -- a 10-year low.

"Rising mortgage rates have pushed home prices to the least affordable level we've seen in 10 years, both nationally and at the local level," said Daren Blomquist, senior vice president at ATTOM Data Solutions. "Close to one-third of the U.S. population now lives in counties where buying a median-priced home requires at least $100,000 in annual income based on our analysis of 440 counties with a combined population of 220 million. U.S. Census net migration data shows negative net migration in more than two-thirds of those highest-priced markets, while more than three-quarters of markets requiring annual income less than $100,000 to buy a home posted positive net migration, indicating that home affordability is at least one factor driving recent migration patterns."

Prospective homebuyers would need to make $100,000 or more to buy a median-priced home in 69 of the 440 counties analyzed in the report (16 percent), assuming a 3 percent down payment and a maximum front-end debt-to-income ratio of 28 percent (see full methodology below).

Other counties where prospective homebuyers would need to make $100,000 or more to buy a median-priced home included counties in Southern California, Washington, D.C., Boston, Seattle and Hawaii.

"Several years of well-above-average home price growth has severely impacted housing affordability in the Seattle region, driven largely by our strong economy and rising incomes that have continued to cause prices to appreciate," said Matthew Gardner, chief economist with Windermere Real Estate, covering the Seattle market, where the 7 percent year-over-year home price appreciation in King County in Q3 2018 was the slowest annual appreciation in three years. "That said, I believe we have reached an inflection point and growth in home values is likely to slow until incomes can catch up."

Nationwide, the median home price of $250,000 in Q3 2018 was up 6 percent from a year ago, twice the annual growth of 3 percent in average wages. U.S. median home prices have increased 76 percent since bottoming out in Q1 2012 while average weekly wages have increased 17 percent over the same period. Meanwhile the average 30-year fixed mortgage rate is up 15 percent since Q1 2012 and up 17 percent just over the past year, according to the Freddie Mac Primary Mortgage Market Survey.

"As most buyers budget based on monthly payments, the median buyer is now able to bid significantly less than before," said Tendayi Kapfidze, chief economist at mortgage marketplace LendingTree, estimating that homebuyers are able to borrow 10 percent less than a year ago because of the rise in interest rates. "This means at each price point the number of buyers is falling, reducing demand. This has had immediate effects on the number of houses sold and will over time reduce the pace of home price increases. This is not cause for alarm however. Home prices have been outpacing incomes since 2012 at a pace that is unsustainable, and a period of consolidation is healthy for the housing market."

Other counties with a population of at least 500,000 and a Q3 2018 affordability index below 80 included counties in the Detroit, Michigan; Nashville, Tennessee; Atlanta, Georgia; and McAllen, Texas metro areas.

Among the 128 counties with a population of 500,000 or more, those with the highest affordability indexes -- most affordable relative to their long-term affordability averages -- were Bristol County, Massachusetts in the Providence, Rhode Island metro area (117); Suffolk County (Long Island), New York (113); Camden County, New Jersey, in the Philadelphia metro area (113); Lake County, Illinois in the Chicago metro area (111); and Jefferson County (Birmingham), Alabama (110).

Highest share of income needed to buy a home in Brooklyn

Nationwide an average wage earner would need to spend 37.0 percent of his or her income to buy a median-priced home in Q3 2018, above the historic average of 34.1 percent.

An average wage earner would not qualify to buy a median-priced home nationwide and in 368 of the 440 counties analyzed in the report (84 percent) based on a 3 percent down payment and a maximum front-end debt-to-income ratio of 28 percent. 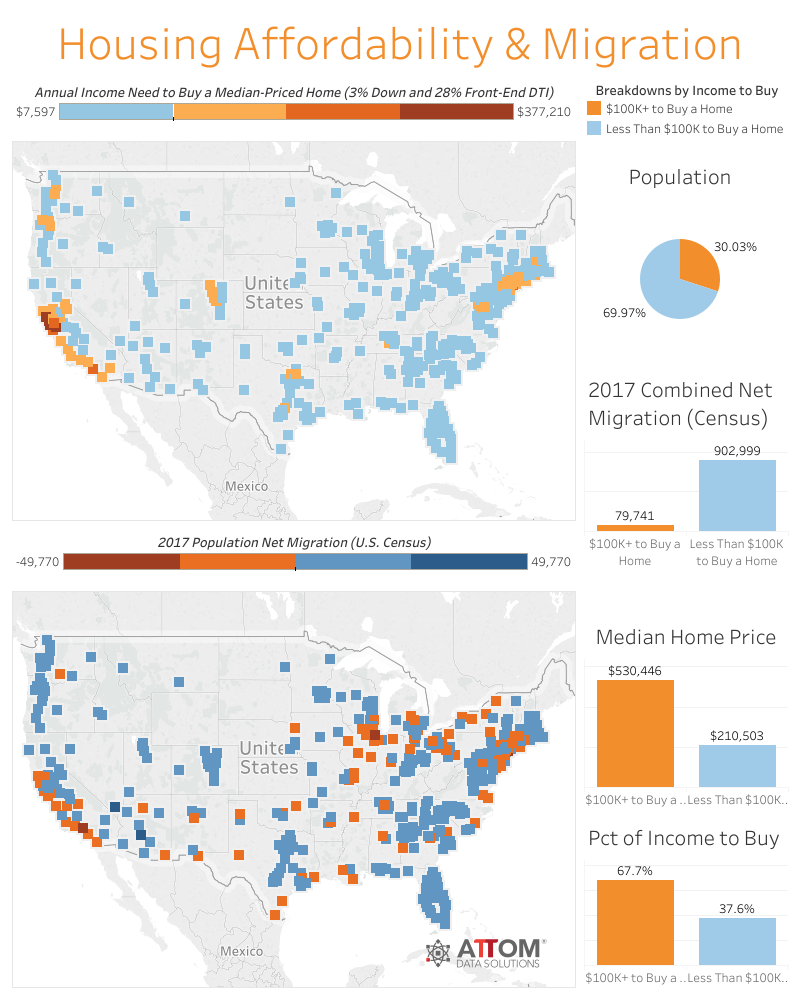