According to ATTOM Data Solutions Q3 2019 U.S. Foreclosure Market Report, there was a total of 143,105 U.S. properties with foreclosure filings -- default notices, scheduled auctions or bank repossessions -- in the third quarter, down 6 percent from the previous quarter and down 19 percent from a year ago to the lowest level since Q2 2005 -- a more than 13-year low.

"Foreclosure activity continues to decline across the country, which is a good sign that the housing market and the broader economy remain strong - and that the lending excesses that helped bring down the economy during the Great Recession remain a memory," said Todd Teta, chief product officer at ATTOM Data Solutions. "This is not to say that everything in the latest foreclosure picture is rosy. Some states have seen their foreclosure rates increase this year, which could cause some concern. But overall, the foreclosure numbers reflect a market in which buyers can afford their homes and lenders remain careful in loaning to home buyers who have little chance of repaying."

Foreclosure starts down nationwide, up in 30 percent of local markets

Lenders started the foreclosure process on 78,394 U.S. properties in Q3 2019, down 8 percent from the previous quarter and down 15 percent from a year ago -- the 17th consecutive quarter with a year-over-year decrease in foreclosure starts.

Counter to the national trend, 14 states posted year-over-year increases in foreclosure starts in Q3 2019, including Montana (up 33 percent); Georgia (up 32 percent); Washington (up 16 percent); Louisiana (up 15 percent); and Michigan (up 12 percent).

Also counter to the national trend, 66 of 220 metropolitan statistical areas analyzed in the report (30 percent) posted a year-over-year increase in foreclosure starts in Q3 2019. Those markets with at least 1 million people that posted year-over-year increases included, Atlanta, Georgia (up 37 percent); Columbus, Ohio (up 27 percent); San Antonio, Texas (up 24 percent); Portland, Oregon (up 22 percent); and Tucson, Arizona (up 21 percent).

Lenders repossessed 34,432 U.S. properties through foreclosure (REO) in Q3 2019, up 6 percent from the previous quarter but down 33 percent from a year ago.

Counter to the national trend, 16 states posted quarter-over-quarter decreases in REO activity in Q3 2019, including Maryland (down 37 percent); Tennessee (down 19 percent); Delaware (down 16 percent); New Jersey (down 13 percent); and Arizona (down 11 percent). 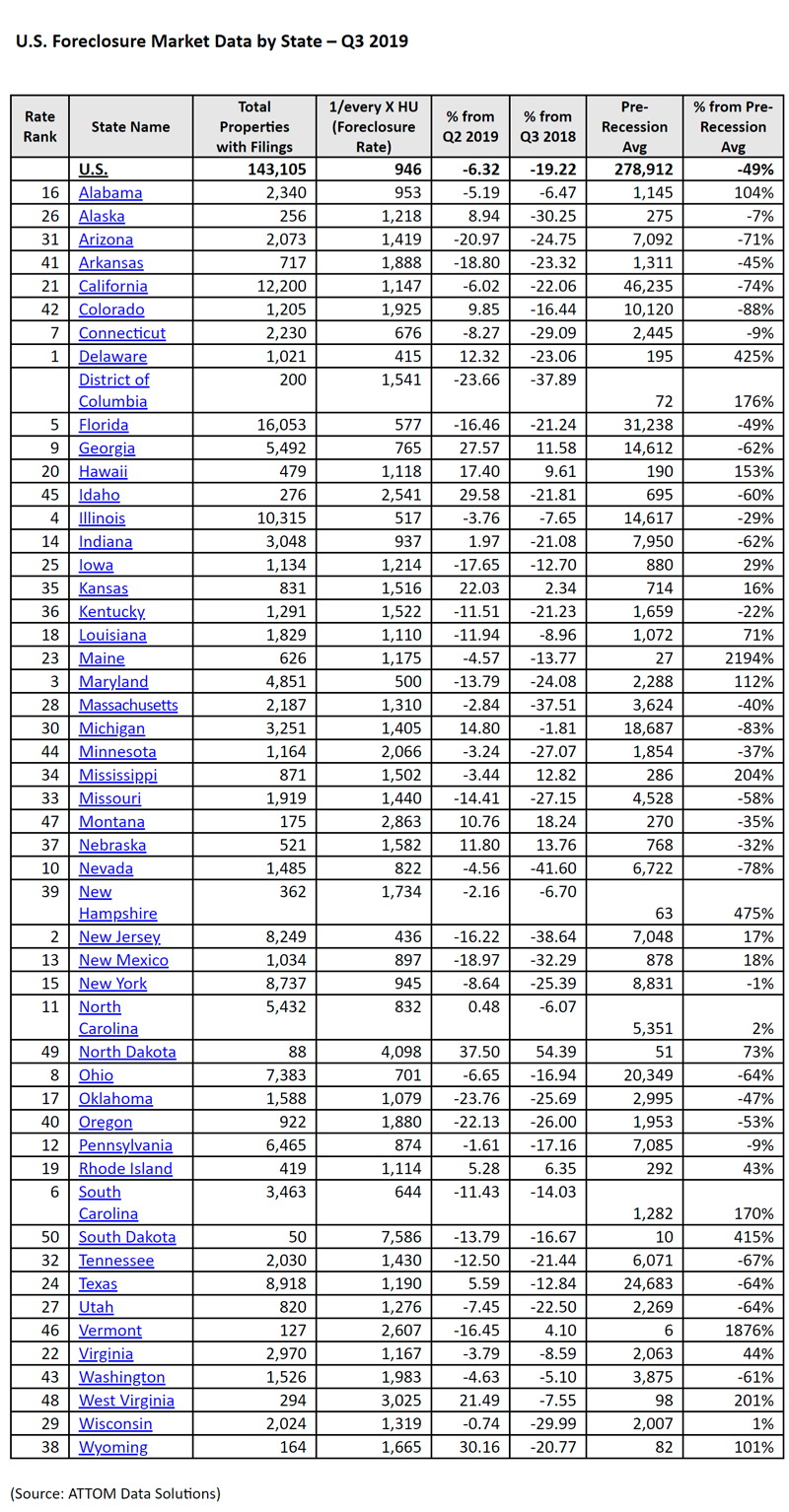