Foreclosure Activity in U.S. Down 21 Percent Annually in July

Lenders started the foreclosure process for the first time on 26,055 property owners in July 2019, up 6 percent from the previous month but down 14 percent from a year ago.

Counter to the national trend, 21 states and the District of Columbia posted year-over-year increases in foreclosure starts, including Washington (up 55 percent); Georgia (up 44 percent); Arizona (up 28 percent); North Carolina (up 7 percent); and Colorado (up 3 percent).

Counter to the national trend, 97 of 220 metro areas analyzed in the report posted year-over-year increases in foreclosure starts, including Atlanta, Georgia (up 48 percent); San Francisco, California (up 3 percent); Phoenix, Arizona (up 14 percent); Seattle, Washington (up 40 percent); and St. Louis, Missouri (up 3 percent).

Lenders repossessed 11,070 U.S. properties in July 2019 (REO), up 4 percent from the previous month and down 42 percent from a year ago, following nine consecutive months of year-over-year decreases.

Counter to the national trend, 28 out of 220 metro areas analyzed in the report posted a year-over-year increase in REOs in July, including Cincinnati, Ohio (up 33 percent); Jacksonville, Florida (up 15 percent); Birmingham, Alabama (up 63 percent); Fresno, California (up 13 percent); and Omaha, Nebraska (up 16 percent). 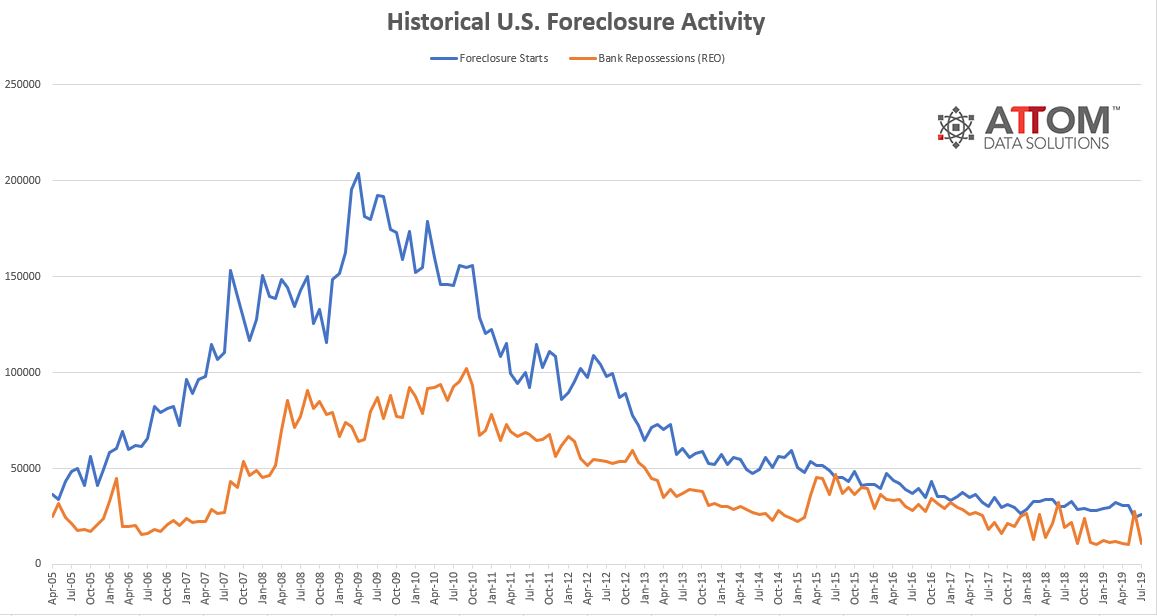