According to their study, the average annual gross rental yield (annualized gross rent income divided by median purchase price of single family homes) among the 375 counties was 9.0 percent for 2017, down from an average of 9.1 percent in 2016.

"While good returns on single family rentals are hard to come by in high-priced coastal markets and in some other housing hot spots such as Denver and parts of Dallas, Austin and Nashville, solid returns on single family rentals will continue to be available in many parts of the Southeast, Rust Belt and Midwest for investors purchasing in 2017," said Daren Blomquist, senior vice president at ATTOM Data Solutions. "And single family rentals should continue to yield strong returns in many parts of the country going forward given the market undercurrents of low rent-ready housing inventory and low homeownership rates. Average fair market rents increased in 2017 in 86 percent of the markets we analyzed even while average wage growth outpaced rent growth in 67 percent of markets -- a recipe for sustainable growth in the rental market."

"Unlike their apartment counterparts, single-family home rental rates in the greater Seattle area have leveled off significantly," said Matthew Gardner, chief economist at Windermere Real Estate, covering the Seattle market, where in King County the annual gross rental yield in 2017 is down from 2016 thanks to median home prices increasing 5 percent compared to a 1 percent increase in average fair market rents. "While home prices in this area continue to see steep increases, rents have not followed suit. I believe this is because the incomes of those who rent single-family homes are not keeping pace with rising home prices, so rents have had to adjust to the realities of the market.

"Single-family home rental rates will likely continue to see very modest increases, as many of these renters are converting to buyers," Gardner continued. "In fact, 'Boomerang Buyers', who were forced to become renters when they lost their homes to foreclosure, are now in a position to qualify for a mortgage again. This process could lead to declining demand for single-family rentals, forcing landlords to adjust their rents accordingly in order to keep their properties occupied."

The report identified and ranked 25 counties with the best potential for future growth in returns on single-family rentals. In all 25 counties, average weekly wages increased at least 5 percent annually and outpaced growth in fair market rents. All 25 counties also had gross annual yields of 9.5 percent or higher.

The report also identified and ranked the 10 best counties for renting single-family homes to millennials. In all 10 counties, the millennial share of the population increased at least 5 percent between 2014 and 2015 -- the most recent data available from the Census Bureau -- and millennials accounted for at least 20 percent of the total population in 2015. All 10 counties also posted annual wage growth. For purposes of the report, millennials were defined as anyone born between 1979 and 1994, limiting it to millennials at least 20 years old in 2014 and likely to be potential homebuyers. 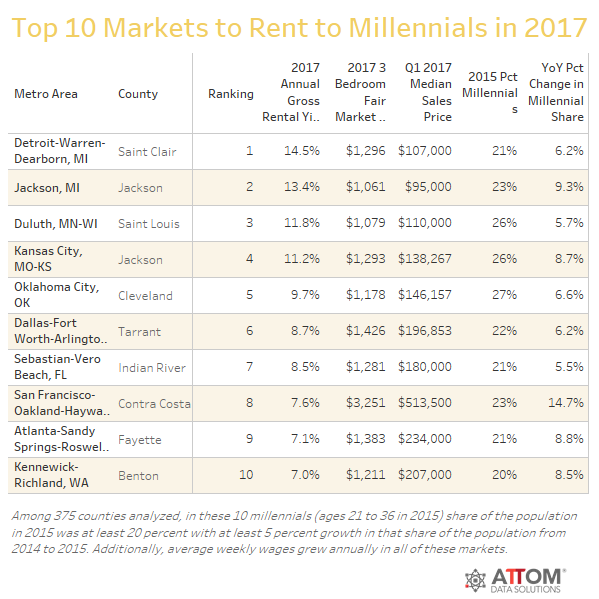 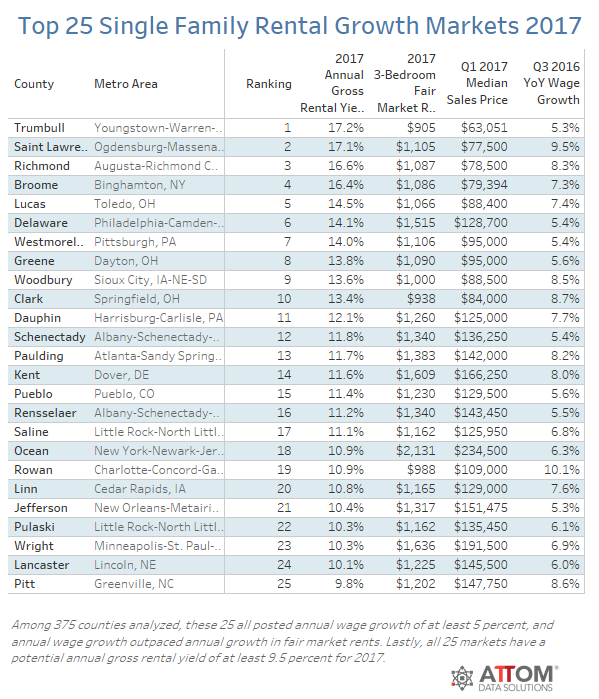