According to the California Association of Realtors, California's housing market accelerated in April 2015 as the spring home-buying season kicked off with both higher home sales and prices for the third straight month.

Home sales rose above the 400,000 mark in April for the first time since October 2013 to post the highest level since August 2013. Closed escrow sales of existing, single-family detached homes in California totaled a seasonally adjusted annualized rate of 427,620 units in April, according to information collected by C.A.R.

The statewide sales figure represents what would be the total number of homes sold during 2015 if sales maintained the April pace throughout the year.  It is adjusted to account for seasonal factors that typically influence home sales.

The April figure was 9.2 percent higher than the revised 391,440 homes sold in March. Home sales were up 9.3 percent from a revised 391,330 in April a year ago, and the increase was the highest year-over-year change since May 2012.

"It's encouraging that the spring home-buying season is off to such a strong start," said C.A.R. President Chris Kutzkey. "Sales activity is at the highest level in the last year and a half, and should remain solid throughout the rest of the season.  We are finally seeing some of the pent-up housing demand that we talked about in the past turning into actual sales, thanks to solid job growth, record-low interest rates, and looser lending requirements."

The median price of an existing, single-family detached California home increased in April from both the previous month and year for the third consecutive month. The median home price was up 2.8 percent from $468,550 in March to $481,760 in April, the highest level since November 2007. April's median price was 7.4 percent higher than the revised $448,720 recorded in April 2014. The median sales price is the point at which half of homes sold for more and half sold for less; it is influenced by the types of homes selling as well as a general change in values.

"While it's a welcomed sign to see the growth in housing demand continue, the lack of supply remains a concern," said C.A.R Vice President and Chief Economist Leslie Appleton-Young. "The imbalance between the two sides not only intensifies market competition and pushes home prices higher, but also leads to housing affordability issues that could ultimately lower the homeownership rate if the problem persists."

Other key facts from C.A.R.'s April 2015 resale housing report include: 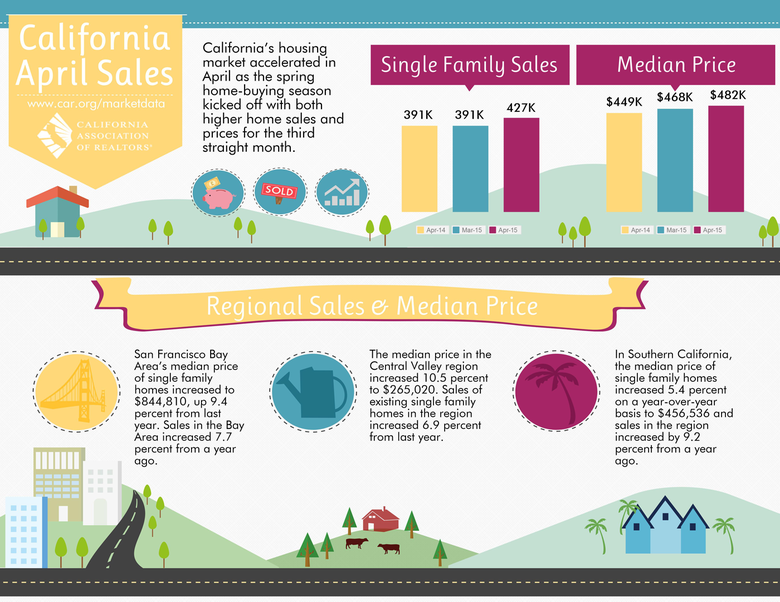