According to the California Association of Realtors, only seven of California's counties are affordable to home buyers who earn the areas' median household income, while 25 counties were out of reach for the typical household income.

Furthermore, less than a third of the state's inventory of available single-family homes, condominiums, and townhomes for sale was at or below the home price that a household earning the California median income of $60,244 can afford.

"The significant disparity between what homebuyers can realistically afford and actual home price is discouraging, especially in the San Francisco Bay Area," said C.A.R. President Chris Kutzkey. "While housing is affordable in some regions of the state, California lacks an adequate supply and mix of affordable housing in locations where the majority of the state's workforce resides."

In the second quarter of 2015, the statewide median price of $446,980 was nearly 50 percent higher than what a California household with the median income of $60,244 could afford to purchase.

Twenty-five of the 32 reporting California counties had a higher median price than the actual home price that a household earning a median income could afford. As expected, San Francisco was the least affordable county where households earning the median income of $75,910, were only able to afford a $383,670 home - a difference of $863,900 or 225 percent, compared to the actual second quarter 2015 median home price of $1,247,570. San Mateo County was the second least affordable county, with the typical median-income household able to afford a $452,020 home, compared to the actual median-priced home of $1,075,390 - a difference of $623,370 or 138 percent.

For the Bay Area, the picture is even bleaker, with San Francisco and San Mateo counties having available, affordable inventory of only 2.1 percent and 3.1 percent, respectively.

Seven of the 32 counties reported by C.A.R. had an inventory of 10 percent or below the corresponding home price that a median-income household can afford, with two counties (San Francisco and San Mateo) having affordable inventory of less than 4 percent.

Only Kings, San Bernardino, and Merced counties had inventory near 50 percent or higher at or below the price that a typical household can afford. 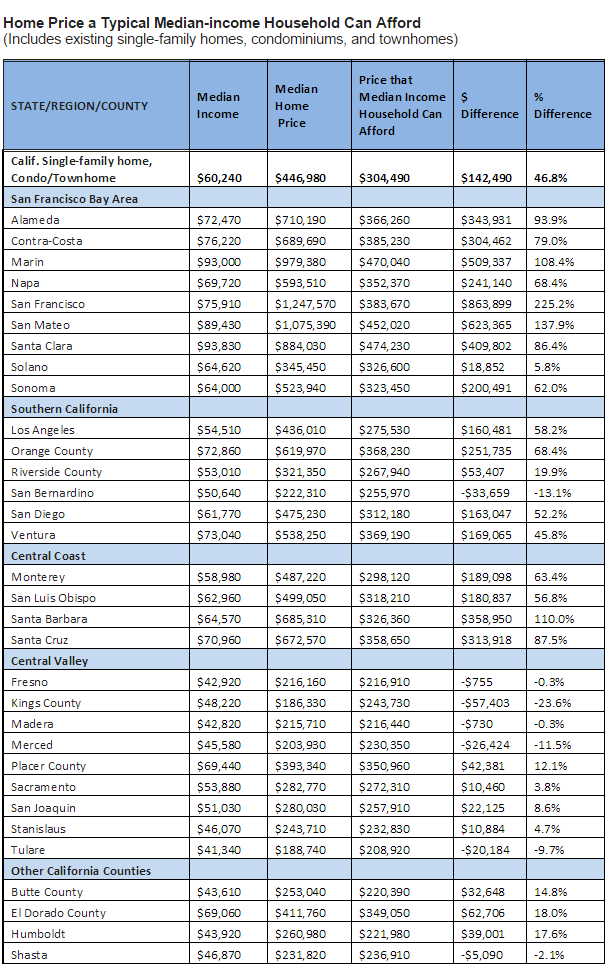