According to the California Association of Realtors, California home sales in March 2016 rose from both the previous month and year to post the highest sales pace in six months, while strained housing supplies continued to push home prices higher.

Closed escrow sales of existing, single-family detached homes in California totaled a seasonally adjusted annualized rate of 415,220 units in March, according to C.A.R. The statewide sales figure represents what would be the total number of homes sold during 2016 if sales maintained the March pace throughout the year.  It is adjusted to account for seasonal factors that typically influence home sales.

"California's housing market is moving in the right direction as we enter the spring home-buying season, but sales growth will likely be isolated in areas where inventory is more abundant and housing affordability is less of an issue," said C.A.R. President Pat "Ziggy" Zicarelli. "For example, in the Bay Area, where inventory is extremely tight, annual sales are down in the double-digits in seven of the region's nine counties. Solano and Sonoma, two counties where homes are relatively more affordable, were the exceptions. Home sales in these two counties grew from last year by nearly 11 percent and 5 percent, respectively."

The median price of an existing, single-family detached California home rose 8.9 percent in March, reversing a two-month decline, to $483,280 from $443,950 in February. March's median price was 4 percent higher than the revised $464,640 recorded in March 2015. The median sales price is the point at which half of homes sold for more and half sold for less; it is influenced by the types of homes selling as well as a general change in values.

"The economic fundamentals continue to support overall home sales growth, but a lack of housing inventory also will fuel more market competition as housing demand remains on an upward trend," said C.A.R. Vice President and Chief Economist Leslie Appleton-Young. "Thin housing supplies appear to be the driving force behind the increase in sales-to-list price ratios, with the ratio rising in 28 of 40 reporting counties. On average, homes in the Bay Area and Sacramento sold for more than the list price, while homes in Southern California and the Central Valley sold below list price."

Other key points from C.A.R.'s March 2016 resale housing report include: 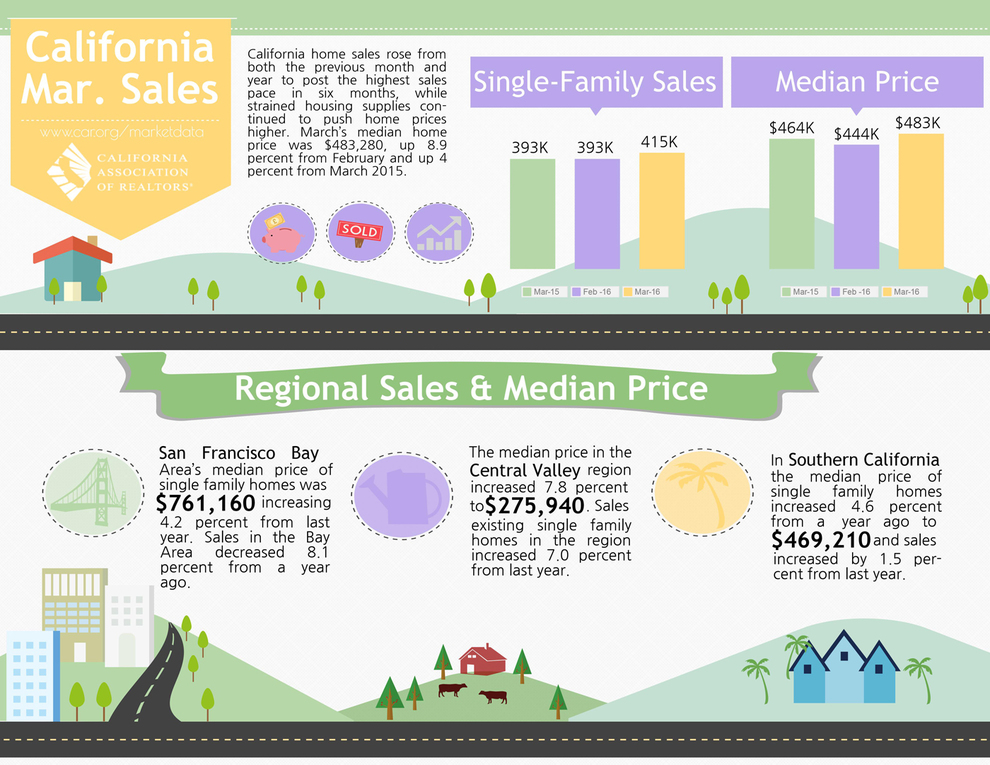