According to CoreLogic's monthly Loan Performance Insights Report, 4.3 percent of U.S. residential mortgages were in some stage of delinquency (30 days or more past due, including those in foreclosure) in March 2018, representing a 0.1 percentage point decline in the overall delinquency rate, compared with March 2017 when it was 4.4 percent.

Measuring early-stage delinquency rates is important for analyzing the health of the mortgage market. To monitor mortgage performance comprehensively, CoreLogic examines all stages of delinquency, as well as transition rates, which indicate the percentage of mortgages moving from one stage of delinquency to the next.

"Unemployment and lack of home equity are two factors that can lead to borrowers defaulting on their mortgages," said Dr. Frank Nothaft, chief economist for CoreLogic. "Unemployment is at the lowest level in 18 years, and for the first quarter, the CoreLogic Equity Report revealed record levels of home equity growth with equity per owner up $16,300 on average for the year ending March 2018."

Since early-stage delinquencies can be volatile, CoreLogic also analyzes transition rates. The share of mortgages that transitioned from current to 30 days past due was 0.7 percent in March 2018, up from 0.6 percent in March 2017. By comparison, in January 2007, just before the start of the financial crisis, the current- to 30-day transition rate was 1.2 percent, while it peaked in November 2008 at 2 percent.

"As we enter the summer, the risk of hurricane and wildfire damage to homes increases as does the risk of damage-related loan default," said Frank Martell, president and CEO of CoreLogic. "Last year's hurricanes and wildfires continue to affect today's default rates. Serious delinquency rates are more than double what they were before last autumn's hurricanes in Houston, Texas, and Naples, Florida. The serious delinquency rates have also quadrupled in Puerto Rico." 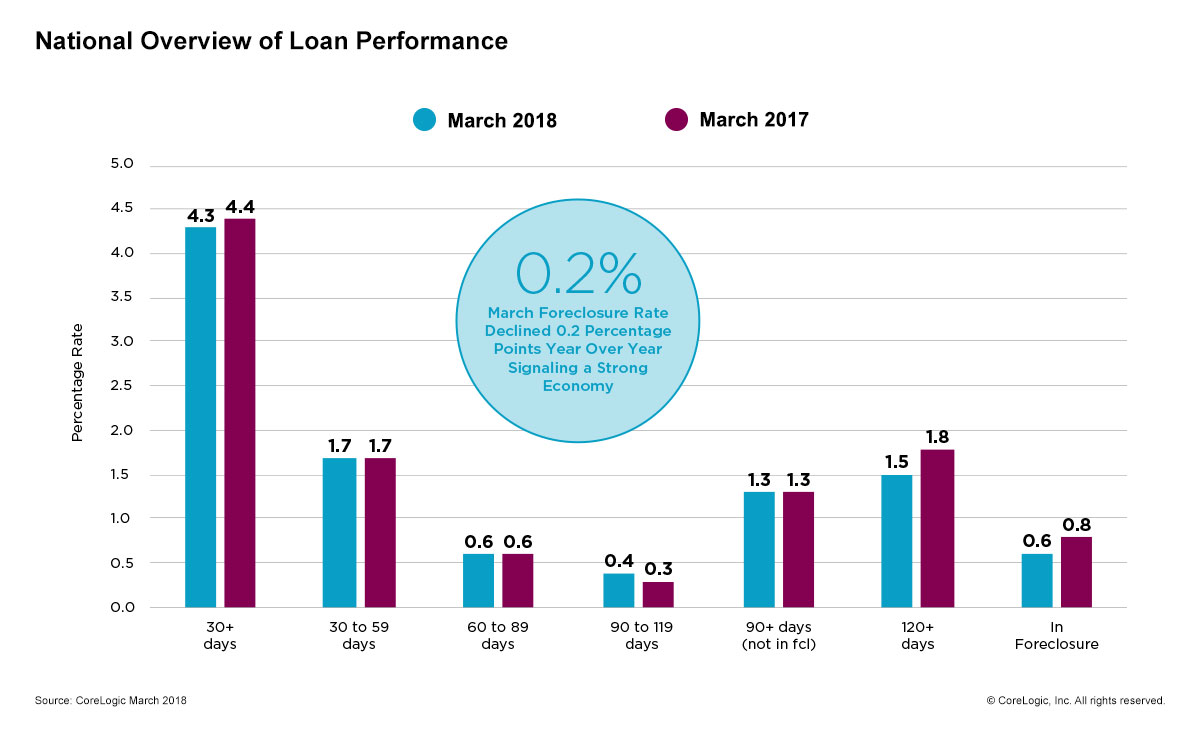 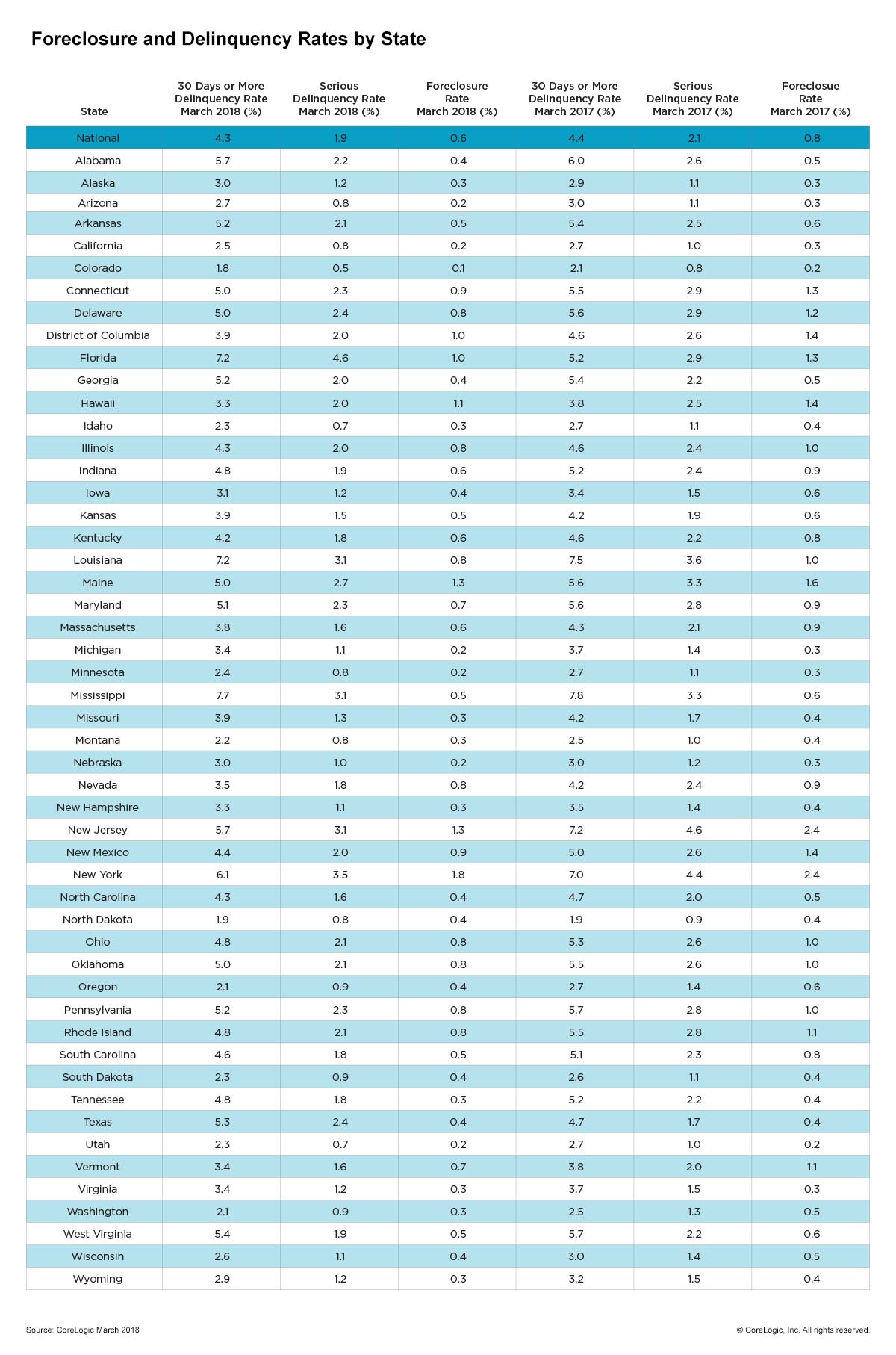 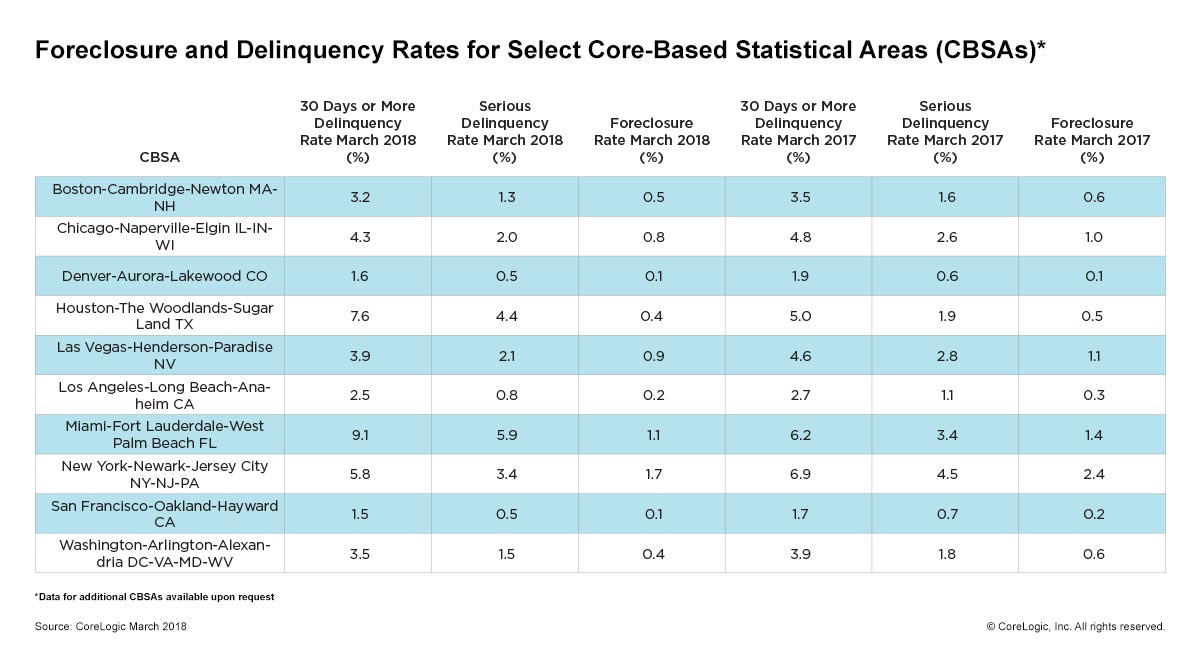