The report also shows that the median sales price of U.S. single family homes and condos in October 2015 was $207,500, up 1 percent from the previous month and up 10 percent from a year ago -- the highest year-over-year percentage increase since February 2014.

The 10 percent increase in October 2015 came following 20 consecutive months of single-digit annual increases in median home sales prices and marked the 44th consecutive month with a year-over-year increase in median home prices. Despite nearly four years of increases, the U.S. median sales price in October was still 9 percent below the previous peak of $228,000 in July 2005.

"Home price appreciation did not go into hibernation in October even as the housing market entered the typically slower fall season," said Daren Blomquist, vice president at RealtyTrac. "More than one-third of the nation's major housing markets have now reached new home price peaks this year, and nearly 90 percent of markets posted an annual increase in home prices in October. Home sellers are sitting pretty in this market, realizing an average profit-since-purchase of 16 percent -- the highest in any month since December 2007, on the cusp of the Great Recession."

Metro areas that have reached new home price peaks in 2015 include Detroit, which hit a new peak in October with a median sales price of $155,000. Other metros that reached a new price peak in 2015 include Dallas, Houston, Atlanta, St. Louis, Denver, Pittsburgh, Charlotte, Portland, San Antonio and Columbus, Ohio.

"While increases in pending sales indicate continued strong demand for housing into 2016, coupled with healthy increases in available housing inventory across the state, there remains concern over a decrease in overall closed volume for the fourth quarter of 2015," said Michael Mahon, president at HER Realtors, covering the Cincinnati, Dayton and Columbus markets in Ohio. "This concern squarely rests on continued delays in the housing transaction cycle involving new government regulatory procedures of TRID (the new integrated loan disclosure forms required at closing). Prior to October 2015, housing transactions were normally trending in the neighborhood of 30 to 45 days to close, but new TRID regulations have pushed current housing transaction to 45 to 70 days to close. These delays are pushing October pending transactions to closings in late November, December, if not January in some instances."

Among 94 major metropolitan statistical areas with 500 or more sales with home price data available in October 2015, 84 (89 percent) saw an increase in sales prices from the previous year, while only 10 metros saw a decline in median sales prices from a year ago.  Those with the biggest annual increase in median sales price were Detroit, Michigan (up 29 percent), Charleston, South Carolina (up 17 percent), Denver, Colorado (up 17 percent), St. Louis, Missouri (up 16 percent), Bridgeport, Connecticut (up 15 percent) and Cape Coral, Florida (up 15 percent).

"With the threat of increasing interest rates that can steal tens of thousands in potential buying power we are seeing home sales increase. Now, more than ever the race for a home in an already ultra-competitive sellers' market becomes as strategic as a Super Bowl defense," said Al Detmer, broker associate at RE/MAX Alliance, covering the Greeley market in Colorado. "The increasing market is two sided as it is a dream for sellers and a nightmare for even the most novice buyer."

Cash sales may be down from their peak of 41.1 percent in February 2011, but October 2015 saw the share of cash sales increase on a monthly basis for the third consecutive month, with all-cash sales accounting for 28.9 percent of all sales during the month -- up from 28.4 percent in the previous month but still down from 30.4 percent a year ago.

"All trends are positive for an improving real estate market in South Florida. Our prices continue to rise due to limited land and an increasing and diverse population," said Mike Pappas, CEO and president of the Keyes Company, covering the South Florida market, where median home prices increased 11 percent from a year ago in October, according to the RealtyTrac data.  "More first-time buyers are entering the market propelled by loosening credit and low down payment requirements of FHA loans. Our distressed market is moving back toward historical norms. Property owners may be surprised at the improvement in equity from the great recession bottom and the timing is good to sell as our inventory is still low."

Counties with biggest home seller gains and losses in October 2015

RealtyTrac analyzed 127 counties with at least 500 sales in October 2015 and where home price data was available both on the most recent purchase and the previous purchase. In 15 of those counties (12 percent) home sellers on average in October sold for a lower price than what they purchased for.

"The Seattle housing market remains remarkably tight and very competitive. Buyers are still fighting over any new listing which is well priced and this has led to rapid price escalation.  As such, we are seeing an average price gain substantially higher than the national average," said Matthew Gardner, chief economist at Windermere Real Estate, covering the Seattle market, where median home prices increased 10 percent from a year ago in October, according to the RealtyTrac data. "I believe we will start to see sellers come to market in greater numbers in 2016 as they look to lock in the growth in value that they have seen in recent years. This is fairly intuitive as mortgage rates are expected to rise in the coming year which will certainly lead to slowing home price growth. It remains a challenging market for first-time buyers in Seattle. Even with the growth in low down payment programs (FHA), housing here is expensive -- especially in areas close to the job centers. Unless we see an increase in new, affordable housing, which is unlikely, it will continue to be a challenge for those trying to buy their first home."

Buyers using Federal Housing Administration (FHA) loans -- typically low down payment loans utilized by first time homebuyers and other buyers without equity to bring to the closing table -- accounted for 16.1 percent of all single family home and condo sales with financing -- excluding all-cash sales -- in October 2015, down from 16.9 percent in the previous month but up from 12.6 percent in October 2014.

Sales of homes to institutional investors -- entities that purchase at least 10 properties during a calendar year -- accounted for 3.6 percent of all single family home and condo sales in October, unchanged from the previous month but down from 5.5 percent in October 2014.

"It's interesting to note that the top four markets for institutional investors are all small- to medium-sized markets near military bases," Blomquist noted.

Bank-owned sales continue to decline in 2015

Short sales decrease month over month and year over year

Short sales accounted for 5.2 percent of all single family and condo sales in October, unchanged from the 5.2 percent in the previous month but down from 5.5 percent a year ago. 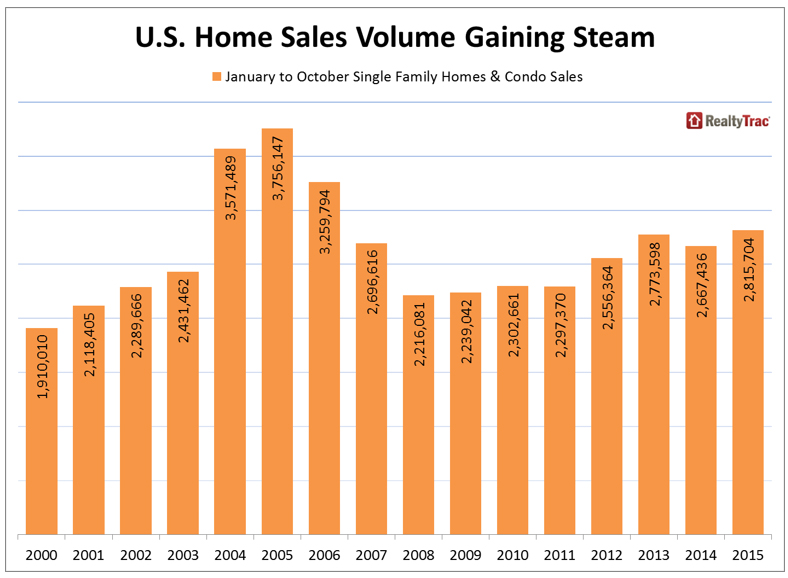