That is more than $323 billion of added property taxes nationwide

The report analyzed property tax data collected from county tax assessor offices nationwide at the state, metro and county levels along with estimated market values of single-family homes calculated using an automated valuation model (AVM). The effective tax rate was the average annual property tax expressed as a percentage of the average estimated market value of homes in each geographic area.

"Homeowners across the United States in 2020 got hit with the largest average property tax hike in the last four years, a sign that the cost of running local governments and public school systems rose well past the rate of inflation. The increase was twice what it was in 2019," said Todd Teta, chief product officer for ATTOM Data Solutions. "Fortunately for recent home buyers, they have mortgages with super-low interest rates that somewhat contain the cost of home ownership. But the latest tax numbers speak loud and clear about the continuing pressure on both recent and longtime homeowners to support the rising cost of public services."

New Jersey had the highest average property tax on single-family homes, $9,196. That was more than 10 times over than the average tax of $841 in Alabama, the state with the lowest average levy.

Among 220 metropolitan statistical areas around the country with a population of at least 200,000 in 2020, 12 of the top 20 effective tax rates were in the Northeast.

Other major markets posting an increase in average property taxes that was above the national average included San Diego, CA (up 10.2 percent); Tampa, FL (up 10 percent); Denver, CO (up 9.9 percent); Raleigh, NC (up 9.7 percent) and Columbus, OH (up 9.1 percent).

Sixteen counties with average annual property taxes of more than $10,000 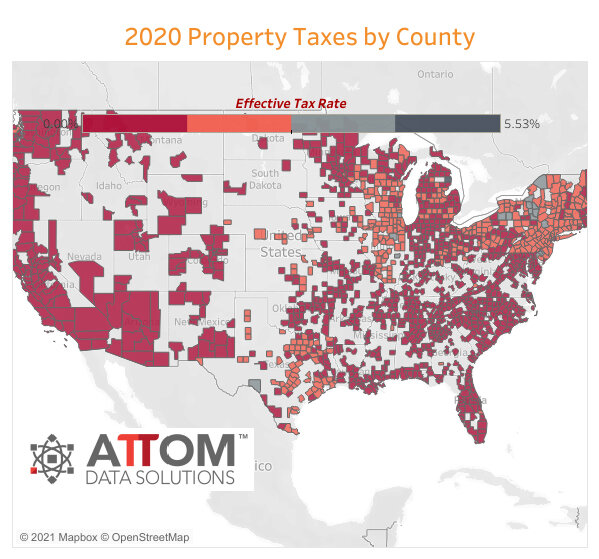