According to ATTOM Data Solutions third-quarter 2020 U.S. Home Flipping Report, 57,155 single-family homes and condominiums in the United States were flipped in the third quarter of 2020.

The gain pushed profit margins up, with the typical gross flipping profit of $73,766 in the third quarter translating into a 44.4 percent return on investment compared to the original acquisition price. The gross flipping ROI was up from 42.9 percent in the second quarter of 2020 and 40.3 percent a year ago. The improvement in the typical ROI marked the second consecutive year-over-year increase following nine straight quarters of declines. 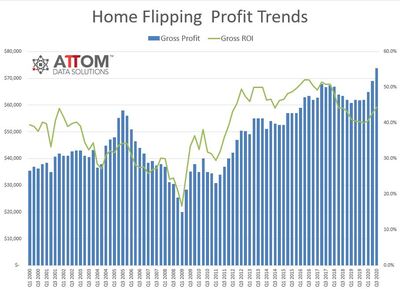 The continuation of opposing trends, with flipping rates down but profits up, reflected broader national housing market patterns as the worldwide Coronavirus continued spreading across the United States. Home prices kept soaring throughout most of the country in the third quarter as buyers - often seeking larger or more wide-open spaces - chased a dwindling supply of homes for sale. Rising values continued pushing a nine-year boom in the housing market even as much of the economy struggled to overcome high unemployment and other damage from the pandemic.

"Home-flipping again generated higher profits on less transactions across the United States in the third quarter of 2020 as investors continued to make more money on a declining number of deals," said Todd Teta, chief product officer at ATTOM Data Solutions. "This all happened in the context of the pandemic, which has created unusual circumstances for the housing market to thrive, and that has included the home-flipping business. Too much is uncertain these days to say whether the latest trends will continue. But for now, the prospects continue looking up for home flipping after a period when they were trending the opposite way."

Among those metro areas, the largest quarterly decreases in the home flipping rate came in Killeen, TX (rate down 44.5 percent); Savannah, GA (down 43 percent); York, PA (down 42 percent); Greeley, CO (down 41.5 percent) and Springfield, MA (down 39.8 percent). 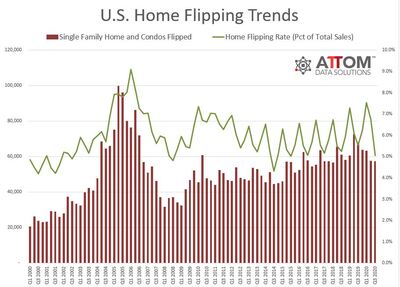 Aside from Austin, TX, metro areas with a population of at least 1 million that had the biggest annual increases in flipping profit margins in the third quarter of 2020 were Raleigh, NC (ROI up 74 percent); Phoenix, AZ (up 69.8 percent); Kansas City, MO (up 55.9 percent) and Las Vegas, NV (up 54.4 percent).

Median resale prices on home flips in the third quarter of 2020 were at least twice the median investor purchase prices compared to a year earlier in 14 of the 159 metro areas with enough data to analyze (8.8 percent).

Home flips purchased with financing or cash remain about the same

Among metropolitan statistical areas with a population of 1 million or more and sufficient data to analyze, those with the highest percentage of flips purchased with financing in the third quarter of 2020 were Seattle, WA (61.2 percent); San Diego, CA (58.7 percent); San Jose, CA (58.2 percent); Louisville, KY (53.9 percent); and San Francisco, CA (53.8 percent).

Of the 57,155 U.S. homes flipped in the third quarter of 2020, 14.7 percent were sold to buyers using loans backed by the Federal Housing Administration (FHA), down from 15.3 percent in the prior quarter, but up from 13.6 percent in the same period a year ago.