According to the National Association of Realtors, existing-home sales rose in January 2021, marking two consecutive months of growth. From a month-over-month perspective, buying activity varied in the major regions. Year-over-year, all four areas recorded double-digit gains in January.

Total existing-home sales, completed transactions that include single-family homes, townhomes, condominiums and co-ops, increased 0.6% from December to a seasonally-adjusted annual rate of 6.69 million in January. Sales in total climbed year-over-year, up 23.7% from a year ago (5.41 million in January 2020).

"Home sales continue to ascend in the first month of the year, as buyers quickly snatched up virtually every new listing coming on the market," said Lawrence Yun, NAR's chief economist. "Sales easily could have been even 20% higher if there had been more inventory and more choices."

Whereas much of the economy has suffered due to COVID-19, the housing sector has been one of the few bright spots, according to Yun. In NAR's latest quarterly report, released last week, home prices in every tracked U.S. metro area increased during the fourth quarter of 2020.

"Home sales are continuing to play a part in propping up the economy," Yun said. "With additional stimulus likely to pass and several vaccines now available, the housing outlook looks solid for this year."

Yun says he expects more jobs to return, which will spur home buying in the coming months. He predicts existing-home sales will reach at least 6.5 million in 2021, even as he says mortgage rates are likely to inch higher due to the rising budget deficit and higher inflation.

Total housing inventory at the end of January amounted to 1.04 million units, down 1.9% from December and down 25.7% from one year ago (1.40 million). Unsold inventory sits at a 1.9-month supply at the current sales pace, equal to December's supply and down from the 3.1-month amount recorded in January 2020. NAR first began tracking the single-family home supply in 1982.

Distressed sales - foreclosures and short sales - represented less than 1% of sales in January, equal to December's percentage but down from 2% in January 2020.

"This year, more than ever, we are prepared and eager to help families and neighbors secure housing," said NAR President Charlie Oppler. "NAR is working to close the racial homeownership gap, secure equal access to housing for all Americans and address housing affordability issues plaguing communities across the country."

Existing condominium and co-op sales were recorded at a seasonally-adjusted annual rate of 760,000 units in January, up 4.1% from December and up 28.8% from one year ago. The median existing condo price was $269,600 in January, an increase of 8.6% from a year ago.

Compared to one year prior, median home prices rose at double-digit rates in each of the four major regions. 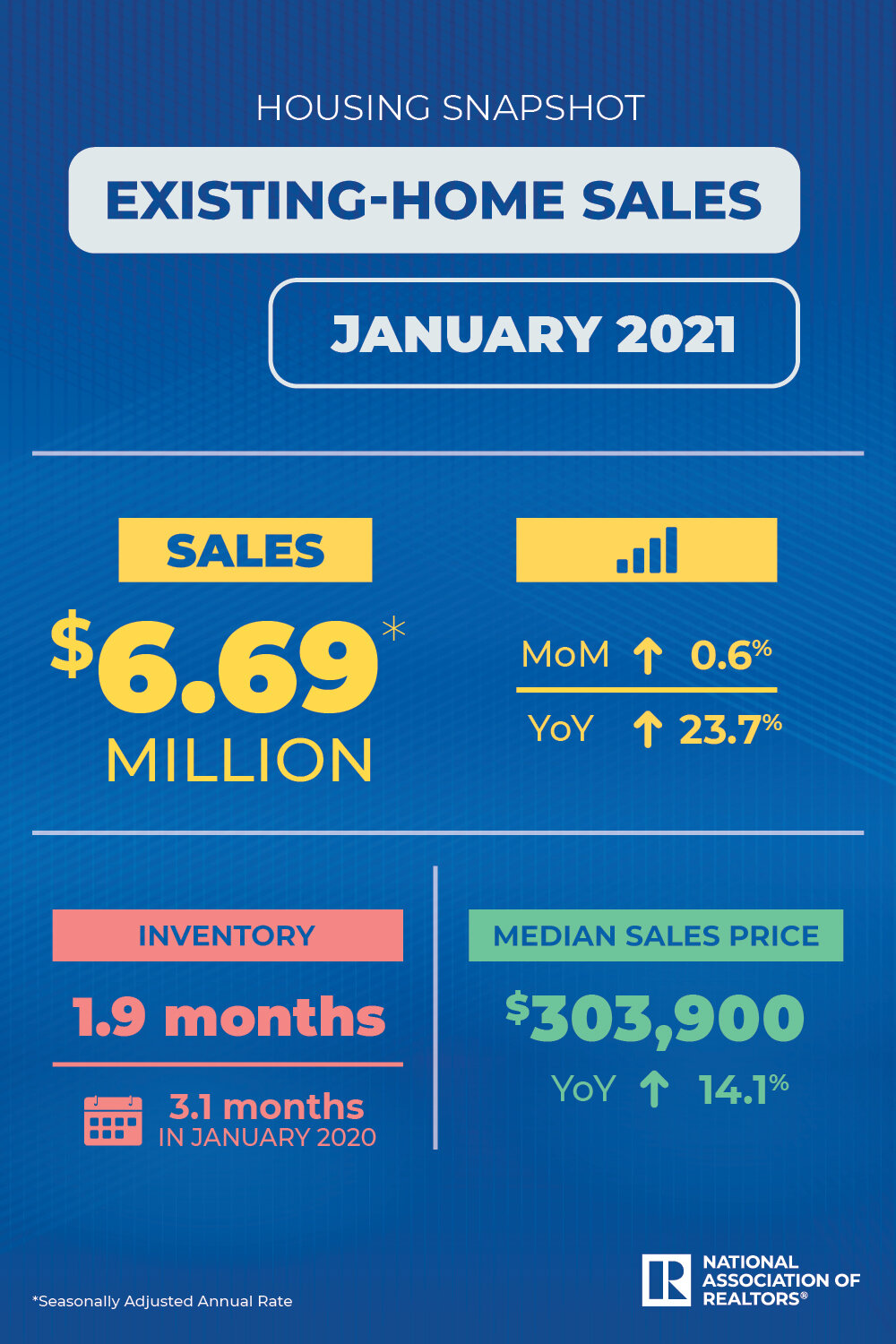