According to RealtyTrac's new Residential Rental Property Analysis Report for U.S. residential properties purchased in the first quarter of 2015, the monthly house payment on a median-priced home is more affordable than the monthly fair market rent on a three-bedroom property in 76 percent of the U.S. counties surveyed.

RealtyTrac's analysis included 461 counties nationwide with a population of at least 100,000 and sufficient home price, income and rental data. The combined population in the 461 counties analyzed was 217 million. On average across all 461 counties, fair market rents as set by the U.S. Department of Housing and Urban Development represented 28 percent of the estimated median household income, while monthly house payments on a median-priced home -- with a 10 percent down payment and including property taxes, home insurance and mortgage insurance -- represented 24 percent of the estimated median income.

"From a purely affordability standpoint, renters who have saved enough to make a 10 percent down payment are better off buying in the majority of markets across the country," said Daren Blomquist, vice president at RealtyTrac. "But factors other than affordability are keeping many renters from becoming buyers, a reality that means real estate investors buying residential properties as rentals still have the opportunity to make strong returns in many markets across the country.

"Also keep in mind that in some markets buying may be more affordable than renting, but that doesn't mean buying is truly affordable by traditional standards," Blomquist added. "In those markets renters are stuck behind a rock and hard place when it comes to deciding whether to try to buy or continue renting."

56 markets with most favorable conditions for buying rather than renting

There were 351 counties out of the 461 analyzed (76 percent) where house payments on a median-priced home in the first quarter of 2015 were lower than fair market rents on three-bedroom homes.

Among these 351 counties, there were 56 counties where home prices rose at least 7 percent compared to a year ago and wages rose at least 3 percent annually -- additional factors that could make owning a home more attractive than renting. Wages were from the most recent weekly wage data available from the Bureau of Labor Statistics, the third quarter of 2014.

"When considering the financial aspects of renting verses owning within the majority of the Ohio markets, the better financial opportunity is in ownership," said Michael Mahon, executive vice president at HER Realtors, covering the Ohio housing markets of Cincinnati, Dayton and Columbus. "With many markets in Ohio seeing double-digit appreciation year over year, the cost of homeownership and renting will only go up in future years, while purchasing options offer attractive low interest rates for homeowners to stabilize monthly household expenses, while equally building equity within their household investments.

"As wage growth continues to stagnate, those consumers choosing to rent will see more and more of their net wages being devoted to increased housing costs in the future," Mahon added.

"As wages continue to lag home price appreciation in Southern California, and a significant percentage of buyers still coming from outside and internationally, the need for rental units will continue to grow," said Mark Hughes, chief operating officer with First Team Real Estate, covering the Southern California market, where the fair market rent on a three-bedroom home in Los Angeles County requires 42 percent of the median household income and where house payments on a median priced home require 61 percent of the median household income. "The inequity between service wages and property costs in our region lends itself to a high rental population of folks that may have been priced out of buying.  I recommend that renters who are able to purchase do so with a four- to five-year ownership horizon."

58 emerging rental markets on the rise

There were still 115 counties where potential annual gross rental yields increased compared to a year ago, and among those there were 58 counties that also saw rising rental rates, rising home prices and rising average weekly wages.

"Buying single family homes as rental properties in Southern California is reserved for those that have a very specific investment strategy," said Chris Pollinger, senior vice president of sales with First Team Real Estate, covering the Southern California market, where annual gross yields on rentals range from less than 5 percent in Orange County to nearly 9 percent in the inland San Bernardino County. 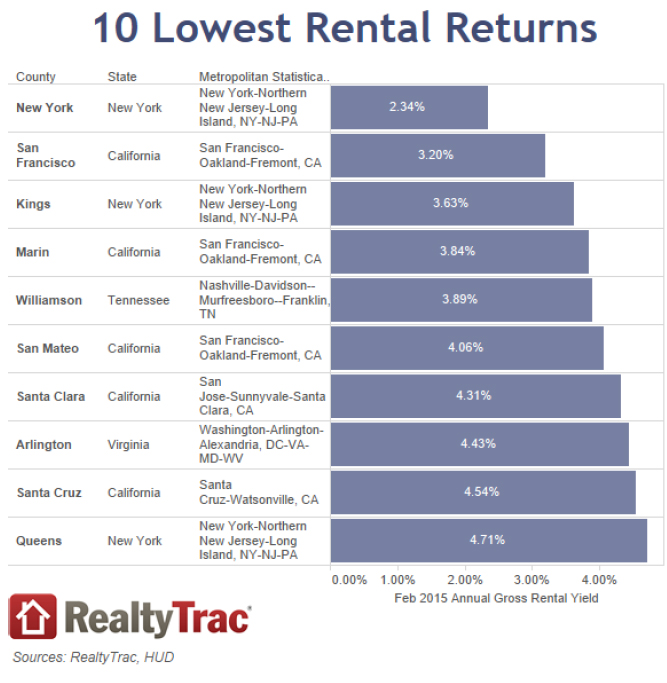 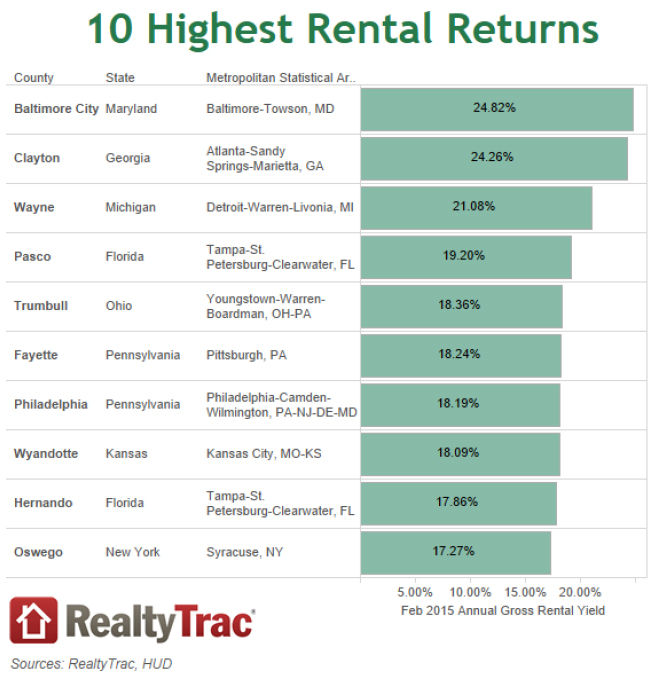 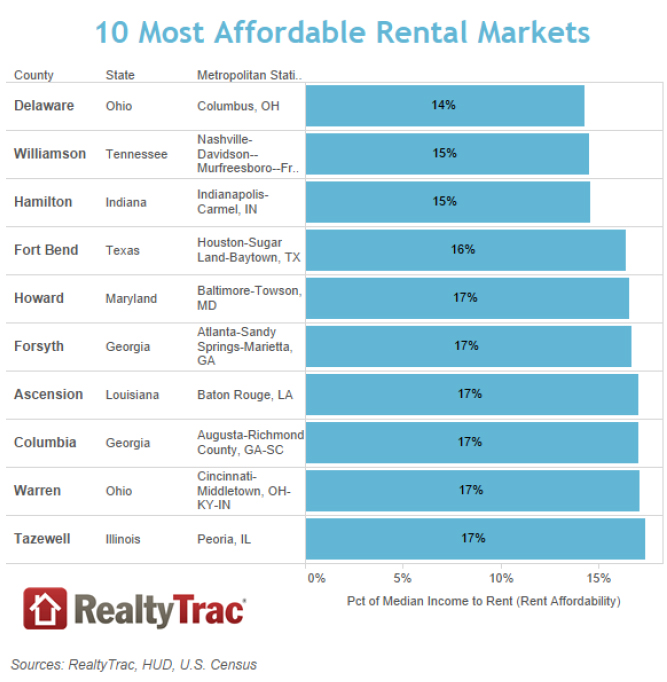 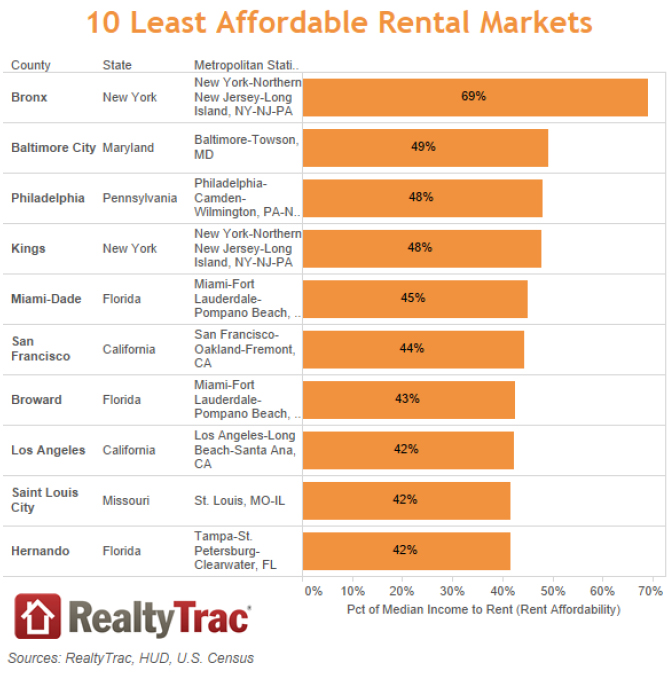